Anthology Film Archives is an international center dedicated to the preservation, study, and exhibition of film and video, with a particular focus on independent, experimental, and avant-garde cinema. GVSHP is proud to honor Anthology Film Archives with a 2018 Village Awards at our upcoming June 6th Annual Meeting & Award Ceremony. Click here for more information about the event and to RSVP.

“I am awed by what Anthology Film Archives has accomplished over the years. Anthology’s commitment to the history of avant-garde cinema, as well as its role in showcasing new artists, makes it essential to the intersecting spheres of art, culture, and education.”  – Martin Scorsese

There is simply nothing like Anthology Film Archives (AFA) in NYC or anywhere else in the world in terms of its sole focus on the art and culture of avant-garde film. It was founded in 1970 when Lithuanian émigré and artist Jonas Mekas and four other film devotees envisioned a permanent home for independent films. The organization’s original home was at The Public Theater. Three moves later, in 1988, it arrived at its present Second Avenue location. This building was a municipal courthouse and jail designed by architect Alfred Hopkins, built 1917-19 in the Renaissance Revival style. As Manhattan’s 3rd District courthouse, it was known as the Essex Market Courthouse.

Mr. Mekas describes his purchase of the building from the city in 1979 in an oral history conducted with GVSHP:

“When I bought [the Courthouse that became the Anthology Film Archives, the neighborhood people kept asking me, “Do] you really think you can do something with this building in this drug-infested neighborhood?” Because many other buildings were in ruins on 1st Street, and all around the neighborhood there. And people thought it was hopeless. They didn’t even want to start fixing their buildings, because once a week the police used to close the ends of 2nd Street, between Avenue A and Third Avenue, and swoop. Every morning you’d come in and you’d find all the leftovers. You can recognize on the street what drugs they were using. And the police used to arrest [them]. But then the next day they were all there again. It was a drug area. So once we moved [in], after I bought the building, the neighborhood [said], “Really? You think you can do something with it?” I said, “Yes, I’m going to do it. We are staying here.” So then they began thinking and began fixing. They created the block association to fight drug [peddlers] and worked with the police. And within like two, three years, the neighborhood changed completely. They began fixing the buildings. So that was the result of me [buying] and beginning to fix up [the] courthouse building.”

Mr. Mekas, currently the President of the Board and Artistic Director, established a “cathedral of cinema in this ruin of a courthouse. What we have in this museum is equivalent to what (the) Museum of Modern Art and Metropolitan, put together, have of the modern art. That is what we have in this building of the modern cinema.”  The renovation cost $1.4 million and took nearly almost 10 years.

Now led by Director John Mhiripiri, AFA screens more than 1,1 00 programs to over 50,000 individuals each year.  It has two movie theaters and state-of-the-art digital and video production equipment and presents films on 16mm, 35mm, and other formats.  It also hosts scholars and researchers and publishes books and DVDs.  Its Essential Cinema Screenings are free to its members.

AFA has preserved over 1,000 works in various formats. They have restored rare films and videos, and created high-definition digital transfers.  Their archive is enormous and includes 20,000 films, 5,000 videos, 2,000 audio tapes and a library of books, periodicals, photographs, posters, and other materials.  Their goal is to protect and preserve art that is in danger of being lost, overlooked or ignored. Among the historically precious and significant inventory AFA houses and preserves are films by Charlie Chaplin, Buster Keaton, Laurel & Hardy, Jean Cocteau, Serge Eisenstein, Jean Genet, Leni Riefenstahl, Andy Warhol, and Orson Welles, including the original shooting script for Citizen Kane.

AFA is on the cusp of an expansion project. This $12.5 million undertaking will enlarge the facility from 20,000 to 35,000 square feet. Designed by Bone/Levine Architects, it will add a 4th floor to the building in which there will be a public library, a street-level café, a rooftop terrace, interior renovations, and an elevator that will make it ADA accessible.  The groundbreaking is planned for spring 2019 with a re-dedication opening for late 2020 (which will mark AFA’s 50th anniversary).

GVSHP felt the proposed additions o the building were thoughtful, reasonable, and respectful of the existing building. The proposed rooftop addition is a skillful solution that presents as a modern version of a classical attic story. The transparent treatment at the parapet of the roof terrace is particularly interesting. The glass-enclosed stair addition is a clever solution that will provide a successful transition between this building and the neighboring building.

Read more here about the history of 32 2nd Avenue, the building which now houses the Anthology Film Archives. And click here to RSVP to the 2018 Village Awards. 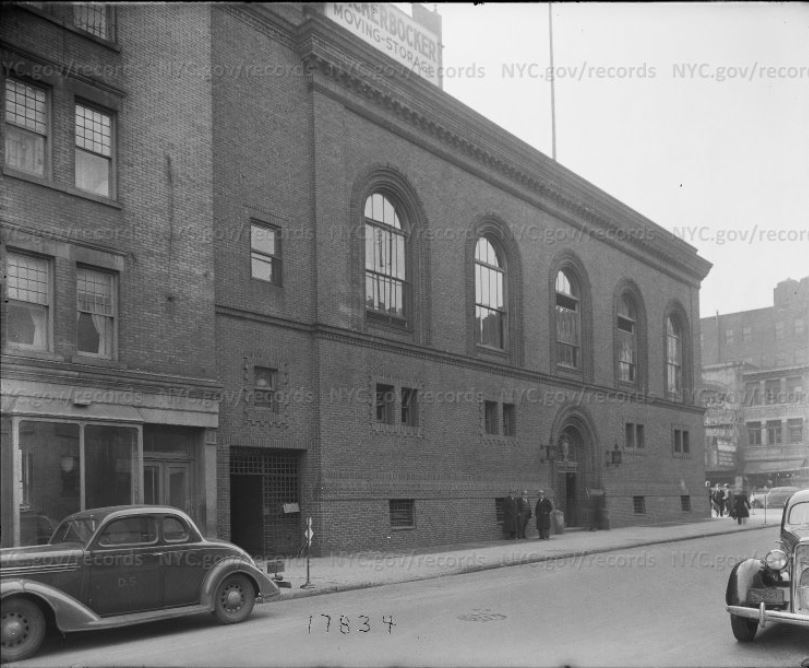