Are you one of the many people who has had to take on the seemingly all-powerful Real Estate Board of New York (REBNY) in a real estate/preservation fight?  Sometimes it may seem like REBNY and the other forces of Big Real Estate control everything in New York City.  But we’ve actually tangled with the well-funded lobbying juggernaut quite a few times, and won.  And a recent document we uncovered reminded us of how far back and how deeply rooted REBNY’s objections to landmark preservation are, and just how much of our neighborhoods had to be protected over the objections of this influential and powerful group.

Though GVSHP was founded in 1980, our organization’s original mission was to advocate for and monitor the preservation of the Greenwich Village Historic District, one of the first and largest historic districts considered in New York City.  As you can see from the above letter which we recently stumbled upon, REBNY was an adamant opponent of designation of the Greenwich Village Historic District when it was first proposed in 1965.  According to REBNY, the proposed Greenwich Village Historic District was “not a proper one for designation under the definition of historic district as set forth [under the landmarks law]” which said that “the improvements in the area must (a) have a special character or historical or aesthetic interest or value; and (b) represent one or more periods or styles of architecture typical of one or more eras in the history of the city; (c) cause such an area, by reason of such factors, to constitutue a distinct section of the city.”

While that sounds like the Greenwich Village Historic District to us, REBNY felt quite strongly otherwise, objecting even to the notion that a map was being presented showing this area as a potential district, rather than a list of streets and addresses.  They also objected to the inclusion of both residential and commercial structures, which they seemed to think automatically disqualified the area.  They concluded:

Approval of this proposal would result in an unreasonable restriction of the right of property owners to involved to dispose of their property and a devastating blow to normal progressive development of the area.

Hmmm.  Seems like Greenwich Village has not only developed but thrived under landmark designation.  Forutnately REBNY did not get their way, and the Greenwich Village Historic District, still one of the city’s oldest, largest, and arguably most thriving and successful historic districts, was designated in 1969.

This is not the first time that, fortunately, REBNY has not succeeded in their opposition to preserving our city’s heritage and history.  Most recently with the leadership of Council Member Corey Johnson, GVSHP secured the approval of the Sullivan Thompson Historic District. In opposition to the designation, REBNY even submitted a map saying “if you MUST designate, please eliminate these;”. We are proud to report that none were eliminated. 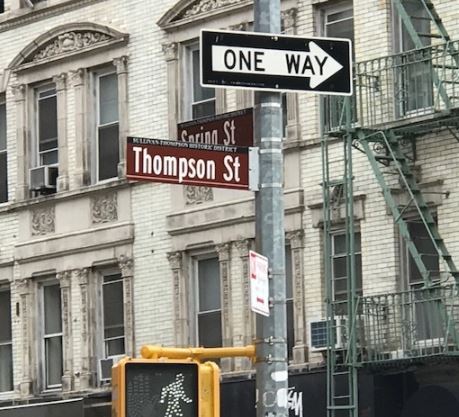 The Sullivan-Thompson Historic District designation was the culmination of a fifteen-year campaign and a proposal advanced by GVSHP to landmark the South Village that resulted in the creation of three new historic districts. 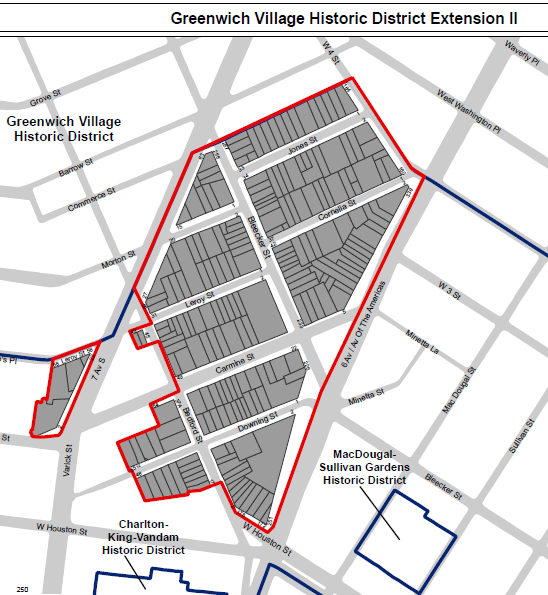 Prior to the Sullivan Thompson District designation, in 2010 GVSHP secured the first phase of our proposed South Village Historic District which was known as the  Greenwich Village Historic Extension II. REBNY opposed this designation as well, which protected over two hundred buildings intimately linked to New York’s immigration and countercultural history in the 19th and 20th centuries.

There were a number of other historic district designations of iconic areas of New York City which were approved over the often adamant objections and opposition o REBNY.

The Gansevoort Market Historic District, proposed by GVSHP in 2001 was approved in 2003 as the first new historic district in Greenwich Village in 34 years! The 112 buildings on 11 blocks protect the city’s distinctive Meatpacking District with its cobblestone streets, warehouses and rowhouses. REBNY strongly opposed this designation, as noted in the district’s designation report. 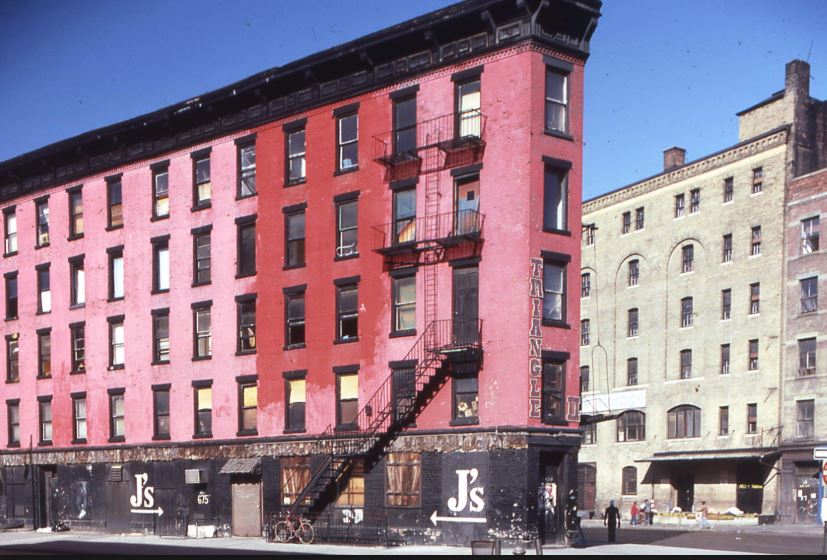 On May 13, 2008, the Landmarks Preservation Commission designated the NoHo Historic District Extension — a designation GVSHP and many others fought many years for, as parts of iconic streets like Bond, Great Jones, and Lafayette Street had been left out of the original NoHo Historic District.  As noted in the district’s designation report, REBNY lobbied to have nineteen properties omitted from the approximately sixty-building district or about one-third of it.

Fortunately they were not, and great buildings like 57 Great Jones Street, which Andy Warhol owned beginning in 1970 and leased it to his friend Jean-Michel Basquiat as a studio and residence from 1983 until his death in 1988 were included in the district (you can read more about the history of the building in this past Off the Grid post, and learn about the historic plaque GVSHP placed upon the building in 2016 here).

In October 2012, the city’s Landmarks Preservation Commission officially designated the East Village/LES Historic District, a district which GVSHP and many in the neighborhood fought very, very hard to see designated.  REBNY opposed designation.  Encompassing three hundred twenty-five buildings and fifteen blocks, and centering along Second Avenue and stretching between East 2nd Street and St. Mark’s Place, it is by far the largest historic district designation in the neighborhood, and encompasses much of the rich artistic, immigrant and religious fabric that makes this neighborhood so special. 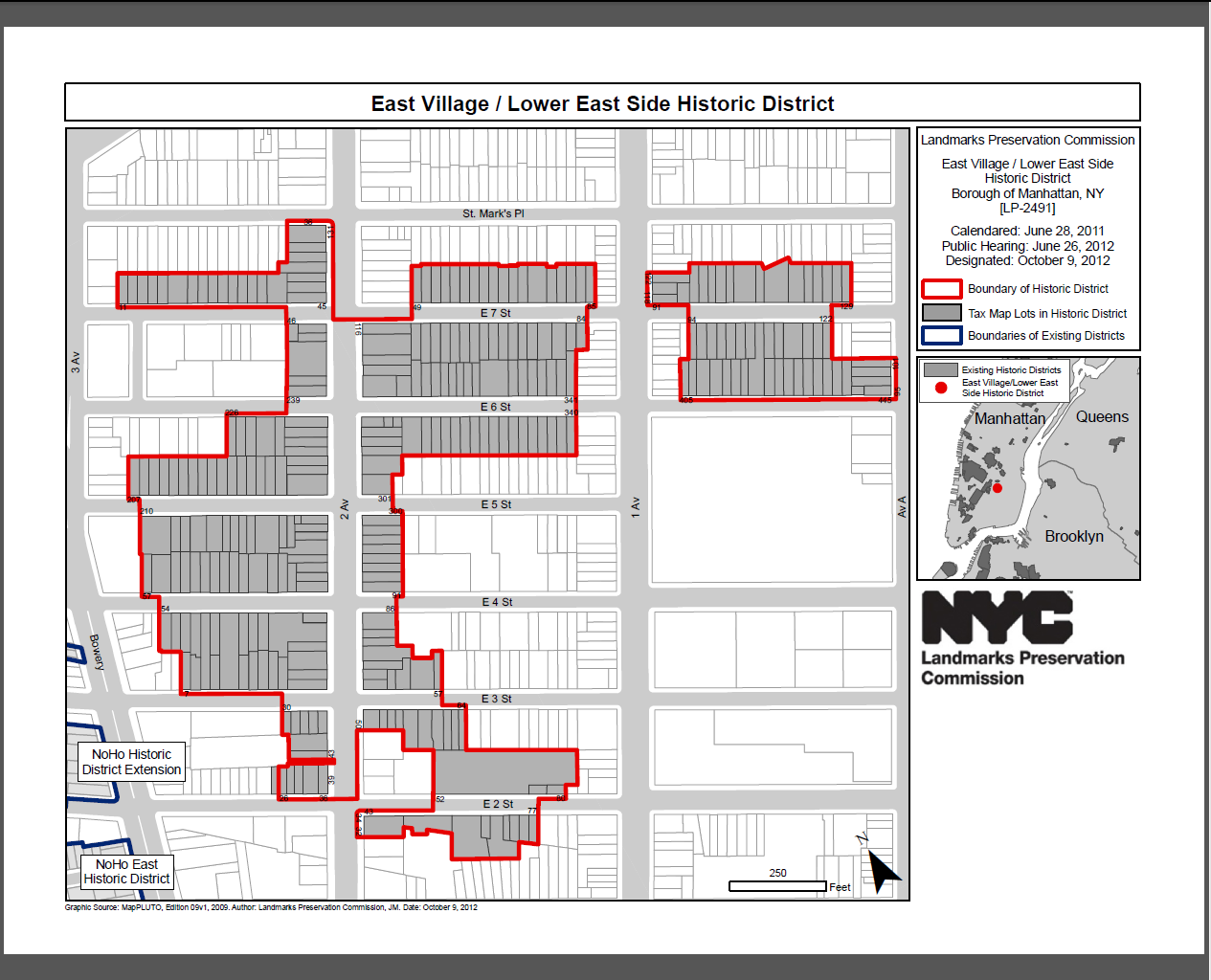 Tom Birchard, owner of Veselka restaurant weighed in on this accomplishment:

“The East Village means a lot to me. I first came here when I was a sophomore in college and I’ve never left. The energy and diversity of the neighborhood captivated me. I’ve raised five children here, and four of them still live and/or work in the neighborhood. I’ve had the pleasure of meeting some incredibly interesting people over the years.

I think the landmark designation not only helps preserve the architectural uniqueness of our community, but also helps preserve the cultural diversity and creative energy. Where else could a naïve kid from the suburbs meet and make friends with Ukrainians, Poles, Jews, Puerto Ricans, artists, writers, actors, designers, gays and lesbians without leaving his block? I feel incredibly blessed to have had the opportunity to spend my life here. I love the East Village. I look forward to helping preserve more of it.”

Fortunately, we were able to overcome REBNY’s opposition and preserve this special neighborhood.

It’s not just REBNY’s objections to landmark designations where we have had to take on and win against the lobbying juggernaut.  REBNY also supported the Mayor’s original citywide rezoning plan called ‘Zoning for Quality and Affordability’ (ZQA) that would have increased the allowable height of purely market-rate developments in contextual zoning districts across the city. 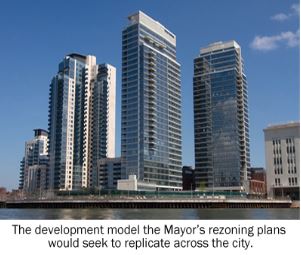 While we were not able to entirely stop this plan, we were able to roll it back considerably, eliminating some of the most odious and onerous elements which REBNY and others supported.  This included the height bonus for market-rate developments, which was entirely eliminated in our and other neighborhoods in Community Boards 1-8 of Manhattan, as well as some of the more ludicrous and unnecessary height bonuses offered to developments that include a relatively small amount of affordable housing (which already received a bulk/square footage bonus, which is what was necessary to incentivize the inclusion of the affordable housing, whereas the height bonus being offered was merely a gift to developers).

Although REBNY is a very powerful special interest group, this long track record shows their efforts can be overcome and communities and preservationists can win. Help us achieve more victories by sending a letter in support of one of our preservation campaigns here.  You can also help by donating to GVSHP here. 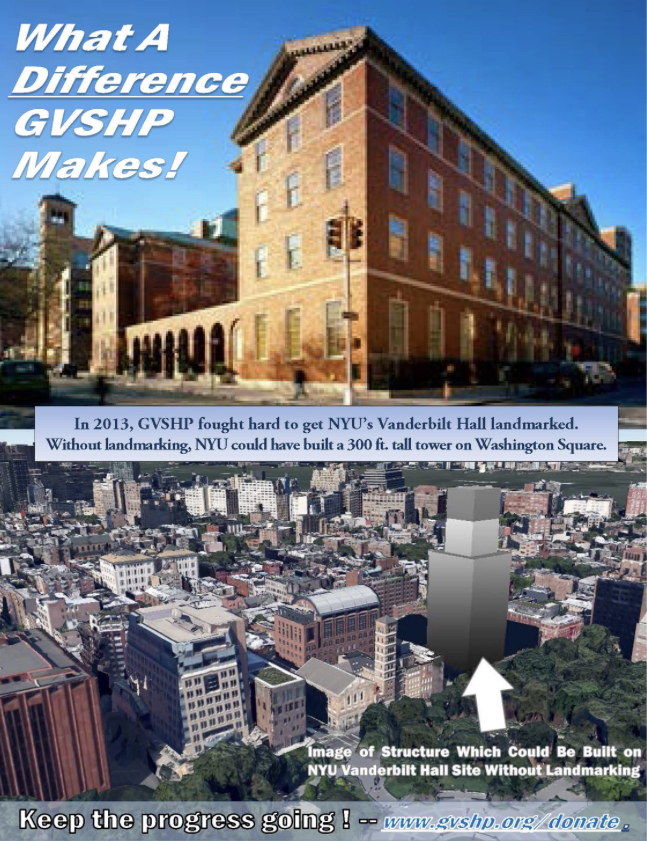