“What thoughts I have of you, tonight, Walt Whitman.” This opening line of Allen Ginsberg’s poem “A Supermarket in California,” draws meandering inspiration from one of New York’s most renowned meanderers, Walt Whitman, who was born on May 31, 1819. But the admiration of noted East Village poet Allen Ginsberg is only one of many connections Whitman had to Greenwich Village and the East Village, in spite of the much stronger association often made between him and Brooklyn.  Whitman spent a great deal of time here, found a home of sorts, and sang the songs of lower Manhattan and its residents in his varied career, influencing New York poets still today, as “a latter-day successor to Homer, Virgil, Dante, and Shakespeare.”

Walter Whitman  (1819-1892) was born in West Hills, Long Island. When Walt was four, the family moved to Brooklyn, where he lived for much of his life. At the age of twelve, Whitman began to learn the printer’s trade and fell in love with the written word. Largely self-taught, he read voraciously, becoming acquainted with the works of Homer, Dante, Shakespeare, and the Bible.

Whitman bounced around Brooklyn, Long Island, and Manhattan, first working as a clerk, then moving into the print world, serving as publisher, editor, pressman, and distributor. In one such publication, Life Illustrated, Whitman penned opinion pieces on current events – speaking out against slavery – and studies of his experiences in New York. He wrote of Broadway “in the full flow of its Gulf-stream of fashion, crush, handsome women, fops, celebrities, hubbub, countless and well-dressed nobodies. . . . and the hoarse and heavy roar of omnibuses.” He also wrote – timelessly – “In no other city in the whole world does rent occupy so large a proportion of expenses as in New York.”

In 1855, Whitman took out a copyright on the first edition of Leaves of Grass, which he self-published with twelve untitled poems and a preface. Fowler & Wells brought out the second edition in 1856, with thirty-three poems, a letter from Ralph Waldo Emerson praising the first edition, and a long open letter by Whitman in response. Henry Clapp, editor and founder of the literary magazine The Saturday Press, was one of Whitman’s only enthusiastic reviews. It was Henry Clapp who enticed Whitman to the Village bohemian hangout, Pfaff’s, located at 645 Broadway.

In Leaves of Grass, Whitman’s poems document his travels from his home in Brooklyn into Manhattan on the Fulton Ferry, where he would disembark and amble up to the Village. He would have meandered past a line of newly-built hotels and theaters of this new entertainment district on “upper Broadway,” going up as far as 14th Street. Whitman began frequenting Pfaff’s sometime during 1859, following a stint of editing The Brooklyn Times for about a year and a half. It had left him no time for writing poems, and he wanted to take some time off to write and make more literary connections. Pfaff’s was the spot.

In a July 11, 1866 interview in The Brooklyn Eagle, Whitman detailed his hobnobbing with the Village bohemians and Henry Clapp:

I used to go to Pfaff’s nearly every night. . . after taking a bath and finishing the work of the day. When it began to grow dark, Pfaff would politely invite everybody who happened to be sitting in the cave he had under the sidewalk to some other part of the restaurant. There was a long table extending the length of this cave; and as soon as the Bohemians put in an appearance, Henry Clapp would take a seat at the head of the table. I think there was as good talk around that table as took place anywhere in the world. Clapp was a very witty man.

Literary readings, critiques, and debates were a frequent occurrence that would last well into the night. Pfaff encouraged and assisted writers, and as a result, his reputation grew and Pfaff’s became a major New York City landmark.

Whitman biographer Jerome Loving wrote, “the discussion of Whitman’s sexual orientation will probably continue in spite of whatever evidence emerges.”It was at Pfaff’s that Whitman joined the “Fred Gray Association,” called “a loose confederation of young men who seemed anxious to explore new possibilities of male-male affection.” Whitman’s sexuality must be a part of any conversation about him – his poetry and writings are unabashedly sensual and sexually focused. It is documented that Whitman had relationships with men, including Peter Doyle (pictured above).

In a letter to the English poet and critic John Addington Symonds, Whitman claimed to have had six children. He wrote this in response to questions from Symonds’ about whether certain of his poems were overtly addressing love between men. This claim was never confirmed, and it’s unknown if Whitman had romantic relationships with women.

Whitman did, we know, have deep friendships with women. This included Ada Clare, who was known as “Queen of Bohemia,” and Adah Isaacs Menken, both of whom belonged to his inner clique at Pfaff’s. Both were fond of Whitman and supported his poetry. Ada Clare is quoted saying that “A Bohemian is not, like the creative of society, a victim of rules and customs. He steps over them all with an easy, graceful, joyous unconsciousness.”

The outbreak of the Civil War in 1861 broke up the bohemian crowd at Pfaff’s. Some of them joined the Army, or other national or local services to support the efforts. Whitman, who was 42 at the time, went to Washington to do volunteer work with the wounded in the hospitals. His notebook from this period bore the name of “Walt Whitman, Soldiers’ Missionary,” which indicates that Whitman saw himself as a healer with a higher mission. He lent an ear to the young men, giving them gifts, friendship, and kind words in addition to his nursing.

In 1870, Pfaff’s building was demolished, and Charles Pfaff moved his business uptown. Whitman returned to New York and loyally followed Pfaff’s to its new spot on 24th Street. Whitman wrote in “Specimen Days” many years later:

“An hour’s fresh stimulation, coming down ten miles of Manhattan Island by railroad and 8 o’clock stage. Then an excellent breakfast at Pfaff’s restaurant, 24th Street. Our host himself, an old friend of mine, quickly appear’d on the scene to welcome me and bring up the news, and, first opening a big fat bottle of the best wine in the cellar, talk about ante-bellum times, ’59 and ’60, and the jovial suppers at his Broadway place, near Bleecker Street.

Whitman also spent time in the East Village, where the 1920’ and ‘30s saw a “pansy craze.” Elaborate drag balls were held at Webster Hall. It was here where Whitman first read his “Calamus” poems to his Bohemian friends. These poems, which are now in Leaves of Grass, overtly and positively address Whitman’s sexuality – and homosexuality if they are read biographically. 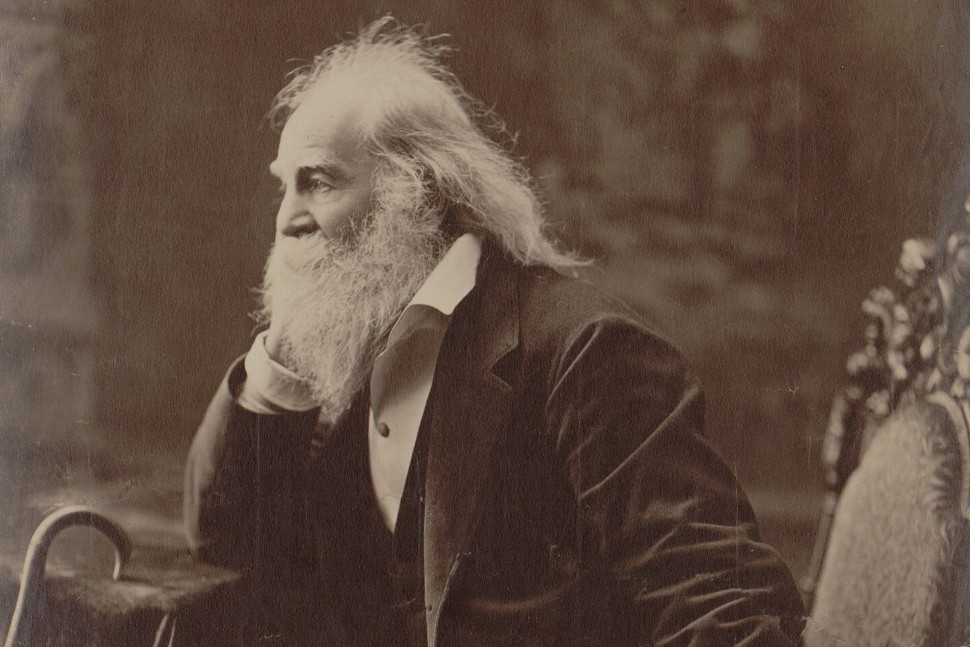 As Whitman grew older, he moved back to Washington D.C. to live with his brother. Eventually, he moved back north, settling in Camden, New Jersey, where the Walt Whitman House is now a museum. He suffered a stroke, and in 1892 died, leaving behind him countless writings and memories of a Village that still bears his mark.

Words from Whitman’s Song of Myself are now permanently a part of the Village: selections from the poem featured in GVSHP’s 2017 Regina Kellerman Award Winner the St. Vincent’s AIDS Memorial and Triangle Park. In “A Song of Myself” Whitman reveals himself as “Walt Whitman, an American, one of the roughs, a kosmos, disorderly, fleshly, and sensual.”

Thinking back to the time spent in Pfaff’s cellar on Broadway, Whitman wrote:

I can recall it all now, and, through a vista of cigar and pipe smoke and dim gaslight, see the scores of kindly faces peering at me, some in love; some in question, but all friendly enough; for, while ‘Bohemia’ might differ as to a man’s work or its results, she usually, once he was in, accepted the man, idiosyncrasies and all. ‘Bohemia’ comes but once in one’s life. Let’s treasure even its memory.

Sources (beyond those linked):