June is Pride Month, which makes it especially exciting time to be in the Village.  LGBT history is closely tied with the Village and environs, and throughout the course of this month we’re focusing on four areas of our neighborhood — the West Village, East Village, South Village, and NoHo — to highlight important locations, either long gone or still standing, that join the neighborhood narrative with this important history.  All of these sites can also be found on our Civil Rights and Social Justice Map, and we encourage everyone to check it out and let us know about other histories and locations to be added.  To kick off Pride Month we’ve rounded up a collection of posts that look at LGBT history in all “four corners” of our neighborhoods.  Though not exhaustive, we hope that this will give you some sense of just how large a role the Village has played in LGBT history and the LGBT rights movement. 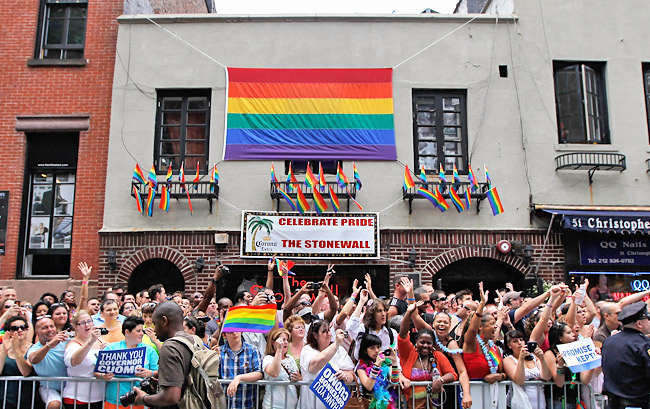 In the early morning of Saturday, June 28, 1969, dozens of gay men, lesbians, and transgendered people, many of them people of color, resisted a routine police raid on the Stonewall Inn. The riots that followed over the course of three days are widely considered to be the single most important event leading to the modern gay, lesbian, bisexual, and transgender (LGBT) rights movement in the United States. The Stonewall Inn was the very first site ever listed on the National Register of Historic Places for its connection to LGBT history in 1999; that application was co-sponsored by GVSHP.  GVSHP also got Stonewall landmarked by the City of New York in 2015, the first site ever designated based upon LGBT history, and was part of a broad coalition which got Stonewall named a U.S. National Monument, the first in the country dedicated to the LGBT rights movement, on June 24, 2016.

With its opening in 1979, the Pyramid Club was credited with defining the East Village drag and gay scenes of the 1980s and was known for its politically conscious drag performance art and as a hangout for the counter-culture of the neighborhood. The club was established by Bobby Bradley, Alan Mace, and Victor Sapienza.

The Pyramid Club hosted drag performers such as Lypsinka, Lady Bunny, and RuPaul. It was here that the annual Wigstock festival began in 1984, when a group of the club’s drag queens performed a spontaneous drag show Tompkins Square Park. In addition to performance art, cabaret, and dancing, many up-and-coming bands also performed here, such as Nirvana and the Red Hot Chili Peppers. The building itself is a wonderfully preserved pre-law tenement and is included in the East Village/Lower East Side Historic District, which was designated in 2012. The club, though a far cry from its former incarnation, still operates in the ground floor of the building.

Originally founded in San Francisco in 1955, the Daughters of Bilitis was the first lesbian organization in the United States. By 1957, New Yorkers were beginning to comment on the absence of a chapter in New York City. Lorraine Hansberry anonymously wrote a blurb in The Ladder (the organization’s newsletter, which had become the first nationally distributed lesbian publication in 1956) calling for a presence on the East Coast. The following year, Barbara Gittings and Marion Glass founded the New York chapter.

The initially tiny chapter shared an office with the gay male organization Mattachine and bounced around the city for the next 13 years. The chapter’s final location was in a loft at 141 Prince Street, in a building that is still standing, one block outside of Greenwich Village. By 1972, editing The Ladder ran out of funds and folded, however the 14 year run of Daughters of Bilitis inspired the creation of dozens more lesbian and feminist organizations across the country.

Harvey Milk High School (named for the first openly gay man to be elected to public office in the United States) was founded in 1985 to serve as the first public high school in the world for, though not limited to, gay, lesbian, bisexual, and transgender young people. The school was originally run by the Hetrick-Martin Institute (HMI), an organization that provides support to at-risk youth, especially non-heterosexuals. Since 2002, the school has been administered by the New York City Department of Education, separate from HMI, though they still share space in the same building. HMI also continues to provide the majority of the school’s arts and culture programming. The school moved here in 1993 from its original location on West Street.