Rattlestick Playwrights Theater, one of Greenwich Village’s most inventive and exciting producers of new works, is partnering with GVSHP, the NYC AIDS Memorial Board, St. John’s in the Village, and the Stonewall Chorale to present a new play by Villager Cusi Cram.  With dramaturgy by Villager Guy Lancaster, and starring (former Villager!) Kathleen Chalfant (Angels in America, Wit) and Lucas Steele (Natasha, Pierre and the Great Comet of 1812), the work is called St. Vincent’s Project: Novenas for a Lost Hospital. The play/public art piece is inspired by those who dedicated their lives to care and those who were lost. Guided by the character of Elizabeth Seton, founder of the order of the Sisters of Charity (played by Chalfant), the piece theatrically explores the 161-year history of the hospital. This piece uses theater and public art as a vehicle to remember, to honor, and to celebrate the life and impact of St. Vincent’s Hospital in our neighborhood, our city, and the world.

It is well known that the battle for the life of St. Vincent’s hospital was epic and at times like a development donnybrook. But today Off the Grid, we would like to highlight the some of the history of St. Vincent’s which we find profoundly interesting.

To begin, we must travel further back in time to illuminate the life of Saint Elizabeth Seton, whose story begins before the American Revolution. 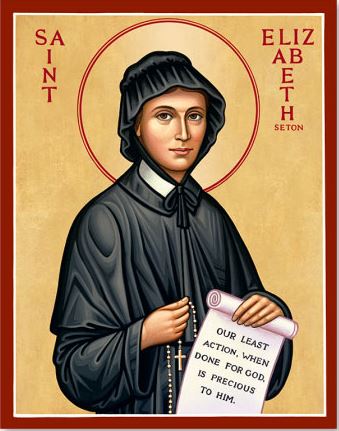 Elizabeth Ann Bayley was born in August of 1774 into a socially prominent family. Her father was a respected surgeon.  Married at the age of 19 to William Magee Seton, a wealthy businessman in the import trade, Elizabeth and William resided in a fashionable neighborhood on Wall Street. Originally an Episcopalian, Elizabeth was actively involved in social ministry, nursing the sick and dying among family, friends, and needy neighbors. Her husband William suffered from tuberculosis for most of their married life. His doctors sent the family to Italy for the warmer climate to cure his poor health, but he died shortly after their arrival. Elizabeth and their daughter Anna Maria were received in Italy by William’s Italian business partners, who introduced her to Roman Catholicism.  Her widowhood and her time in Italy living among those of the Roman Catholic faith were the turning point in the life of this ordinary woman, who would be canonized by Pope Paul VI in 1975.

Upon her return to New York, the widowed Seton was taken into the Catholic church. In order to support herself and her children, Elizabeth Seton started an academy for young ladies and, after living through many difficulties in New York, she accepted an invitation by a Catholic order in Emmitsburg, Maryland.   She moved there to establish Saint Joseph’s Academy and Free School, a school dedicated to the education of Catholic girls.

Elizabeth subsequently established a religious community of women in Emmitsburg dedicated to the care of the children of the poor. From that point on, she became known as “Mother Seton”. In 1810, the sisters adopted the rules written by St. Vincent de Paul for the Daughters of Charity in France. It had been Elizabeth’s original intention to join the Daughters of Charity of St. Vincent de Paul, but the embargo of France during to the Napoleonic Wars blocked the connection. Decades later, in 1850, the Emmitsburg community took the steps to merge with the Daughters, and to become their American branch, as their foundress had envisioned.

Which brings us to the foundation of St. Vincent’s Hospital in New York. The Sisters of Charity, Elizabeth Seton’s order of religious sisters, founded the hospital in 1849 in the midst of a cholera epidemic. Its first home was in a small rented house on East 13th Street, hardly more than a “poorhouse” with 30 beds. It moved to its West 11th Street location in 1856. It was the first Catholic hospital in Manhattan. Through the Civil War it provided care for veterans. In 1911 it treated many victims of the Triangle Shirtwaist Factory fire.  In 1912 it treated survivors of the Titanic who were taken there from the docks of the Hudson.  And in 1981, St. Vincent’s reported one of the nation’s first AIDS diagnoses.

In 1984, “the old building” was converted to an AIDS Ward, as the epidemic was on its way to reaching epic proportions. Spellman 7, as it was known, began with approximately 20 beds. Later, it expanded to the entire 7th floor of the building, Cronin.  St. Vincent’s became “ground zero” for the AIDS crisis.

St. Vincent’s Hospital served a wide range of New Yorkers in its neighborhood of Greenwich Village, including poets, writers, artists, homeless people, the poor, and the working class.  It turned no one away.  Its emphasis was on patient-focused healthcare, with a special mission to provide care for the poor and disenfranchised. Its guiding principles were:

Respect: The basic dignity of the human person is the guiding principle in all our interactions, policies and procedures.
Integrity: Integrity is the consistency between the Catholic identity we profess and the ways in which we act it is that quality of truthfulness, which fosters trust.
Compassion: Compassion is the way we share deep concern, love and care toward each person.

Excellence: Excellence is our way of demonstrating that we can always be more, always be better

In 2010, after talks with six different city hospitals about possible partnerships, St. Vincent’s filed for bankruptcy.  The causes were varied, and disputed; from cries of mismanagement to blaming the Catholic church for burdening the hospital with its growing legal crises. The battles to save the hospital and the buildings were valiant and epic.  But the countdown to its final breath happened in April of 2010:

• April 6: The board announced it would close the hospital.
• April 9: The ER stopped accepting ambulances.
• April 15: The last baby was delivered.
• April 19: More than 1,000 staff were laid off; a gay man with AIDS and longtime St. Vincent’s patient was turned away from the ER.
• April 30: the ER locked its doors, officially ending the hospital’s 161-year run.

While the HIV clinic, under the leadership of Dr. Tony Urbina, continues to operate under the auspices of the Center for Comprehensive Care at St. Luke’s Roosevelt Hospital, the loss of St. Vincent’s Hospital poses a deep problem for the neighborhood and the city itself.  There is no longer a single hospital in operation on the west side of Manhattan from the lower tip of the island to 59th Street.  The implications of the loss of an inpatient care facility are enormous.  Should a major crisis arise, will there be enough room in the east side hospitals for all those who require care?

You can read comprehensively about GVSHP’s efforts in relation to St. Vincent’s here.

2 responses to “St. Vincent’s Project: Novenas for a Lost Hospital”