The summer of 1978 in New York City has been well documented.  The city was a place of joy, grit, and transition, looking for the next big idea — or building — to move it forward.  That summer was also when the Supreme Court handed down its first-ever decision about our landmarks law. The Penn Central v. City of New York decision supported the city’s relatively new landmarks law, and saved Grand Central Terminal from the wrecking ball.  Coming just fifteen years after the demolition of Penn Station, it was a turning point for preservation in our city, and set an important precedent which GVSHP celebrates and works to build upon every day.

The story begins in 1968, when Penn Central, the owner of Grand Central Station, unveiled plans to build a tower on top of the landmarked historic terminal. The Marcel Breuer design would have used the existing building’s tower support structure but would have destroyed the facade and the Main Waiting Room. The plan was roundly rejected by the New York City Landmarks Preservation Commission (LPC) on August 26, 1969, which called the design ”nothing more than an aesthetic joke.”

The plans drew huge opposition, not just from the LPC, but most prominently from Jacqueline Kennedy Onassis, who had moved to New York City after her husband’s assassination. Onassis partnered with the Municipal Art Society to create the Committee to Save Grand Central Station. She sent then-Mayor Abe Beame a letter urging him to help preserve the station, in which she wrote:

Is it not cruel to let our city die by degrees, stripped of all her proud monuments, until there will be nothing left of all her history and beauty to inspire our children? If they are not inspired by the past of our city, where will they find the strength to fight for her future? Americans care about their past, but for short term gain they ignore it and tear down everything that matters. Maybe… this is the time to take a stand, to reverse the tide so that we won’t all end up in a uniform world of steel and glass boxes.

Six months before the Breuer plans were unveiled, however, the New York City Landmarks Preservation Commission designated Grand Central a city “landmark,” and so prevented Penn Central from carrying out its destructive mission. Penn Central sued the city immediately, and the New York State Supreme Court decided in favor of the railroad. State appellate courts disagreed, but the railroad pressed on to the Supreme Court.

Advocates of landmark preservation were eager to have the Supreme Court’s stamp of approval on the preservation movement. Given that New York City had allowed Penn Central the option of selling off the air rights above the terminal, the company’s claim that its financial hands were tied by landmark designation was not true. Penn Central could build something, just as long as it didn’t destroy the landmarked station as the Breuer plan would have.

On Tuesday, June 26th, 1978, the U.S. Supreme Court saved Grand Central Terminal from the wrecking ball. The decision from the Court upheld the constitutionality of New York City’s Landmarks Law. This was the first time that the Supreme Court ruled on a matter of historic preservation, holding that New York City’s Landmarks Preservation Act did not constitute a “taking” of Penn Central’s property and money-making ability under the Fifth Amendment, and that the Landmarks Preservation Act  was a reasonable use of government land-use regulatory power.

Justice William J. Brennan wrote the final decision from the court. Known for his outspoken progressive views, Brennan examined the history of New York City’s landmarks law and the saga of Grand Central Terminal in detail. Brennan firmly established his analysis as a model by which landmarks preservation cases ought to be treated.

“A principle emerged, subtly but firmly, from his words,” wrote New York Times critic Paul Goldberger. He summarized that principle: “a community has the right to declare that certain important pieces of private property have a public role to play, so long as it safeguards the rights of the owners of those properties. Private property rights are not absolute – but a community must show the real public benefit, as well as the inherent fairness, of a restriction like a landmark designation for that restriction to be legal. The real goal is to achieve a balance between the public good and the private right, a balance that may be different in each case.”

Penn Central might still be able to build some sort of building on top that could be approved, the Court wrote. To this day, though, the gorgeous Beaux-Arts station building stands unencumbered, welcoming more than 750,000 visitors and commuters every day. 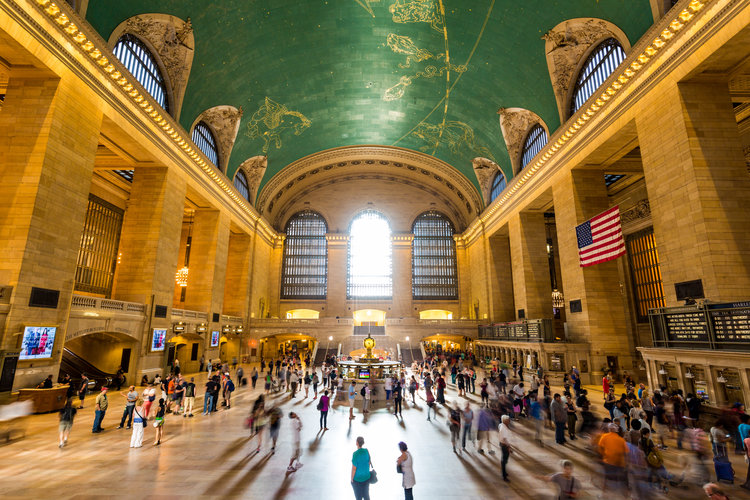