There were many moments to celebrate along the arc of fighting for the protection of the Gansevoort Historic District, also known as the Meatpacking District. One such milestone took place on July 17, 2002, when the New York State Office of Parks, Recreation, and Historic Preservation determined, in response to an application by GVSHP, that the Gansevoort Historic District qualified for the National Register of Historic Places.  This was the first new historic district in Greenwich Village to be determined eligible for the prestigious State and National Registers of Historic Places in decades; with this confirmation of the district’s historic and architectural significance, GVSHP and our allies went on to win landmark protections for the district just over a year later.

The Village was once a marshy area of sandy hills before Europeans arrived. What we now know as the Meatpacking District, or the Gansevoort Historic District, was named “Sapokanikan,” and served as a Native American trading station. The footpath that was used to get to the riverbank is now Gansevoort Street. This area, along with other parts of the Village, was the destination for European settlers of means who were escaping epidemics in the bustle of Lower Manhattan.

The Gansevoort Historic District is known for its irregular, cobblestoned streets. It’s also known for its rejection of the grid, which was created north and east of the neighborhood in 1811.

Around 1840, a great many row houses and townhouses were built in the Greek Revival style. A decade later, industry began moving into the neighborhood. In 1884, Gansevoort Market opened for business in the old freight yards, and the West Washington Market — ten brick buildings used for meat, poultry and dairy transactions — relocated to the river side of West Street.

By 1900, the Meatpacking District earned its name – the neighborhood became home to the city’s meat industry. In 1934, the New York Central Railroad opened the High Line, which was partially dismantled in 1962 and in the late 1980s, left vacant, and reopened in 2009 as the High Line park. During the meat industry’s peak in the neighborhood from the 1920’s through the 1980’s, residents of the Meatpacking District and the Far West Village experienced with all five of their senses what it was like, before the development of supermarkets (replacing the need for the trip to the butcher), frozen foods, and refrigerated trucks to deliver food to the city from afar.

Though meatpacking continued to be the neighborhood’s primary focus in the 1970s, new nightclubs opened in the area, especially for the LGBTQ folks who were spending their time out on the Christopher Street and Chelsea Piers. In the 1980s, sex clubs like The Anvil, The Manhole, the Mineshaft, the Hellfire Club, and others flourished.

As the meat industry cleared out and the clubs closed down – at least one bar was closed by the city at the height of the AIDS crisis – this small neighborhood between the Far West Village and Chelsea suddenly began to attract high-end boutiques. First to move in were Diane von Fürstenberg, Christian Louboutin, Alexander McQueen, Stella McCartney, Moschino, and a handful of others.

GVSHP was watching this progress in our area, and in 2001 we hired historian Thomas Mellins to write the first overall proposal for the Gansevoort Market Historic District. Which brings us to July 17, 2002, when the New York State Office of Parks, Recreation, and Historic Preservation determined that the Gansevoort Historic District qualified for the National Register of Historic Places. 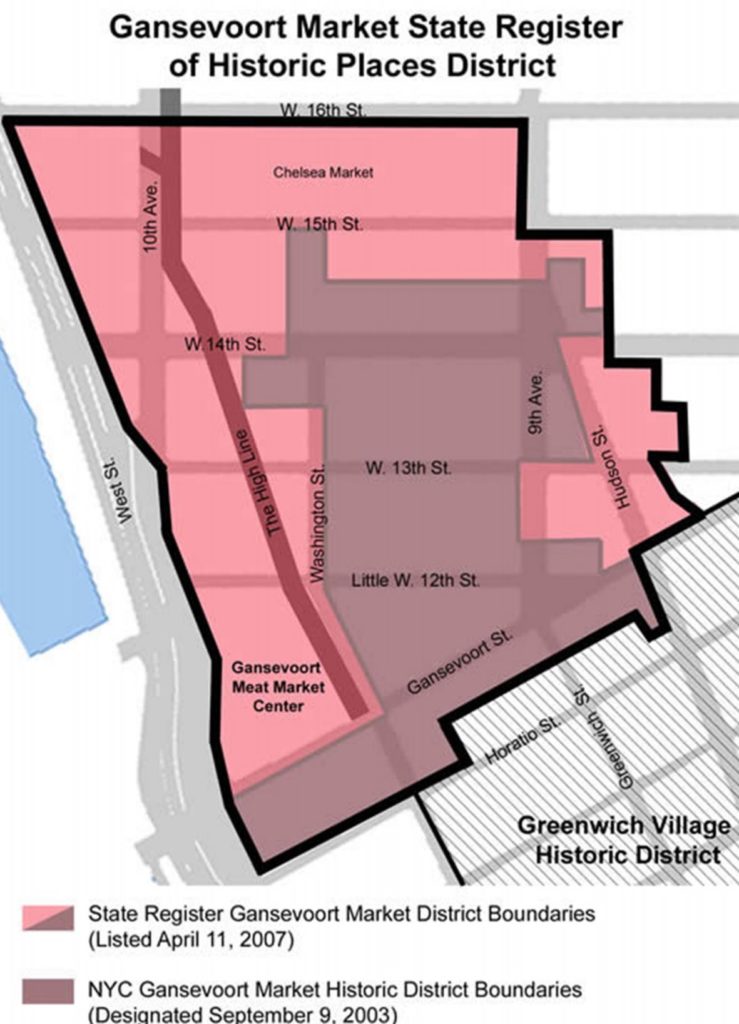 Following this determination, the NYS Parks, Recreation, and Preservation Department finally approved the district in May 2007, in response to a much more detailed application by GVSHP. The district added to the register encompassed the entire Meatpacking District, not just the city-designated Gansevoort Market Historic District.  Administered by the National Park Service, the National Register of Historic Places was created in 1966 as part of the National Historic Preservation Act. The National Register is the official federal list of historically significant districts, sites, and buildings in the country. National Register properties have significance to the history of their community, state, or the nation, and are eligible for certain types of tax incentives and breaks, and receive oversight regarding any actions taken by the State or Federal government which could impact their historic resources.

In 2003, out of two hundred fifty twentieth-century slaughterhouses and packing plants in the area, only about thirty-five remained in operation. On September 9, 2003, the NYC Landmarks Preservation Commission designated the Gansevoort Market Historic District, after three years of lobbying by GVSHP and our Save Gansevoort Market Task Force. The LPC granted only part of the request: the new district excluded the neighborhood’s waterfront and the 14-story Hotel Gansevoort, which opened in April 2004.