Our ever-expanding historic image archive has a number of fascinating collections which offer glimpses into our neighborhood and beyond throughout past decades.  Carol Teller’s Changing New York (Parts I, II & III), Jack Dowling Collection: Decay and Rebirth Along the Greenwich Village Waterfront in the 1970s, and Ruth E. Cushman Collection: NY Undergoing Change in the Early to Mid-20th Century are just a few of the collections which can cause you to get lost in history. But did you know we have mapped these photos as well? Its a wonderful search tool which can illustrate the changes to our area over time. 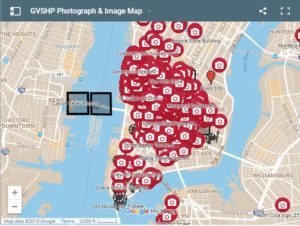 What is striking at first glance is the geographic diversity of our photos throughout our area and beyond. Zooming in you will find some thoroughfares have a real density of photos. For example, along Second Avenue between East Houston Street and St. Mark’s Place there are over 30 photos. They include everything from a man reading a newspaper while sitting on a couch in the middle of the sidewalk, to a Latino Church procession, to an old image of 84 Second Avenue, which is an 1841 Greek Revival row house which had a number of early 20th century changes.

Ever wonder what Colonnade Row on Lafayette Street looked like before that awful netting was put on the columns? Check this out:

We even have a picture of the interior of one of the former row houses of Colonnade Row:

Remember when there was more than one gas station in Greenwich Village? Take a look at these images of Joe’s Friendly Service Station:

Although we have mapped the vast majority of the photos in our collection, we still have some whose location is a mystery. Here are two; if you think you know their location, let us know, and we will map it!