This Friday, July 20, marks the 20th anniversary of the controversial auction of the former P.S. 64/CHARAS-El Bohio Community and Cultural Center at 605 East 9th Street by then-Mayor Giuliani over widespread community opposition.  Check out the Facebook event page here.

Last year at a Town Hall meeting, Mayor de Blasio noted this terrible mistake while campaigning for reelection.  At a Lower East Side Town Hall, the Mayor said publicly for the first time “for the Giuliani administration to put that building into private hands failed miserably, and we’ve seen the negative effect that has had on the community.  So I’m announcing tonight the city’s interest in re-acquiring that building.  We are ready to right the wrongs of the past.”  Singer followed that announcement by filing a lawsuit against the City, outgoing City Councilmember Rosie Mendez, incoming City Councilmember Carlina Rivera, the Greenwich Village Society for Historic Preservation, and its Executive Director, for allegedly conspiring to deprive him of his constitutional rights by denying him the ability to develop the site.

Go here to learn more about the long history of this property, our successful effort to help get it landmarked, the developer’s repeated efforts to install a fake dorm on site, and more. 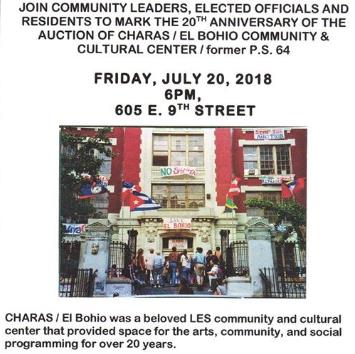 We will be rallying on the 20th anniversary of the sale of this landmarked community and cultural space and to call for the City to keep its promise and reacquire the building, and turn it back to a true community center. Here is a link to a flyer.

Local residents and elected officials, key organizers from CHARAS Inc, musicians and poets and more will be there.  Thursday, July 19 at the Museum of Reclaimed Urban Space there will be sign making for the rally —  learn more about that fun event here. 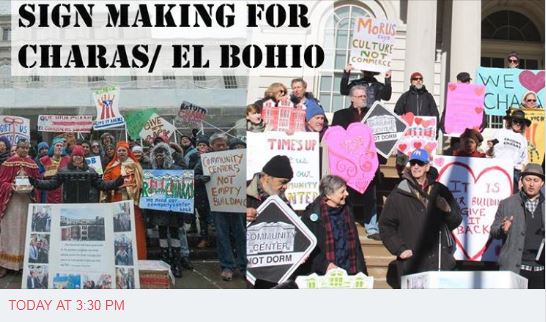