It’s August in New York.  It’s hot.  Need I say more? And conversations tend to revolve around the temperatures at this time of year.  How hot is it?  How humid is it?  When will the heat let up?  Is autumn around the corner yet?  We here at GVSHP decided that it was high time to get up and out of the office to do something about the dreadful heat.  So we embarked upon some very serious ice cream research.

What a chore!  But someone has to do it, right?  Well, what we found were frozen fantasies to please every palette in every corner of our neighborhoods.  Here are some of our “evidence based” findings! 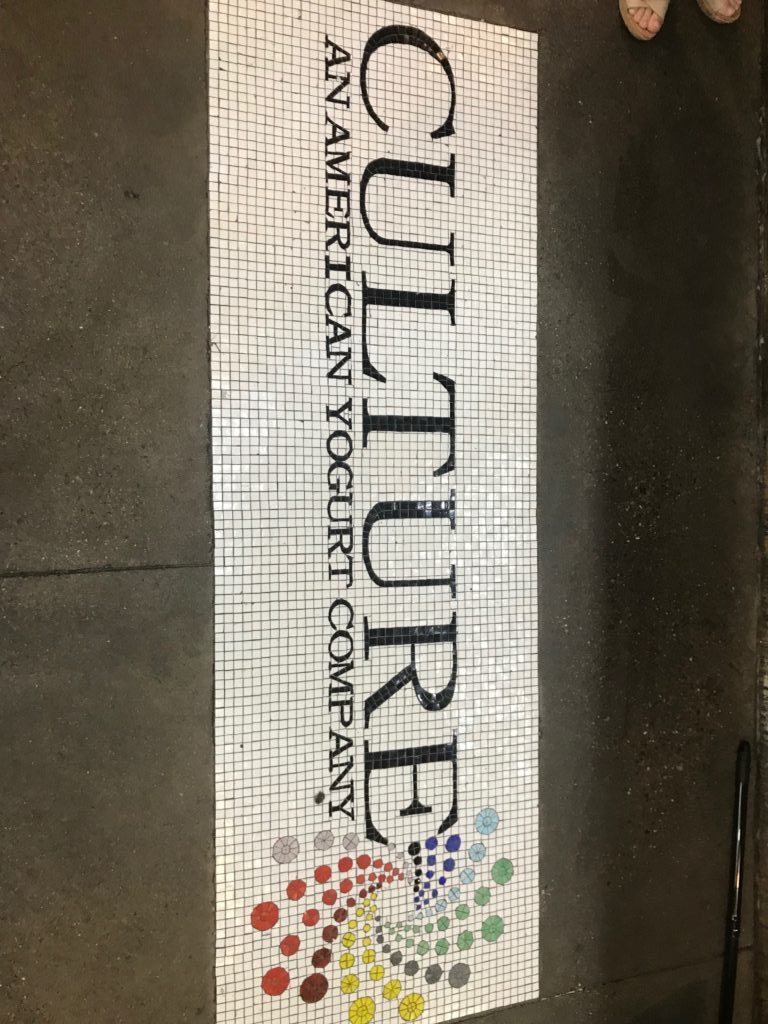 60 West 8th Street is definitely your destination if you want to sample some of the finest frozen yogurt this city has to offer!!!   What began as one shop in Park Slope, Brooklyn, Culture opened in the West Village in 2013.  Chef/Owner Jenny Ammirati was in the shop when we popped in today and she could not have been more gracious.  She told us that what she loves the most about being the owner of a store in the Village is really its residents.  She loves the constant flow of interesting customers and the loyalty of her legion of fans.  The store has grown in popularity by word of mouth and because Jenny serves up some scrumptious concoctions which has everyone talking. 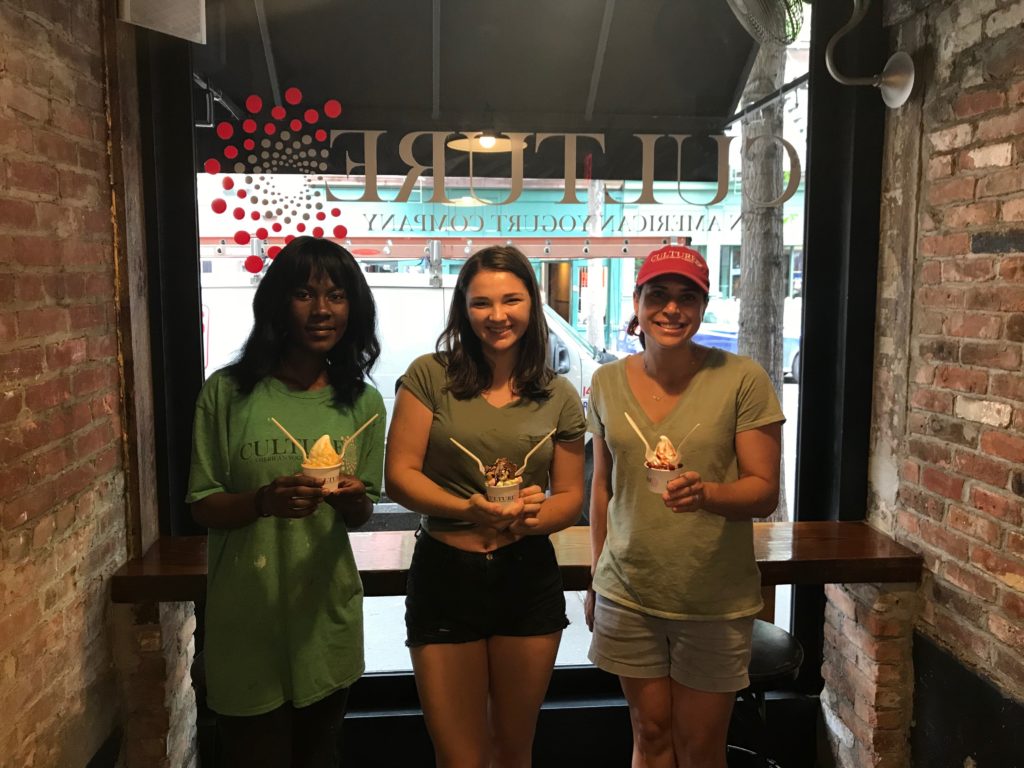 Jenny (on the right) and Naomi (on the left) served us three different dishes: Original flavor with strawberries macerated in aged balsamic vinegar, Key Lime flavor with crushed graham crackers and lime syrup, and ‘S’mores with chocolate flavored yogurt  with a hand made marshmallow/graham cracker/chocolate concoction perched on top.  Wow.  We were blown away!

Culture’s purpose is to provide a healthy snack alternative. They create both fresh and frozen yogurt in house and it is made from specially selected live probiotic cultures, local milk, and locally sourced ingredients. 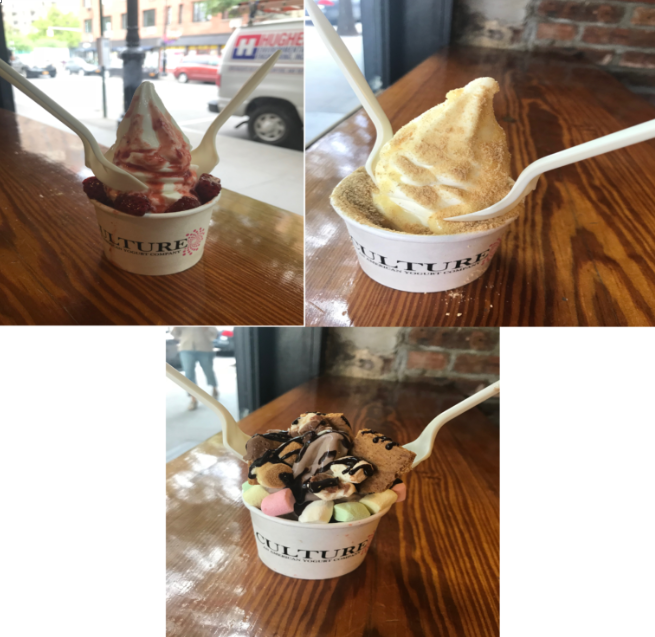 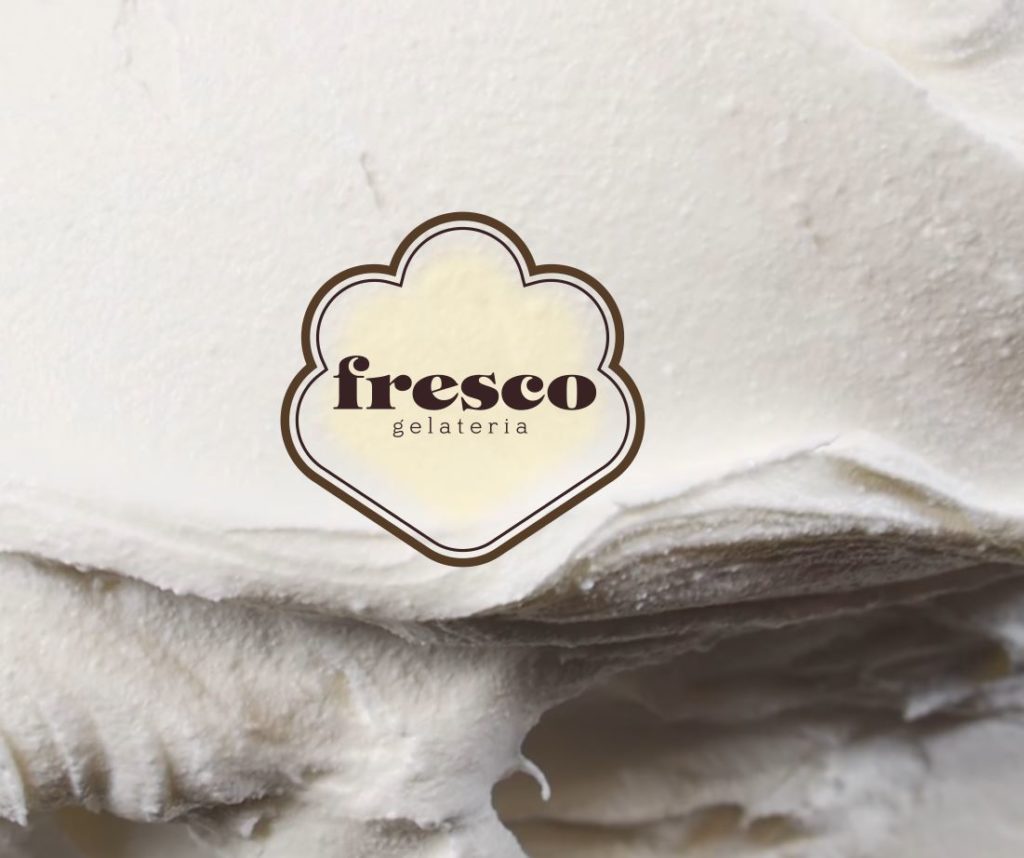 Fresco Gelateria in the East Village was awarded GVSHP’s coveted Business of the Month and we sure do know how to pick ’em!  Three Iliopoulos siblings, Anna, Ilias, and Vanessa own and run the popular Fresco Gelateria, at 138 Second Avenue between East 9th Street and St. Mark’s Place.  The row house whose ground floor Fresco occupies is an embodiment of local history. A Federal-style row house built in 1832-33 by Thomas E. Davis, a prolific developer, it was nominated for landmark designation by the city’s Landmarks Preservation Commission in 2009, a move that GVSHP enthusiastically supported. The façade’s Flemish-bond brickwork is original.   “It’s a great neighborhood, and really fits us,” says Ilias, who’s come to prize the rich local history and wishes more people knew about it. He and his two sisters happen to live in the neighborhood as well.

The East Village got just a little bit more civilized when Van Leeuwen Ice Cream moved in.  They do, after all, serve a delicious vegan ice cream in a variety of flavors.  They make all their  ice cream from scratch in New York City. The Classic scoops are crafted with fresh milk and cream, cane sugar, and egg yolks. The Vegan scoops are made with housemade cashew milk, organic coconut milk, organic extra virgin coconut oil, organic cane sugar, pure cocoa butter, and organic carob bean. We tried them both!  Gotta say, the Planet Earth vegan scoop is super interesting and a real taste treat.  They start with the cashew base and add spirulina to make the blue color.  Then they fold in green tea cake to give it the perfect blend of taste texture, and presentation. The East Village location is at 48 East 7th Street.

And the salted caramel Classic scoop?   Yeah.  Yummy as it sounds 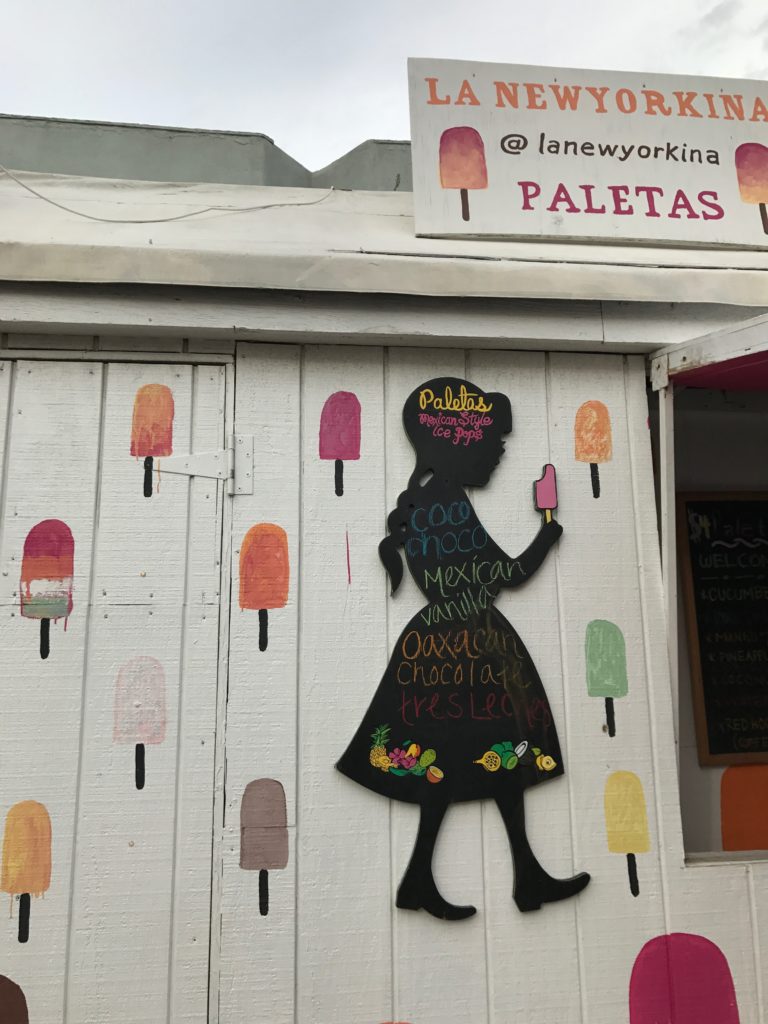 La Newyorkina in the Sullivan Thompson Historic District (and a bright pink outpost in Astor Place) is the brainchild of renowned chef, Fany Gerson, a New Yorker who immigrated here from Mexico.  After a long trip home to her native Mexico to write her first book “My Sweet Mexico,” she returned to New York wanting to share and celebrate the amazing frozen treats & sweets of Mexico. Without an exact idea of the kind of shop she wanted to have she decided to start small and see what happened. One morning, she woke up and knew what it was going to be; it would be an ice cream shop! With the help of  friends she began her journey making paletas and selling them at the Hester street fair in the summer 2010. The idea was to start with the Mexican Ice pops because they represent the ubiquitous frozen treat in Mexico. Every little town has at least one paletería  and to Mexicans, paletas are like gelatos to Italians; a delicious and integral part of the culture. 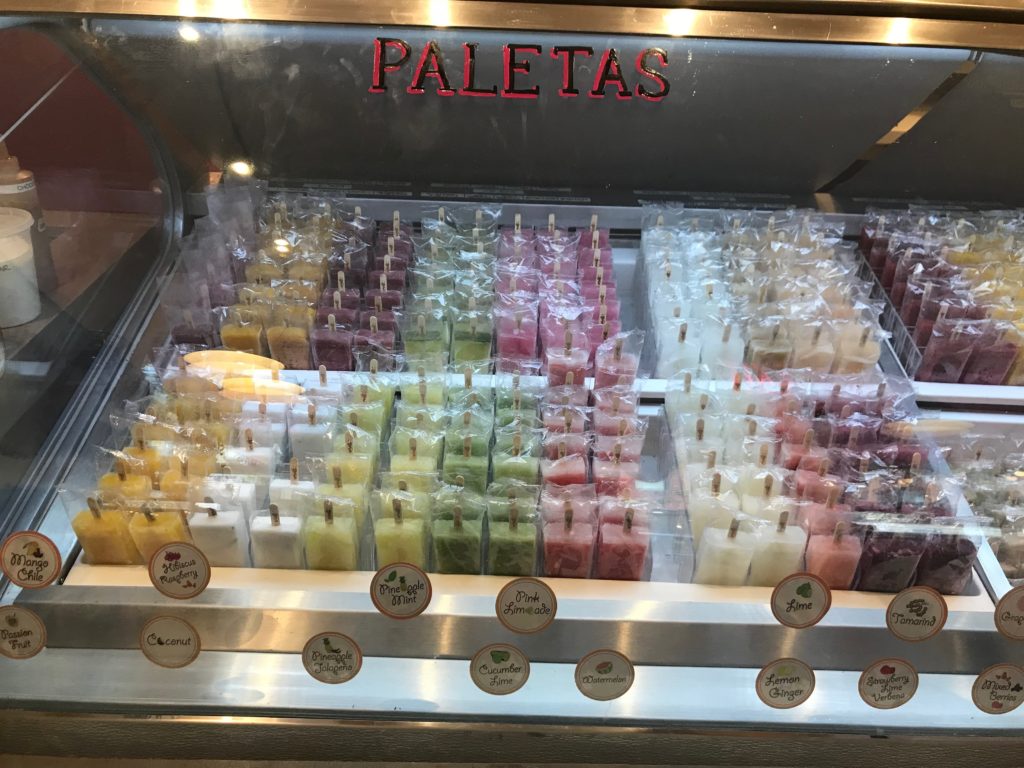 Since then, Gerson has grown to serve up a terrific variety of treats, from the famous Paletas (62 flavors and counting!  40 of which are vegan), to ice cream, to breads and all sorts of cookies.  One of the most interesting things La Newyorkina serves is a Chamoyada.  Chamoyada are made with different fruit “ices”, pickled plum sauce called chamoy, salted chile and a tamarind candy straw. Its fruity, spicy, salty and a bit tangy all in one!!!

The La Newyorkina shop is at 240 Sullivan Street.  But you can find the frozen treats in Astor Place and on the Highline!

Our research had to come to a close for the day because we could not possibly sample another scoop.  We highly recommend that you go out to do some research for yourselves!  Don’t be shy.  August is almost over! 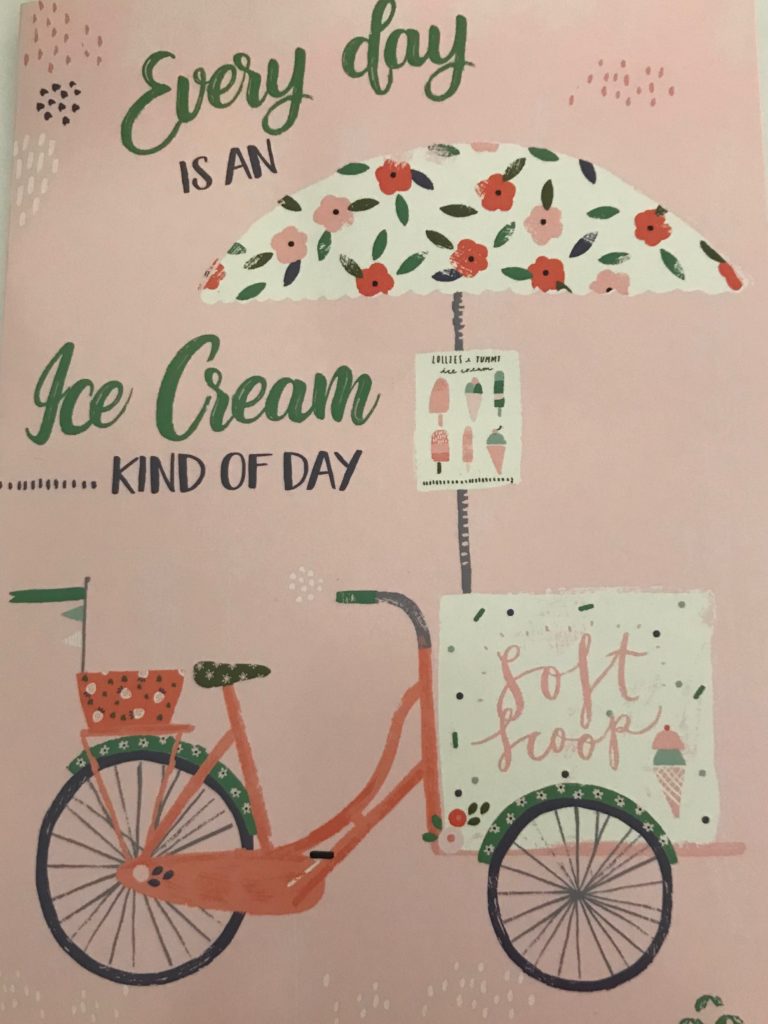