On August 24, 2016, the New York City Planning Commission held a hearing to consider a zoning change and transfer of air rights for the development of the three-block long St. John’s Terminal site at West and Houston Streets. GVSHP testified along with political officials, neighbors and other organizations at the hearing demanding a series of neighborhood protections and mitigations as part of the deal, including an agreement with the City for landmarking, restrictions on the transfer of Hudson River Park air rights, and an elimination of all planned big box and destination retail stores from the proposed development. Through the efforts of our Councilmember Corey Johnson (now City Council Speaker), we were able to secure those measures, some of which had been opposed by Mayors for over a decade, and these provided inoculation against future over-development possibilities that would pay dividends for decades to come.

However, recently south of Union Square in the Central and East Village, such protections were not secured as promised by the local Councilmember as part of the recently-approved Tech Hub rezoning on East 14th Street. Here are how those two stories stack up.

The Mayor, the Hudson River Park Trust, and a developer came up with a plan to rezone the three-block St. John’s Terminal site straddling Houston Street between Washington and West Streets.  The Mayor and the Trust also came up with a plan to allow the transfer of “air rights” from the Hudson River Park to sites one block inland from the water, including the St. John’s site, which would increase the size of allowable development there in exchange for funds for the park.  Details on the proposal and requested approvals are here.

These plans would have had a huge impact upon the entire Hudson River waterfront – the park and adjacent neighborhoods – as well as nearby residential neighborhoods like the South and West Village.  At first, the administration adamantly refused any of the sensible mitigations we proposed for the surrounding neighborhood.  However, the Pier 40/St John’s rezoning required the approval of the City Council.  The Council almost always defers to the local City Councilmember on local land use issues, and thus we were able to convince our Councilmember in that area, Corey Johnson, to make it clear to the Mayor that the only way he would get approval for this rezoning is if these far-reaching and desperately needed protections and mitigations were also included.

It took thousands of residents attending meetings and writing letters and emails, a supportive Community Board 2, and the leadership of City Councilmember Corey Johnson to stand up to the Mayor and be successful.  Through it we were able to make it so that some of the development was residential, and thus less impactful than the entirely commercial development which the existing zoning would have allowed; long overdue landmark protections were granted for the remaining section of our proposed South Village Historic District with the designation of the Sullivan-Thompson Historic District; the entire Greenwich Village waterfront was protected from any future air rights transfers from the Hudson River Park, and any future air rights transfers from the park even outside of Greenwich Village, were limited; traffic-generating big box stores and “destination retail” were banned from the development.

The story in the East Village with the Tech Hub has many parallels to the one at Pier 40/St. John’s, but, unfortunately, with a different outcome. The Mayor proposed a huge “Tech Hub” on East 14th Street east of 4th Avenue where a former PC Richards store currently stands.  The Tech Hub, which is to provide start up space and tech job training, could have been built within the existing zoning. However, the proposed project is much larger than the zoning allows, in order to allow 8-10 floors of additional for-profit commercial space, which would make up about 40% of the development.

Like with the Pier 40/St. John’s project, the Mayor needed approval for the commercial upzoning from the City Council. And like that proposal, we knew the Council would defer to the local City Councilmember, Carlina Rivera, who promised during her campaign for City Council last year that she would vote no to the upzoning for the Tech Hub unless neighborhood protections against encroaching oversized and out of place development in the surrounding area we were fighting for were included. However when it came time for the vote, the Councilmember voted yes to the upzoning for the Tech Hub, with only promises of very minor measures which will have little to no effect in protecting our area.

Instead of a historic district we were seeking in this area, south of Union Square along University Place, Broadway, and 3rd and 4th Avenues, of roughly the same size as the Sullivan-Thompson Historic District we won in 2016 as part of the St. John’s/Pier 40 deal, we got a commitment to consider (not landmark) seven buildings for landmark designation, or 3.6% of the number we sought (most if not all of which appear to have been cherry-picked as sites where development never could take place anyway, thus making landmarking almost irrelevant).  As for zoning protections, unlike the comprehensive waterfront zoning protections included in the deal in 2016, Councilmember Rivera got a commitment by the City to consider, many months down the road, implementing a requirement for special permits for new hotels in a part of the affected area, which would make hotels not impossible, but possibly less likely to be built.  This single measure, which would still give developers several months lead time to file for hotel construction without the new requirement, and still allow them to get the special permits to build the hotels at the discretion of the City Council, would do nothing about condo or office tower high-rises proliferating in the area, or about affordable housing, and would not even apply in any meanindgful way to the University Place corridor and blocks directly east, as the zoning protections we were fighting for would have.  Read more here or see chart below. 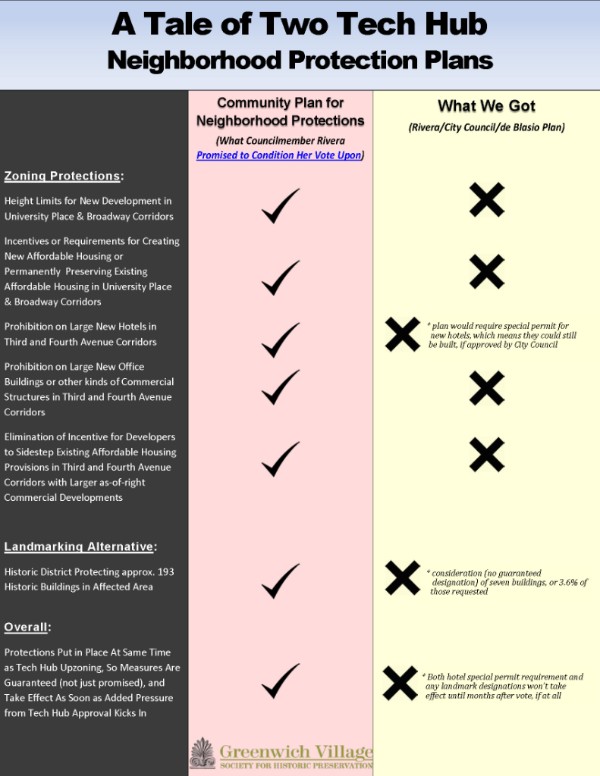