On October 17, 2017 the Landmarks Preservation Commissions (LPC) held a hearing to consider landmarking 827-831 Broadway, the threatened 1866 lofts once home to Willem de Kooning. Just two weeks later, the LPC voted to landmark them, culminating a year and a half campaign by GVSHP and our allies to save them from the wrecking ball and replacement with a 300-foot tall glass office tower. 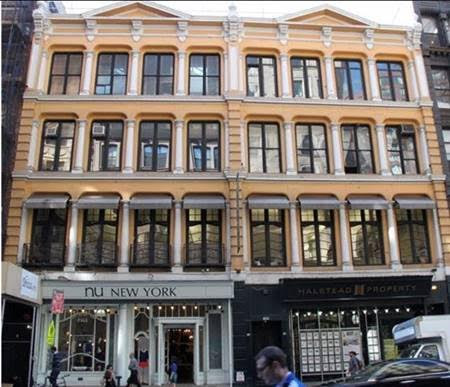 These 1866 lofts were once home to Willem de Kooning and a vast array of influential art world figures, and were connected to critical figures in early American industry and commerce. When GVSHP discovered plans to demolish these buildings in early 2016, we began a campaign to save them, unearthing historic documentation of their significance which became the basis for their designation, lining up support for preservation among government officials and art world figures, placing an op-ed in the New York Times with Eric Rayman calling for the buildings to be saved, and generating thousands of letters to Mayor de Blasio and the LPC in support of designation. The LPC initially rejected GVSHP’s plea for landmark designation, but later relented and calendared the buildings for designation, over opposition from the developer/owner. Read the full history of the buildings, and GVSHP’s landmarking proposal, here.

In addition to the thousands of people who wrote letters and testified at hearings in support of landmarking these buildings, elected officials, other preservation groups, and art world figures came out in support of preserving these buildings, including then-Councilmember Rosie Mendez, who personally testified in favor at the LPC hearing. Your support always makes a difference!

But the battle didn’t end there.

The developer then proposed a totally out of context crinkly glass box to sit on top. 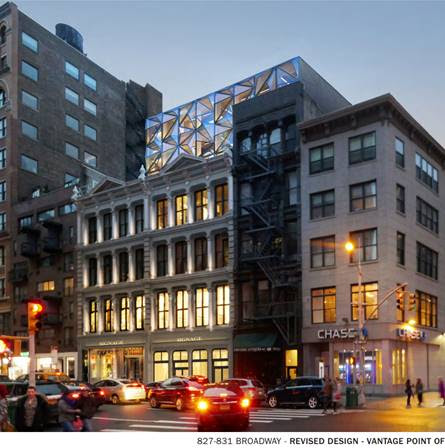 After two rejections by the Landmarks Preservation Commission (LPC), a proposal to build additions kept returning to the Commission.  The good news: the size of the proposed addition to 827-831 Broadway was substantially reduced, minimizing its visibility (the basis upon which the LPC must judge its ‘appropriateness’).  The bad news: the developer is now moving forward with a jarringly visible 7-story addition to the connected property at 47 E. 12th Street, which GVSHP had proposed for inclusion in the landmark designation (the three properties are of the same design and were all built in conjunction) but which the LPC refused to include (full application here).

Though we had an incredibly important victory at 827-831 Broadway,  we still need to get the Mayor and city to support zoning and landmark protections for the surrounding area, which faces a flood of overdevelopment like what was planned at 827-831 Broadway.  This hyper-development pressure is only getting worse with the recent City Council approval of the Mayor’s Tech Hub on 14th Street.

The fight is not over, you can click HERE to send an email to the LPC and tell them to give historic district protections to the area south of Union Square.