John “Jack” Silas Reed was an American journalist, poet and communist activist at the beginning of the 20th century whose writing about revolutionary events and radical causes made him a very polarizing figure in this country and abroad. He is probably best known as the author of Ten Days That Shook the World, his account of the Bolshevik Revolution which he reportedly wrote from his home at 1 Patchin Place.

Reed was born on October 22, 1887 to a wealthy family in Portland, Oregon. After graduating from Harvard University in 1910 where he was the editor of the University’s monthly magazine, he took on a number of journalism assignments and moved to bohemian Greenwich Village to be among other writers, intellectuals and artists. His first home here was at 42 Washington Square and from there he explored the surrounding eclectic community of artists, immigrants and political and social activists. Based on this experience, he wrote his poem ‘The Day in Bohemia” in 1912. Here is an excerpt:

Twixt Broadway and Sixth Avenue,
And West perhaps a block or two,–
From Third Street up, and Ninth Street down,
Between Fifth Avenue and the Town,–
Policeman walk as free as air,
With nothing on their minds but hair,
And life is very, very fair
In Washington Square.

Bohemia! Where dwell the Sacred Nine,
Who landed, steerage from the White Star Line,–
(For, when the Sacred Springs dried up in Italy
They packed their duds and emigrated prettily.
And all the Ladies, donning virile jeans,
Became the Editors of Magazines.)

Among his circle were such notorious figures as Mabel Dodge, Max Eastman, Margaret Sanger, Frances Perkins, Emma Goldman and Alexander Berkman. His involvement in activism started with his (as well as other Villagers’) role in advocating for striking silk workers in Patterson, New Jersey in 1913.  In 1914 Reed was sent to cover the Mexican Revolution; for four months, he traveled alongside Pancho Villa and his guerilla peasants, sending reports back home which contradicted the prevailing American reports which portrayed the Mexican revolutionary as a villian.

Max Eastman’s Marxist magazine The Masses sent Reed to Russia during that country’s Bolshevik Revolution. He arrived in Petrograd in October of 1917 with his wife Louise Bryant, also a journalist, as the Bolsheviks seized power. Reed was a supporter of the new socialist government that took over Russia and he wrote extensive notes chronicling the revolution which became the basis of his book Ten Days that Shook the World. Bryant also wrote a book based on her experience in Russia, Six Red Months in Russia. 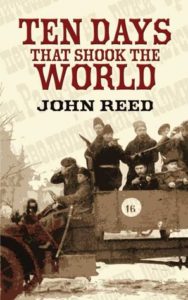 By 1919 Reed, along with activist Benjamin Gitlow, led a portion of the Socialist Party’s left wing to form the Communist Labor Party, one of the two early communist organizations in this nation which would lead to the founding of the Communist Party of the USA. He also served as a contributing editor of its initial journal, The Revolutionary Age and then became editor of The Communist (today, known as Political Affairs).

On another trip to Russia where he was received as a hero, he developed typhus and died at the age of 33 in 1920. He is one of three Americans buried at the Kremlin Wall Necropolis.