On Monday, October 29, 2012, Hurricane Sandy a.k.a. “Superstorm Sandy” made landfall in New York. It was one of the most devastating natural disasters to ever hit New York. It inflicted $19 billion in damages and killed 43 people in New York City. Many neighborhoods in Manhattan, Brooklyn, Staten Island, and Queens were flooded by the 14-foot storm surge, which was compounded by the timing of the high tide following a new moon. While Lower Manhattan was flooded extensively and left without power for several days, and billions of dollars worth of buildings and personal property were damaged, many in the outer boroughs would never return to their homes. Over 100 homes in Breezy Point burned to the ground and 600 families in low lying areas of Staten Island took buyouts for their properties from New York State. It was more cost effective for the state to purchase these homes and return the land to nature than build them back and risk flooding and destruction in a future storm. 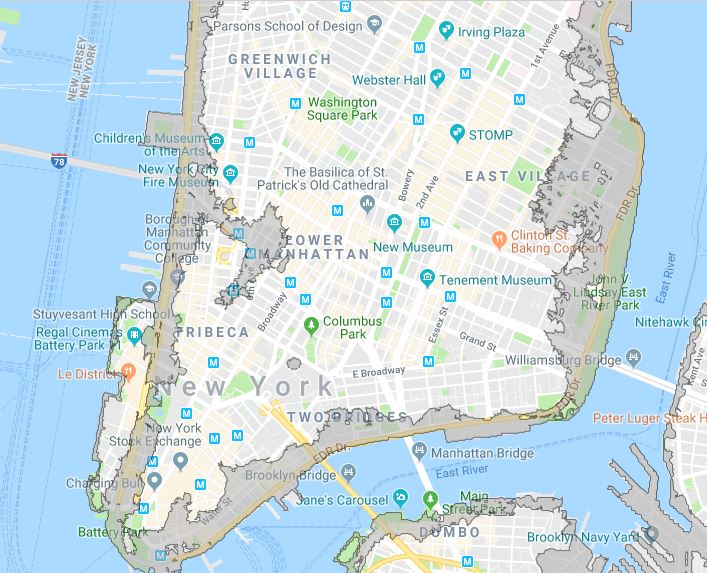 The East Village was built on what used to be low lying marshland. During Sandy, this area flooded almost all the way from the East River to Avenue B. In the map below on the left from 1766, you can see the area that would become today’s East Village and Alphabet City was then known as the “salt meadows”. The map on the right side from 1797 shows that streets had been mapped out up to North Street (which would later become Houston Street), but the area is crisscrossed by several streams.

Following the extensive East Village flooding during Sandy, buyouts for this built up and highly valuable real estate were never considered. The City, State, and Federal Government embarked on extensive resiliency studies. While a lot of planning has taken place, not much actual work to protect this area from potential flood damage has occurred. If another Sandy hit tomorrow, the east side neighborhoods would likely face the same levels of flooding. The only differences would be seen in newly constructed or substantially improved buildings. Unfortunately, Alphabet City’s housing stock is comprised mostly of 19th and early 20th century tenements and large public housing developments, constructed many decades before the City first implemented flood resistant construction standards in 1983. These types of buildings face significant physical and financial challenges in upgrading to current flood resiliency standards and it is extremely unlikely that many or most of them will ever be retrofitted to meet these standards.

The City’s planned flood protection plan for the neighborhood was recently revised. Instead of a series of walls and berms along the river, the new plan will close East River Park for three years in order to raise large sections of the park by ten feet. Costing $1.45 billion, construction is set to start in March 2019, with a completion date of 2023.

Although the flooding did not come as far inland on the west side as it did on the east side, and fewer residential units were affected, many buildings were seriously damaged. Flood waters reached most of the way back to the original shoreline of Greenwich Street. Several of the West Village Houses buildings were flooded and damaged extensively. A three-story building at 401 West Street was further damaged during Sandy and later demolished.

Westbeth Artists Housing was severely damaged during Sandy. Many of the artists lost their life’s work worth millions of dollars when the basement storage units were flooded. The Martha Graham Dance Company alone lost $4 million worth of costumes, sets, and other supplies. Actor Vin Deisel, who grew up in Westbeth, donated two weeks of hot lunches for Westbeth’s seniors following Sandy. Westbeth is now undergoing a $40 million retrofit of the building. This project will raise boilers and other mechanicals above grade, waterproof flood prone windows, and install high capacity pumps.

I live downtown just two blocks from the East River but just out of the flood zone. I was only mildly inconvenienced by having to walk up 15 flights for a few days with no power. Manhattan residents above 14th Street were barely affected and it was easy for many to forget about the extensive damage our neighbors faced just blocks away. Traveling just a few miles from Manhattan to the Rockaways or Howard Beach to help friends and family recover was like traveling to a different universe. Mayor Bloomberg insisted the NYC Marathon take place days after Sandy while fires still raged and flood waters had barely receded (fortunately he changed his mind and canceled it).

I would like to end this on a happy note and say we are way more prepared than we were in 2012. Unfortunately, that’s not the case. A Sandy-sized storm is unlikely to hit again now, but if it did we would probably see the same extent of damage or greater, as the City’s population has grown by about 400,000 people since 2012. The subway would likely not flood as badly as it did in 2012, and the 14th Street Con Ed plant and many other buildings have been upgraded, but many of the resiliency programs have yet to be implemented and are hindered by expanding timelines and budgets.

One response to “Remembering Hurricane Sandy”