My favorite series in the past MANY years is The Marvelous Mrs. Maisel written by the amazing Amy Sherman-Palladino.  Not only is her rapid-fire dialogue and direction a joy to watch and listen to, but the actors who have been cast in the show are sublimely well-suited for their roles.  Then, of course, there are the FABULOUS locations, many of which are right here in our very own ‘hoods!

Rachel Brosnahan  plays Miriam “Midge” Maisel, a 1950s Jewish housewife who thinks she has it all: the perfect husband, the perfect children, and the perfect, enormous Upper West Side apartment. Then, without warning, her world is turned upside down when her husband announces he’s leaving her. Fueled by feminist rage, pitch-perfect timing, and the patter that is the  trademark of Sherman-Palladino, Midge realizes she’s got skills as a stand-up comic.  She travels down to the Village almost nightly to test the waters and hone her act.

Here is a line-up of the lovely locations. 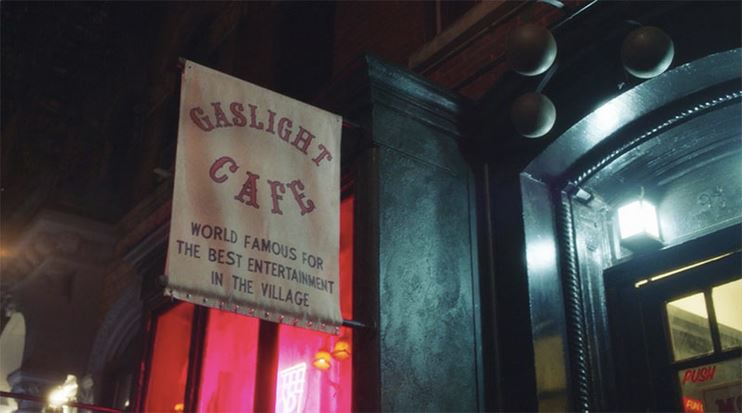 The Gaslight Cafe was a real location – a coffeehouse and music venue that hosted the likes of Bob Dylan, beat poets like Allen Ginsberg, Jimi Hendrix, and many more. It was located at 116 Macdougal Street in Greenwich Village between 1958 and 1971. The famous venue has been shown in Mad Men and Inside Llewyn Davis. 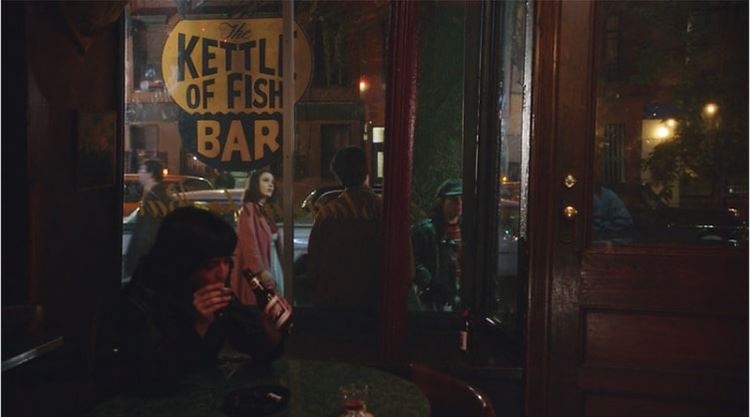 The original Kettle of Fish Bar was located next door to the Gaslight Cafe. Bob Dylan hung out here along with other musicians between sets at the Gaslight Cafe. Gaslight employee Susie Myerson (played by Alex Borstein) takes Midge to this bar after she bails her out of jail.  The Kettle of Fish still exists but has moved locations several times. It is currently located at 59 Christopher Street. 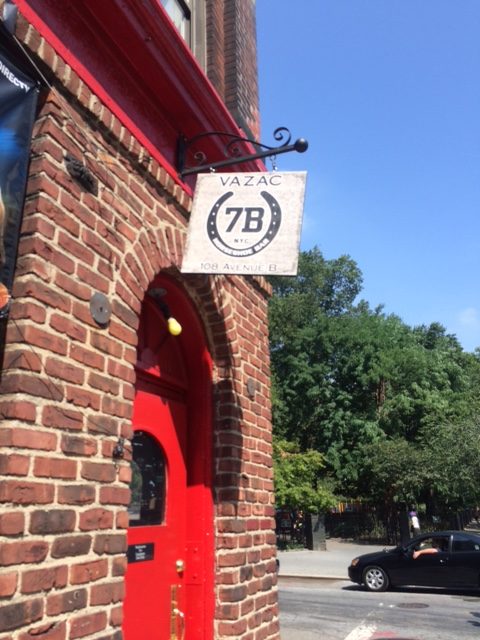 After a particularly successful set one night, Midge realizes that she, indeed, has some comedic chops.  She is seen heading into a subway entrance behind the bar where she just played.  The location shot they used is 7B, one of your humble writer’s favorite boits….  It’s also known as the Horseshoe Bar and is located in Alphabet City at the corner of, yes, 7th Street and Avenue B. The location has also been seen in Jessica Jones. The subway station entrance doesn’t really exist here, though.

Midge then gets on a vintage subway car, likely one that is on display at the New York Transit Museum in downtown Brooklyn; not our neighborhood, but a subway runs through it! 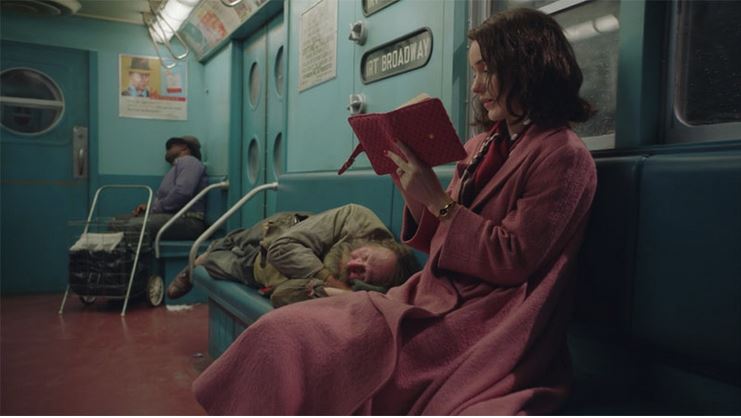 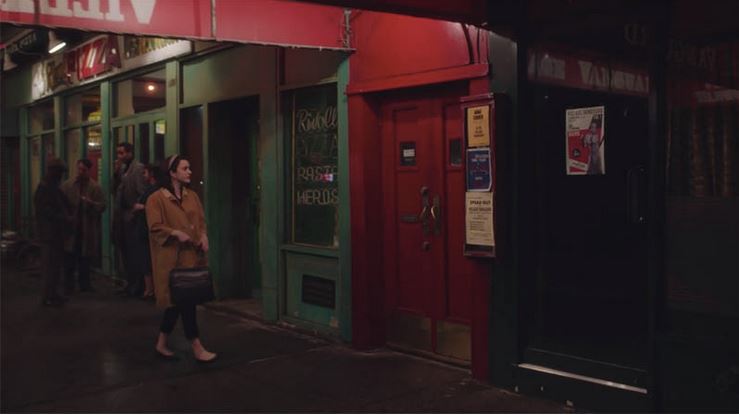 Midge goes to see Lenny Bruce open for a jazz band at the Village Vanguard, a venue founded in 1934 and located at 178 7th Avenue South since 1935. Originally known primarily for folk music, poetry readings, and stand-up comedy, the Village Vanguard began to focus on jazz starting in 1957. 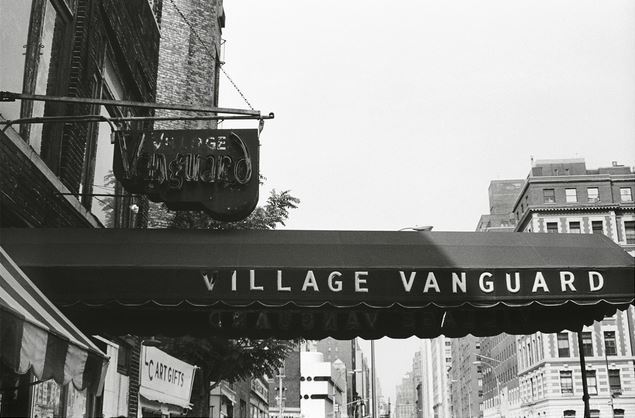 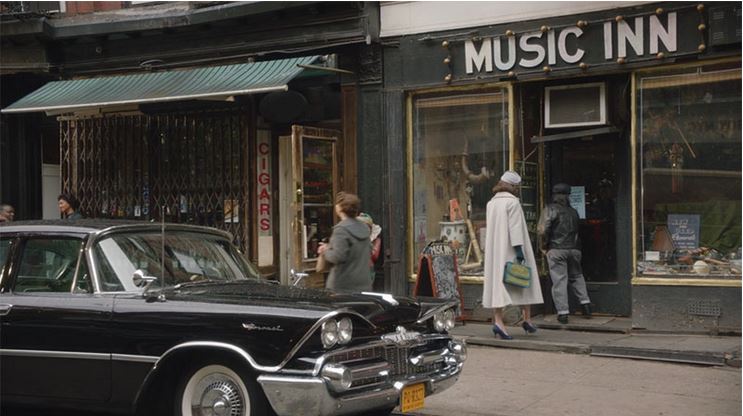 The Music Inn is another real location, and is still looking as quirky as it probably did in Greenwich Village in the ’50s. The store is located at 169 West 4th Street and opened in 1958, the year the show is set. The interior has instruments hanging from the ceiling and rows of records, and does have a lower level (now filled with percussion instruments).  It is here where Midge is introduced to the underground party records downstairs. Party records were a sub-genre of comedy filled with raunchier material for “Adults-Only.” Midge buys one by Redd Foxx, a real-life comedian like many of the celebrities mentioned throughout Maisel, including Lenny Bruce.

Midge ends up in a rally in Washington Square Park organized by none other than Jane Jacobs, (that Jane Jacobs was the organizer for this rally is not exactly historically accurate, but we’ll let that one slide for now…) protesting Robert Moses’ plan to build a highway through the park.  Midge has no idea who Jane Jacobs is but quickly decides she supports the cause. Jacobs calls her onto the stage to “share her story.” 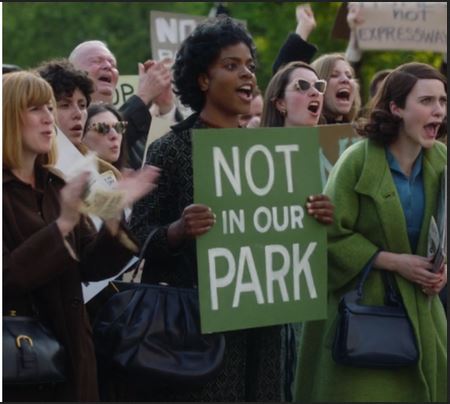 The posters in the crowd scene ARE historically accurate and are something to behold!  The production team spared no expense in researching and recreating props, costumes, and set pieces that make this show really sing. 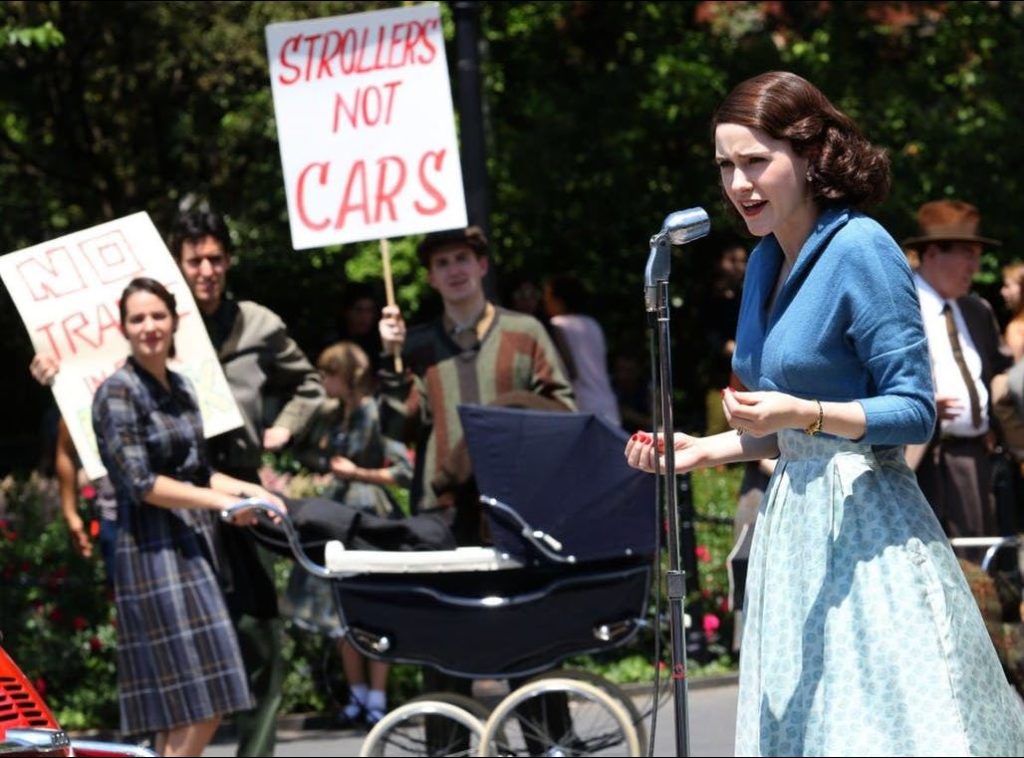 And of course, we all know the outcome of that epic battle between Jane and Robert…!

One response to “The Marvelous Mrs. Maisel is a Visual Ode to the Village”