MacDougal Sullivan Gardens, the incredibly charming enclave of twenty-two houses on a block bounded by MacDougal and Sullivan Streets, Bleecker and Houston Streets, has a long and storied history.  As most people know, the houses were originally built in the 19th century as single-family houses — in 1844 and 1850 to be exact, by a merchant named Nicholas Low. As most people also know, after a period of decline in the late 19th and early 20th centuries, when the neighborhood was awash with new and largely-poor immigrants, they would undergo a dramatic re-development in the early 20th century which would include the creation of a central garden and renovation of their facades with removal of their stoops and new, neo-Colonial entryways.  And of course in 1967, MacDougal Sullivan Gardens would become one of New York City’s first designated landmark historic districts.

But fewer know the history which predates the construction of these houses in the mid-19th century, and how this land went from Native American land, to farmland, to charming urban enclave.

Well that evolution hit a critical milestone on February 27, 1790, when the land upon which MacDougal-Sullivan Gardens now stands was first put up for sale as building lots. 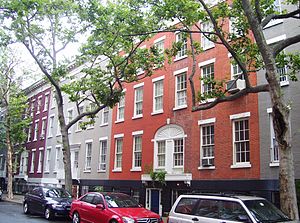 Of course the history of MacDougal Sullivan Gardens goes back even further than that.  According to its landmark designation report, the history of the land on which MacDougal-Sullivan Gardens sits can be traced all the way back to the early years of New Amsterdam, when Manhattan was occupied by the Dutch. The parcel containing the MacDougal Sullivan block was conveyed in 1644 by the Council of New Amsterdam to Pieter Santomee, a freed African slave who had originally worked for the Dutch West India Company, as part of the first settlement of free blacks anywhere in North America. The land eventually passed through several owners  –the English, who took over the colony in 1664, were much less receptive to blacks being allowed to own property or have citizenship rights, making it extremely difficult for Santomee and his fellow black farmers to hold onto their land. The land was eventually acquired by Nicholas Bayard in 1755, whose son conveyed it to Daniel Ludlow and Brockholst Livingston in trust for the benefit of creditors. In 1790 the trustees began conveying the lots they had created on the land — the first time it was to be sold for urban development. The land was purchased by merchant Nicholas Low in 1796, but it would remain undeveloped for several decades.

In 1844 the estate of Nicholas Low built the rows of three-story and basement houses, in the then fashionable Greek Revival style, on MacDougal and Houston Streets. A similar row was completed on Sullivan Street in 1850. The last of the four block fronts built on Bleecker Street (1860) had four stories and dormered roofs. The dormered roof was considerably out of fashion by this time; most likely the developers were interested in maintaining uniformity of the streetscape.

By the late 19th century the Village, and especially the “South Village” south of Washington Square in which these houses were located, was awash with immigrants.  No longer a middle-class precinct, the area became home to the working-class and in some cases the very poor.  The impoverished “Little Africa” neighborhood was located directly west, and the “rookeries” or tenements and rooming houses of the Minettas (Street, Lane, and the no longer extant Minetta Place) were among the most notorious in the city, and the subject of exposes by the likes of Jacob Riis. During this time the houses of today’s MacDougal-Sullivan Gardens also fell on hard times, and were known to be in a state of decay and dilapidation.

The area would undergo yet another transformation in the early 20th century as artists and those attracted to the arts started to move into the area. Some enterprising individuals took advantage of this newfound popularity of the Village and set out to reform the old housing into new. In 1920, the Hearth and Home corporation bought the block for re-development. The president and founder of this corporation was William Sloane Coffin. Coffin, the grandson of the founder of the W. & J. Sloane furniture and rug emporium and an officer in the business, was a philanthropist who had a strong interest in housing reform.

Sloane’s intention was to create modestly priced housing not for the Italian immigrants of the neighborhood (some of whom lived in the buildings at the time of purchase) but rather for “writers, businessmen, artists, actors and musicians.” Architects Francis Y. Joannes and Maxwell Hyde were employed for the project. Alterations to the exteriors were kept to a minimum and included removing the stoops and replacing the original entries with windows set within Colonial Revival frames. On the interiors, the houses were divided into duplexes, and modern amenities were added.  As an afterthought, Coffin decided the make the interior open space of the block into a common garden for use by all of the tenants of the houses. 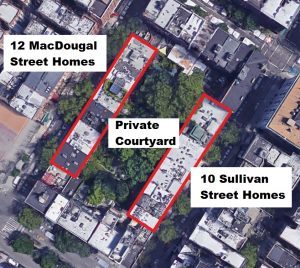 The renovation of the buildings was completed by 1921, and the garden by 1923. The houses were sold to individual owners in 1924, with the integrity of the project maintained by the MacDougal-Sullivan Gardens Association. Almost 100 years later, residents of this complex have managed to maintain this garden, and this incredibly special and unusual enclave in our neighborhood.