From the mid-19th through the early 20th century, the East Village was the center of what came to be known as Kleindeutschland, or “Little Germany” – the largest German-speaking community in the world outside of Berlin and Vienna. It contained countless houses of worship, social halls, labor and community organizations, charitable institutions, and eating and drinking establishments.  The 1904 General Slocum Ferry disaster, which killed over 1,000 largely German residents of the neighborhood, anti-German fervor of World War I, and other demographic changes led to the community’s dissolution, but remnants of it can still be seen today in the East Village. To help explore just some of these sites, we have created a new Kleindeutschland Guided Tour on our recently-launched East Village Building Blocks site — see it here. 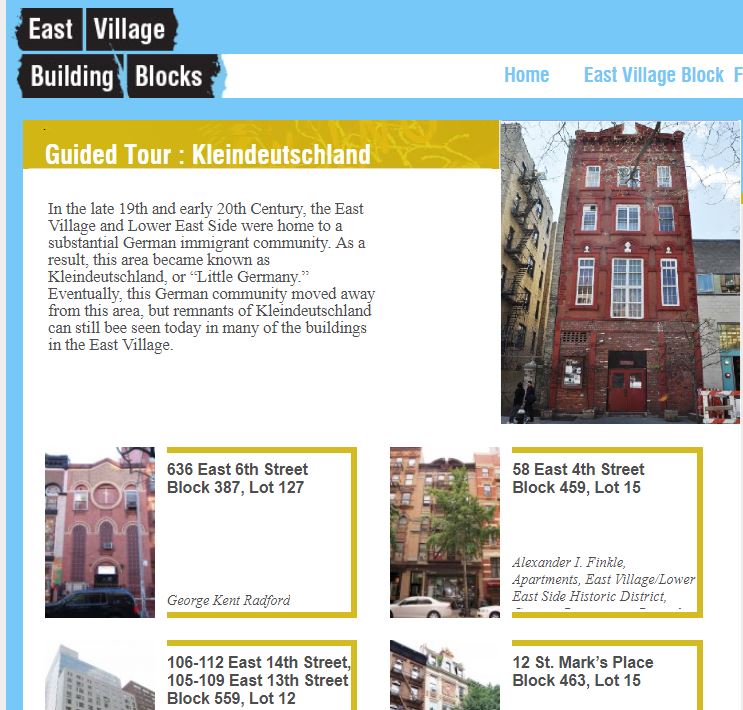 Here are just a few highlights:

Built in 1870, the Germania Fire Insurance Company Bowery Building was designed by prominent German-American architect Carl Pfeiffer. The Germania Fire Insurance Company building recalls the time when the Bowery was a major thoroughfare of America’s leading German-American neighborhood. The Germania Fire Insurance Company was founded in 1859, counting many prominent German-born New Yorkers among its executives and directors. The firm was prospering when it constructed the building to house its Klendeutschland office, although it moved this office farther up the Bowery about ten years later. Interestingly, though Pfeiffer’s application stated that the building was to be an office structure, the company likely intended it to be a tenement that contained Germania’s office, misrepresenting the building’s function to enable the company to skirt the city’s tenement laws. 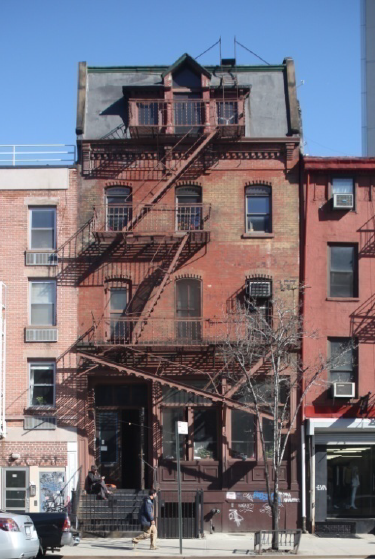 The Ottendorfer Branch of the New York Public Library (NYPL) at 135 Second Avenue was designated an individual New York City landmark September 20, 1977, and an interior landmark on August 1, 1981.  The library was built in 1883-4 by Oswald Ottendorfer, a wealthy German newspaper magnate, along with the adjoining Stuyvesant Polyclinic Hospital. The hospital was originally called the German Dispensary (‘dispensaries’ were the community health clinics of their time) and it offered medical care to the poor at low or free rates. 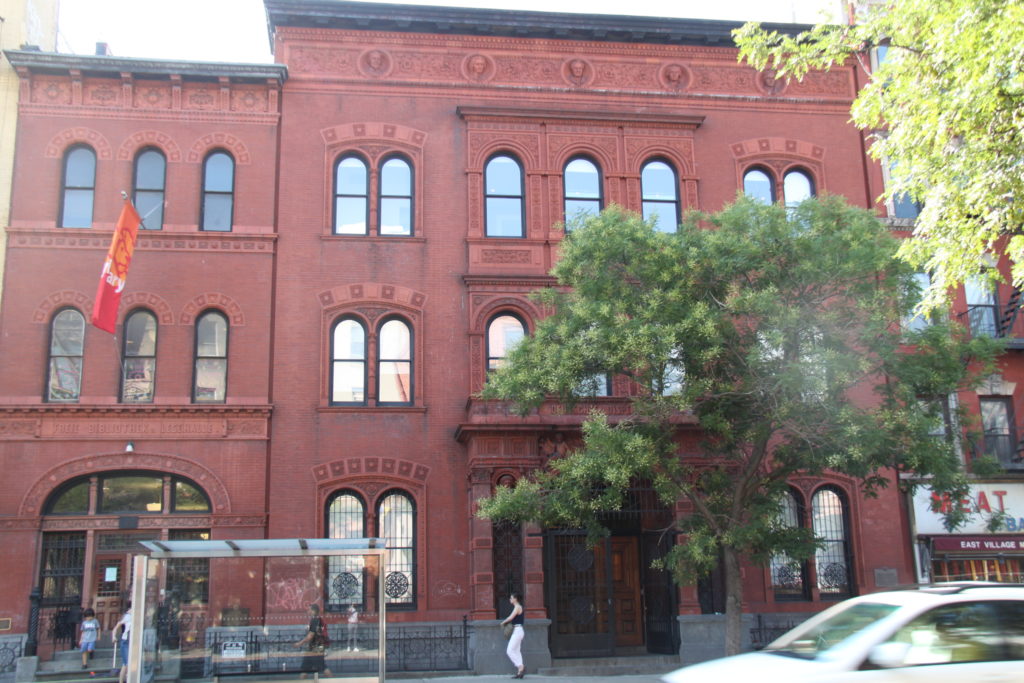 East 7th Street was known as Decatur Place in the mid-1800s. A number of its residents were prominent clerks and merchants, mostly of English and Irish descent. Decatur Place experienced a major architectural and social transformation in the early 1860s. In three years alone, nine new tenement buildings were constructed on the block, paving the way for an influx of first- and second-generation German immigrants. This was the beginning of Kleindeutschland or “Little Germany,” a sprawling ethnic neighborhood centered on Avenues A and B. Jobst Hoffmann, a Bavarian-born architect, not only lived on the block but also designed two of its tenements at 100 and 112 East 7th Street. The façade of the latter building features several architectural sculptures of “Green Men,” a traditional Germanic motif. 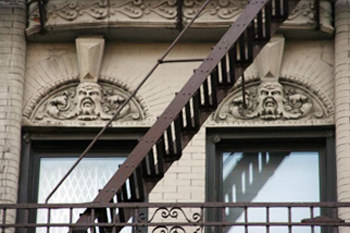 The building that today houses the Sixth Street Community Synagogue was originally built by German immigrants in 1847 as the Evangelical Lutheran Church of St. Matthew, and ten years later became the German Evangelical Lutheran Church of St. Mark.  On the morning of June 15, 1904, the steamship General Slocum was bringing a group of parishioners from the Church of St. Mark to a picnic outing when it caught fire, and killed over 1,000 passengers. This disaster contributed to the German community leaving this neighborhood for the Upper East Side’s Yorkville. In 1940 the building became home to the Community Synagogue. Read more here. 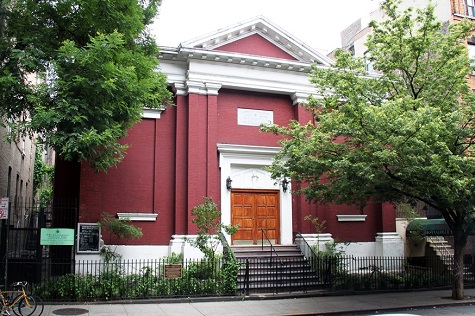 This New York City landmark was built in 1888-1889 as the home to the German-American Shooting Society Clubhouse. Though the days of rifle shooting societies and local militia groups in the East Village are largely past, this unique architectural holdout reflects the once vibrant community of German-speaking immigrants that made much of the East Village and Lower East Side home throughout the nineteenth century. 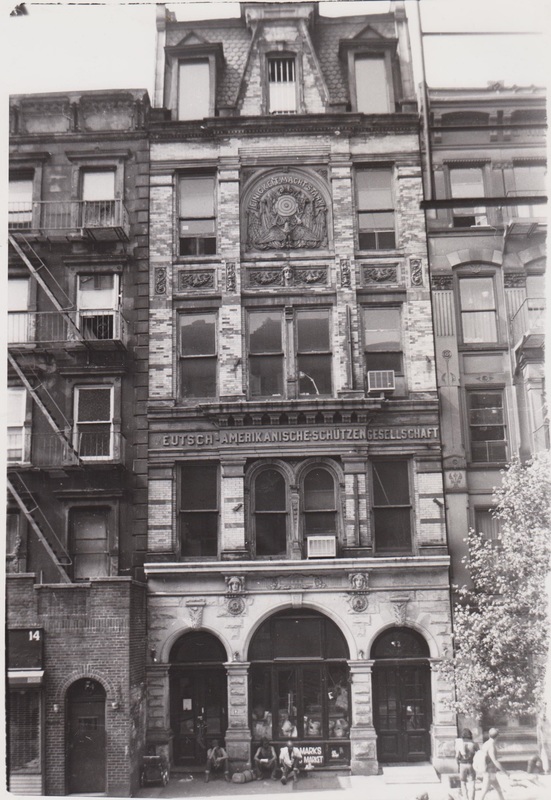 These seven buildings are just a small sample of those dating to when the East Village was a German-American community. Click here to view the whole tour.
Enjoy this tour? We also have East Village Building Block tours on African American History, the Jewish/Yiddish Rialto, Historic East 10th Street, and Places That Matter.