This is one in a series of posts marking the 50th anniversary of the designation of the Greenwich Village Historic District.  Check out our year-long activities and celebrations at www.gvshp.org/GVHD50.

On March 6, 1970, the unexpected detonation of a bomb being assembled by members of the Weather Underground tore through Greenwich Village and the heart of its newly-designated historic district, destroying the townhouse at 18 West 11th Street.  The radical group behind the explosion was committed to protesting against what they saw as grave injustices, particularly the war in Vietnam, and had been working out of the basement of the building. The explosion sent shockwaves, literally and figuratively, throughout the neighborhood, and left in its wake a gaping hole and a raging debate about how to fill it.

Two people preparing the bomb were killed instantly (Diana Oughton and Terry Robbins), as was a third “Weatherman” who was just walking in (Ted Gold); two others were injured but emerged from the scene in shock and later escaped (Kathy Boudin and Cathy Wilkerson).  One of the proposed targets was the Fort Dix, New Jersey Army base, to “bring the [Vietnam] war home”.

The Federal Bureau of Investigation (FBI) put the escaped Weathermen on its Ten Most Wanted Fugitives list, but they evaded capture for a decade. Wilkerson surrendered in 1980. Boudin was caught in 1981 for her role in a Brink’s armored car robbery.

The former Greek Revival townhouse at 18 West 11th Street was originally built in 1845. In the 1920s, the home belonged to Charles E. Merrill, co-founder of Merrill Lynch.  In 1930, Merrill wrote a note to the next property owner, the Broadway librettist Howard Dietz, wishing him joy in “the little house on heaven street.”

Poet James Merrill lived there for his first few years and addressed the explosion and the passions involved in a 1972 poem titled “18 West 11th Street”. It opens:

In what at least

Seemed anger, the Aquarians in the basement

Had been perfecting a device.

For making sense to us

If only briefly, and on pain

Of incommunication ever after.

The explosion left not just a raging fire, but a raging debate about what was appropriate to build in its place.  This was one of the first potential new buildings to be designed in the recently-designated Greenwich Village Historic District (which had only been designated less than a year earlier, on April 29, 1969) or in any landmarked or historic district in New York City.  The question presented itself — what should new buildings in historic districts look like?  And what should a new building replacing one lost in this tragic manner look like, and should it reflect or memorialize this disruption in history?

Hugh Hardy, the architect, and Francis Mason bought the buildingless land at 18 West 11th Street after the explosion. Mr. Hardy came up with a design which was certainly the subject of some debate, combining a strongly historicist base and top floor which merged seamlessly with unified row of Greek Revival houses of which it was a part with a jarringly angular and modernist jutting bay window inserted into the center, albeit in the same traditional brick material as the rest of the house and the row.

There were strong reactions against the new design, with many expressing a preference for one which would have simply replicated the prior structure. “It was this whole idea that a new building should express something new,” Hardy has said, adding, “we were deeper into diagonals at that point.”  Some said the design was a perfect combination of traditional architecture with a nod to the explosion and its disruptive impact upon the street and its history.  After much debate, the proposed design was narrowly approved by the Landmarks Preservation Commission.

But for years afterward, the site still remained vacant. In 1978, it was sold to a couple that used Hardy’s design for the exterior, with the unique facade and the bay window at the sharp angle jutting out toward the street.  The building was also known for the Paddington Bear placed in the bay window in costumes that changed with the weather. A new rear facade and roof addition were approved in 2014.

No. 11 West 18th Street is actually only one of several dozen new buildings which have been approved for construction within the Greenwich Village Historic District, though few can match it for drama in terms of its origin story or design.  But all of those new buildings are of interest to us, and that’s why we released our report cataloging for the first time in one place all new buildings approved by the NYC Landmarks Preservation Commission in the Greenwich Village Historic District since its designation in 1969 — click HERE to see the report.  It’s been updated since its release each time a new building has been approved, and to date we have recorded forty-two such approvals, though not every approved building was constructed. The report documents each application including renderings or pictures of proposed buildings, architect, links to permits, date of approval and location. Additionally, it features an overall timeline and map of the buildings making for a comprehensive study of a historic district which is nearly as old as the New York City landmarks law itself, which was enacted in 1965. It’s just one of many ways in which we are noting the impact and legacy of the designation of the Greenwich Village Historic District, and looking ahead at its future. 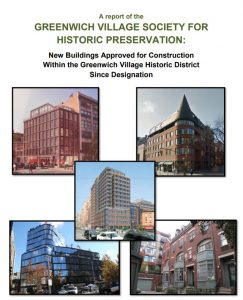 To find out more about the Greenwich Village Historic District’s 50th anniversary, its history, and celebrations, go to www.gvshp.org/GVHD50.