When the days are finally seeming longer than they used to be, the beautiful details of the Village begin to reveal themselves in new ways. Today, I’m thinking about public art, and a special spot in the Greenwich Village Historic District. Bleecker Street Park is a place to chat on the phone, eat a cupcake from Magnolia, or listen to children playing, all under the watchful eyes of Chaim Gross’s lyrical sculpture “The Family.” Chaim Gross was born on March 17, 1904 in Ukraine, and landed in New York as an art student and a Jewish refugee of WWI in 1921. Through his art and his foundation – the wonderful Renee and Chaim Gross Foundation – he remains here with us. 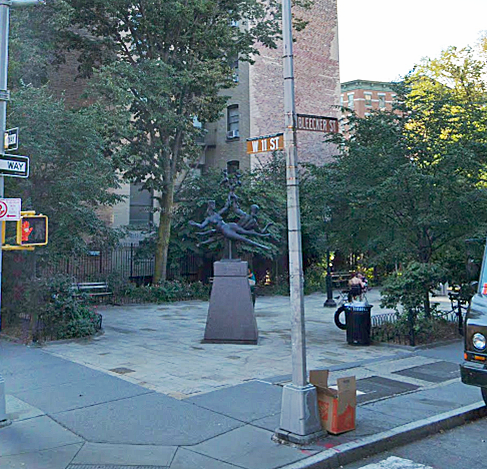 Gross, whose art can be found in the permanent collections of such institutions as the Metropolitan Museum of Art and the Museum of Modern Art, worked and lived in the Village for much of his life. Gross attended the Beaux-Arts Institute of Design from 1922-25, and the Art Students League in 1926, with sculptor Robert Laurent. In 1926, Gross began to exhibit his sculpture at the Jewish Art Center (then in the Bronx), and in 1927, at the Salons of America exhibitions at the Anderson Galleries, the Whitney Studio Club at 10 West 8th Street, and – his first solo exhibition – at Gallery 144 in New York City. Also in 1932, Gross married Renee Nechin (1909-2005), and they had two children, Yehuda and Mimi.

Chaim also took classes at the Educational Alliance Art School on the Lower East Side, and later became a teacher there, as well as at the New School. During the Depression, he worked with the Works Progress Administration’s Public Works of Art Project. Through these programs, Gross taught art, and created sculptures for schools, public colleges, and Federal buildings. Gross was also recognized during these years with a silver medal at the 1937 Exposition Universelle in Paris.

Chaim had a studio in the Village in 1927 at the outset of his career. The first one on 14th Street was very small, but he moved to 63 East 9th Street in 1930. He remained there until 1953, when the building was slated for demolition to build the current Randall House. Chaim was a fixture in the area for about 6 decades. He and Renee very deliberately chose to move to LaGuardia Place (at the time West Broadway) in order to combine home and studio. Previously, he had biked down from his home on 105th St to his studio to work in the Village.

Chaim’s Work, and “The Family” on Bleecker

Working predominantly in wood, stone, and eventually bronze, Chaim’s artworks convey a sense of movement, geometry, and exuberance in their forms. In 1963, Gross and his family moved to the historic home at 526 LaGuardia Place, where Chaim worked and lived until his death in 1991.

A number of Gross’s sculptures are on public display, but perhaps the most familiar to those in the Village is “The Family,” a bronze sculpture located in the Bleecker Street Sitting Area on the corner of Bleecker and West 11th Streets. Cast in 1979, the sculpture was presented by Gross to the city in 1992 in honor of former Mayor Ed Koch. This joyful sculpture, which depicts a loving family, is well-situated overlooking the Bleecker Street Playground.

Mimi Gross has pointed out that, while most NYC parks are fenced in, “The Family” has the distinction of being visible at the corner of Bleecker Park without a fence around it, truly showing the family flying free over the intersection, on its light pedestal.

Chaim Gross and his wife Renee purchased 526 LaGuardia Place in 1962 after living and raising their children on the Upper West Side. Gross had long had his studio in Greenwich Village at 63 East 9th Street, but with the acquisition of the new building – an 1873 industrial building with loft spaces – he was able to incorporate a living and workspace in one structure. The Grosses converted the building back to residential living and added a sculpture studio on the ground floor.

In 2016, we installed a historic plaque on the building at 526 LaGuardia Place, recognizing Chaim Gross’s art, as well as his life in that building with Renee. They not only raised a family in the neighborhood, but they also raised an institution. In the last year, the Gross Foundation completed an amazing renovation of Chaim’s studio, especially significantly its angled wall of windows – GVSHP held a program with the Gross Foundation and others about the historic restoration of artist studios and spaces in the Village, which you can watch here. 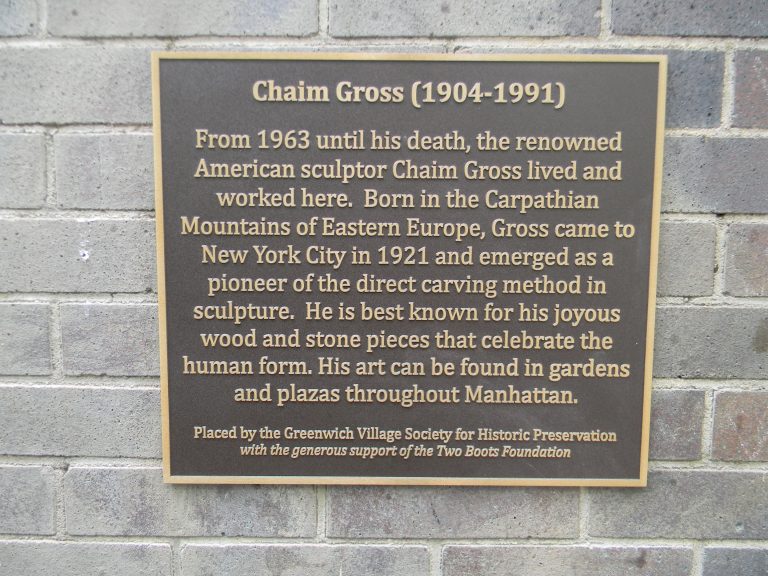 Chaim’s daughter Mimi Gross is a well-known painter (whose works grace the house), set-and-costume designer, and creator of many installations. Her work is included in numerous public collections, including the Metropolitan Museum of Art, the Art Institute of Chicago, the Museum of Contemporary Art in Los Angeles, The Brooklyn Museum, the Jewish Museum, the Nagoya Museum of Art, the Onasch Collection in Berlin.

The Foundation is open exclusively for guided one-hour tours, which take place on Thursdays & Fridays at 1 pm and 3pm. Admission is $15.  Online reservations are required. Go here to reserve tickets, and also keep an eye on their website, as they will be expanding tour times later this year.