Villager, dancer, and choreographer Merce Cunningham is an artist whose work continues to live vibrantly in 2019, which marks Cunningham’s centennial. The Merce Cunningham Centennial is celebrating a century of artistic expression through events, presentations, and discussions about Merce, dance, and his influence on culture. This Village Preservation Oral History participant will continue to be a foundational figure of the arts that have defined Greenwich Village, and more specifically the Westbeth Center for the Arts, which was also home to dancer/choreographer Martha Graham.

Born Mercier Phillip Cunningham on April 16, 1919, in Centralia, Washington, Merce was one of the most important choreographers of the 20th century, as well as one of the greatest dancers. He founded the Merce Cunningham Dance Company (MCDC) to unrelentingly pursue innovation in dance, which led to collaborations with other forms of art, including visual art, video, and other forms of mixed media. This became a defining trademark of the MCDC, accompanied by spare, vital dance gestures. MCDC was located at Westbeth from 1971 until 2012 when the dance company dissolved, though the Merce Cunningham Trust continues to do the work of remembering Cunningham and celebrating his centennial.  In his oral history with GVSHP, Merce provides an insightful account of his experience at Westbeth (click HERE for the full interview).

In his works, independence was central: dancers were often alone even in duets or ensembles, and music and design would act as environments, sometimes hostile ones. His movement — startling in its mixture of staccato and legato elements, and unusually intense in its use of torso, legs and feet — abounded in non sequiturs… He was American modern dance’s equivalent of Nijinsky: the long neck, the animal intensity, the amazing leap. In old age, when he could no longer jump, and when his feet were gnarled with arthritis, he remained a rivetingly dramatic performer, capable of many moods.

His dances were about small gestures, about people in close movement with each other, but not necessarily interacting with each other – not unlike the ways that people coexist in New York City. His costumes highlighted the lines of the body, and the small movements that convey emotion. For the early part of his career as a choreographer, Cunningham was his own principal dancer.

The Merce Cunningham Trust is holding events all year, and has started their own blog, to honor the centennial, which includes quotes (see below), stories, personal video remembrances, and so much more.  Reflecting his 70 years of creative practice, Cunningham’s exploration forever changed the landscape of dance, music, and contemporary art. 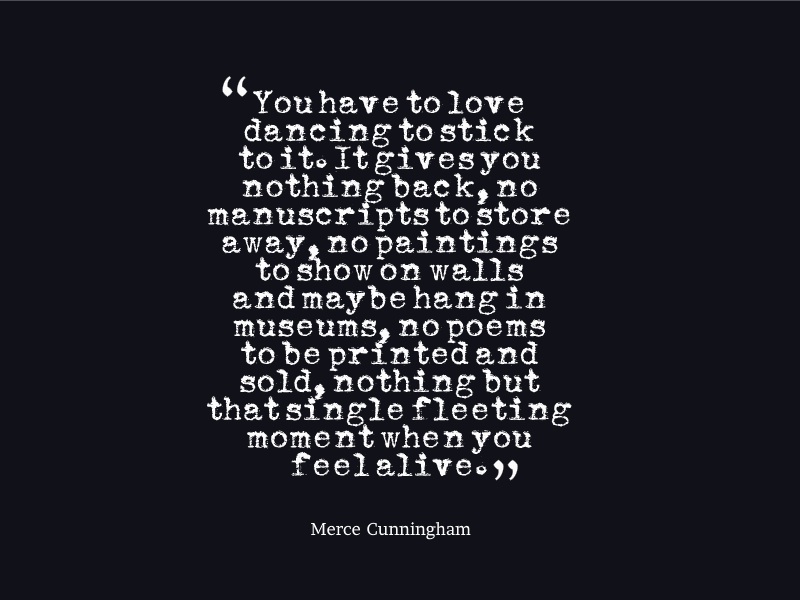 He was a dance-maker, a chance taker, a boundless innovator, a film producer, a teacher, and a fierce collaborator – with the likes of his partner John Cage (who was known to hang out at the San Remo Cafe), and the artist Robert Rauschenberg (who lived and worked at 381 Lafayette Street). Cunningham created over 180 dances, prolific drawings, and trenchant writings.

Merce Cunningham sat with a Village Preservation oral historian, and spoke candidly about his time in the Village, watching it change, and spending so much time at Westbeth. He wasn’t a resident, but he was deeply involved with the former Bell Laboratories turning into an arts community. He remembered:

But the space, there are two things about it I remember from the very beginning. First of all it was just the size. It was wonderful. And I finally woke up to the fact about the views. It took awhile, but I suddenly realized you could see out here and see a great deal of Manhattan, and up here see the river and every once in a while a big boat will pass. I kept thinking what it must have been like a hundred and fifty years ago with the river dotted with sailboats.

Merce Cunningham led his company up until his death at age 90. His legacy in the world of dance continues to resonate deeply to this day. To see a full transcript of this interview, click HERE.

GVSHP shares our oral history collection with the public, highlighting some of the people and stories that make Greenwich Village and the East Village such unique and vibrant neighborhoods. Each of these histories includes the experiences and insights of long-time residents, usually active in the arts, culture, preservation, business, or civic life.

One response to “Merce Cunningham’s Centennial: Leaping into 100”