On May 30th, 1922, fifty-seven years after Abraham Lincoln was assassinated, over 35,000 people gathered at the western end of the National Mall in Washington D.C. to see him once again. Sitting within the grand, neoclassical Lincoln Memorial building designed by architect Henry Bacon, the statue of the beloved president seemed to convey to the crowds the dignity and concern he had demonstrated while living. To those crowds, and to generations over the last century, that statue as much as any has molded our image of Lincoln as a great and thoughtful leader, and savior of our nation.

The nineteen-foot tall sculpture is magnificent, carved from twenty-eight blocks and 175 tons of Georgia white marble. The sculptor, Greenwich Village resident Daniel Chester French, was present for the ceremony, the culmination of his eight-year project. Nevertheless, as with most of French’s subjects, Lincoln was the star of the day, overshadowing French almost entirely.

Although not well-known today, Daniel Chester French (1850-1931) was a prolific and leading American monumental sculptor in his time who transformed standards for funereal sculpture, intertwining portrait and allegorical forms within architectural contexts. He was also a longtime Village resident, splitting much of his adult life between a home at 125 West 11th Street, where he moved in 1888, and his other home in Stockbridge, Massachusetts, which he bought in 1897 and named Chesterwood. As revealed in the recently published biography Monument Man: The Life & Art of Daniel Chester French, by Harold Holzer, French had a reticent manner and an intense passion for his work, which adorns the country’s governmental and institutional sites.

Beginning in 1911, French conducted significant research on Abraham Lincoln, particularly as he comported himself in the throes of the Civil War. French investigated photographs, eyewitness descriptions, and even Leonard Volk’s castings of Lincoln’s hands. In 1912, French’s standing Lincoln statue was erected at the Nebraska State Capitol, after which French continued developing plans for the seated Lincoln statue, the best-known sculpture of his career. As he strengthened his conceptual objectives, French completed a number of plaster models before embarking on the final project. The Piccirilli Brothers, who owned a marble cutting workshop in the Bronx, cut pieces of marble for French to perfect his painstakingly detailed design, which included Lincoln’s serious expression, the reeds wrapped in the arms of Lincoln’s chair, and Lincoln’s animated and starkly contrasted hands. French put extra thought into Lincoln’s hands – Lincoln’s left is clenched, while his right rests open and relaxed – which French modeled on casts of his own hands. After carving each piece, which took a full year, French assembled the statue at the memorial site in Washington, D.C., in time for the dedication in 1922.

French was born in Exeter, New Hampshire, spent most of his childhood in Cambridge and Amherst, Massachusetts, and moved to Concord with his family in 1867. At this time, he spent two semesters at the Massachusetts Institute of Technology, after which he left school and began studying sculpture and clay modeling with Abigail May Alcott, sister of Louisa May Alcott, who also lived in Concord. For a month in 1870 he apprenticed with John Quincy Adams Ward in New York City, and in the winters of 1871 and 1872, French took anatomy classes with William Rimmer and drawing lessons with William Morris Hunt. From 1874 until 1876 French lived in Italy at the invitation of Preston Powers, the son of the neoclassical sculptor Hiram Powers, and worked in the studio of sculptor Thomas Ball. French was one of the last significant American sculptors to train in Italy instead of Paris, after which he returned to the United States and worked out of studios in Concord, Boston, and Washington D.C. In 1888 he moved to the townhouse at West 11th Street, and spent the rest of his life moving between New York City and Stockbridge, Massachusetts.

A number of talented artists had a hand in the completion of the Lincoln Memorial. Architect Henry Bacon, who designed the structure of the memorial building, was the first person enlisted to work on the project, and served as French’s primary collaborator. The two had met while working for the architectural firm McKim, Mead and White at the World’s Columbian Exposition in Chicago in 1893, and had already worked together on about fifty projects. Jules Guerin created the watercolor illustrations for Bacon’s proposed memorial and then produced the two sixty-by-twelve foot canvas murals hanging inside. Ernest C. Bairstow, an architectural sculptor, carved the building’s exterior details, as well as the lettering for the text inscription above the Lincoln statue. Evelyn Beatrice Longman, French’s protégé, executed the interior decorative carvings. In addition to cutting the statue’s marble, The Piccirilli Brothers sculpted the tripods on either side of the eastern steps of the Memorial. Finally, Royal Cortissoz, a columnist and art critic for the New York Herald Tribune, drafted the wall inscription above the statue.

From the moment of its presentation to the public, The Lincoln Memorial has served as an evolving, and contradictory, symbol of civil rights. On the day of the dedication, despite the ceremony’s emphasis on unity and emancipation, the audience’s seating was segregated and the only African American speaker present, the Tuskegee Industrial School’s Dr. Robert Russa Moton, was censored. Still, in 1939 and 1963, respectively, Marian Anderson and Martin Luther King Jr. appeared at this memorial, reclaiming the site as a place where people speak out and band together to fight for social justice.

On the Chesterwood website, French is quoted as saying, with regard to his Lincoln statue: “What I wanted to convey was the mental and physical strength of the great war President and his confidence in his ability to carry the thing through to a successful finish.” In his lengthy and accomplished career, French himself has demonstrated discipline and thorough artistry in his many pieces that memorialize the country’s important figures. And still, as French’s biographer points out, the cultural meanings of French’s sculptures are ever-shifting. The Confederate memorial controversy in particular has brought public statues, and their creators, critically back into public consciousness.

Other work by Daniel Chester French includes The Minute Man statue (1871–75) at the Minuteman National Historic Park; the John Harvard statue (1883-84) at Harvard University ; the memorial of Dr. Thomas Gallaudet (1885-1889) at Gallaudet College in Washington D.C.; the Milmore Memorial (1889-1893) at the Forest Hills Cemetery in Jamaica Plain, MA; the John Boyle O’Reilly Memorial (1892-96) in the Fenway in Boston; statues of General Ulysses S. Grant (1899) in Philadelphia; the statue of George Washington (1900) in Paris; the Richard Morris Hunt Memorial (1896-1901) at Fifth Avenue at 70th Street in New York City; the Alma Mater statue (1900–03) at Columbia University; three pairs of bronze doors (1894–1904) at the Boston Public Library; The Four Continents statue (1903–07) at the former United States Custom House in New York City;  the Melvin Memorial (1906-08) in Concord, Massachusetts; the Standing Lincoln statue (1909–12) in Lincoln, Nebraska; the statue of Ralph Waldo Emerson (1914) at the Concord Public Library; and the Spencer Trask Memorial (1913–15) at Congress Park in Saratoga, NY. 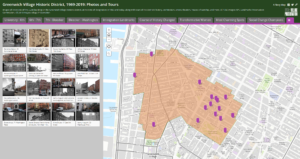 To learn more about the home of Daniel Chester French and the other artists who lived in Greenwich Village, check out the Artists’ Homes tour in our recently released interactive map, Greenwich Village Historic District, 1969-2019: Photos and Tours.