On June 11th, 2019, the New York City Landmarks Preservation Commission (LPC) designated seven buildings in the area south of Union Square as individual landmarks. While these seven buildings are just a fraction of a fraction of the buildings we called for to be landmarked in connection with the City’s shady Tech Hub “deal”, and none are in danger of being demolished (six of the seven are overbuilt for their zoning), they nevertheless all have storied histories. The Roosevelt Building, where Broadway and 13th Street intersect at 837-847 Broadway/53-63 East 13th Street, is one of my favorites.

There are several reasons why this eight-story building is unique. Designed by architect Stephen D. Hatch, it was built in 1893-94 in a transitional Romanesque Revival/Renaissance Revival style. According to the LPC’s designation report for the building, it is one the many high-rise commercial buildings built in the area south of Union Square during the late-19th century using innovative new technology such as elevators, electricity, and hybrid steel-iron framing. 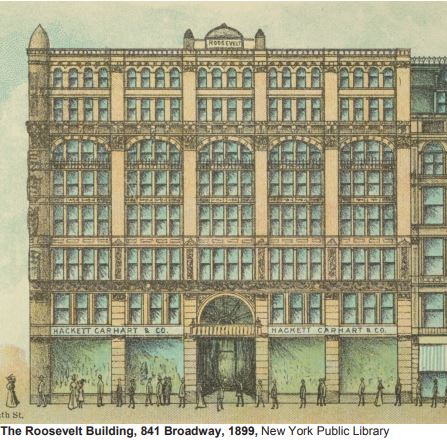 This building also stands out because of its connections to the Roosevelts. The Roosevelts were descended from a Dutch immigrant to New Amsterdam named Claes van Rosenvelt who arrived between 1638 and 1649. Around 1652 he bought a 50-acre farm in what is now Midtown Manhattan, setting up his descendants for real-estate profits and political power.

According to the designation report, on January 26, 1893, The New York Times announced a “New Building for Broadway” at the corner of East 13th Street: “Members of the Roosevelt family have formed a corporation for the purpose of erecting an eight-story office building on the northwest corner of Broadway and Thirteenth Street.” The property was an irregular shape, measuring 125 feet along Broadway and East 13th Street, with a depth of 88 feet from Broadway.

In the 1850’s Cornelius Van Schaack Roosevelt, was a wealthy merchant who owned a mansion on the corner of 14th Street and Broadway. Cornelius’ sons, James A. and Robert Barnwell, were the principal owners of 837 Broadway, while other investors included family members W. Emlen Roosevelt, James Roosevelt, and Frank Roosevelt. The more famous Theodore Roosevelt had not yet assumed the prominent positions that would land his face on Mount Rushmore. He had already served in the NYS Assembly, but he had yet to serve as NYC Police Commissioner, Assistant Secretary of the Navy, NYS Governor, Vice President, or President. Franklin Delano Roosevelt was only 11 years old.

The article described the proposed building: “The structure, which will be completed by the first of next year, will be fire-proof throughout. The walls will be of brick, red granite, and terra cotta, and there will be a large red granite arched entrance on Broadway. The frame of the building will be of steel, and the plan of construction will be a modification of that which has been adopted in Chicago in large office structures. The building will cost about $500,000.”

One of the building’s first tenants was the American Ball Nozzle Company, which was famous for inventing a new, more effective nozzle for fire hoses. Another early technologically innovative tenant was the Porter Air Lighter Company. But most of the building’s early tenants were clothing manufacturers, and during these early decades the primary tenant was Hackett, Carhart & Co. The building was so tied to this company that until 1910 it was referred to by many as the Hackett, Carhart Building.

The building is also historically significant for housing the American Mutoscope and Biograph Company from 1896-1906. Later renamed the Biograph Company, this company is famous for its early advances in filmmaking technology and was one of the first and most recognized American film studios. To accommodate this company, brick piers supporting a track were installed on the building roof, allowing the early cameras to follow the sun and optimize natural light for filming. In addition to early cameras, this company developed the Biograph projector, allowing the film industry to shift from solitary viewers to a group audience. This projector was the beginning of the commercial motion-picture industry.

The Union Square department store Ohrbach’s was the building’s primary tenant from 1937 through the late 1950s, a period of decline for the area south of Union Square. Architectural historian Christopher Gray pointed out, the “later restoration fever that swept over SoHo and adjacent areas missed the Roosevelt Building, which sat dirty with a bare scar where it copper cornice once ran.”

The Roosevelt building is one of ten buildings in our neighborhood Village Preservation fought to have landmarked which were landmarked in June of this year, all of which, like the Roosevelt Building, now have LPC designation reports which can be found on our website that have rich historical details about each of the buildings:  817 Broadway, 826 Broadway, 830 Broadway, 832-834 Broadway, 836 Broadway, 840 Broadway, The LGBT Community Center, 208 West 13th Street, Caffe Cino, 31 Cornelia Street, and the Gay Activist Alliance Firehouse, 99 Wooster Street.  If you want to help us as we fight to extend landmark protections to more of the area south of Union Square (including to buildings which are actually endangered), click here.  If you want to access more designation reports for buildings and areas of our neighborhood, containing fascinating historic information, click here.