Village Preservation shares our oral history collection with the public, highlighting some of the people and stories that make Greenwich Village, the East Village, and NoHo such unique and vibrant neighborhoods. Each includes the experiences and insights of leaders or long-time participants in the arts, culture, preservation, business, or civic life.

Born May 14, 1908, Gayle became involved in preservation efforts by her mid-forties while working at the New York City Planning Department. By the end of the 1950s, Gayle organized the Village Neighborhood Committee, and with its support, led a successful grassroots campaign to save the Jefferson Market Courthouse from demolition and transform the building into a library. Gayle was also a leading advocate for the adoption of the New York City Landmarks Law in 1965 and the creation of the SoHo-Cast Iron Historic District in 1973. And she appears on our Greenwich Village Historic District map on the “Homes of Preservationists” tour,  since she lived at 44 West 9th Street!

On July 23, 1996, Margot Gayle sat down with a Village Preservation oral history interviewer to talk about the many preservation campaigns she had been involved in and helped lead.  When asked how she became involved in preservation work, Gayle said:

Well, my guess is that it was about 1956 or ‘7. I had been working at the New York City Planning Department, which does orient you very much toward thinking about city matters. Alan Burnham was really quite inspirational to me. I will tell you a funny thing: I was on this committee, which was made up of all men members, and I said, “That’s the only committee I want to be on.” They said, “Well, Margot, I hate to tell you, but you probably can’t come to our meetings because we meet at the Century Club for lunch and they don’t allow women under a circumstance like this.” So they went to lunch and they had the meetings, and then I’d read the minutes. [Laughs] Looking back, you’d think I should be annoyed, but I was just glad to be involved…

In the interview, Gayle discusses the origins of her grassroots organizing efforts to save the Jefferson Market Courthouse, and reflects on her memories of fellow preservation pioneers who inspired her along the way, and much more.

There is said to be home movies of her when she used to climb the Jefferson Market tower at Christmas time to light the clock! To that she said:

Well, Ruth (Sprute)  actually does have a tape, a movie. See, originally the clock was not electrically run; it was hand-wound. She shows [in the film] that George Spinner, who was the man who ran a little antique shop on 10th Street, how he would climb up and wind and wind. I think it took him 20 minutes to wind up the weights that have to be lifted. Then they, for about a week, they would keep descending and descending and descending and would operate the hands of the clock. So she has that tape and she is going to have it transferred to videotape, and she, I think will give it to the Greenwich Village committee. If they ask for it…. 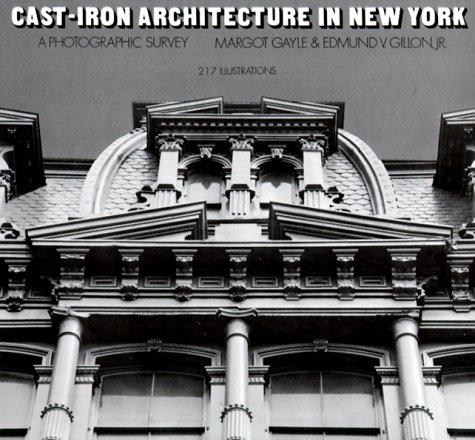 I first became aware of the incredible work and activism of Margot Gayle through her classic book, created with Edmund Gillon, Jr.,  Cast-Iron Architecture In New York.  She was asked about her founding of the Friends of Cast Iron Architecture:

I remember in connection with the cast iron buildings—I had not even known about cast iron buildings until I went to a 1968 Victorian Society program where professor James Fitch, aided by a student named John Waite, and Henry Hope Reed was there, too, talked about how New York had these historic buildings that weren’t appreciated, were unprotected. I got so agitated sitting in the audience. “This is just awful,” I thought. “I wonder what I can do about that.” The upshot of that is that I organized the Friends of Cast Iron Architecture. If one person really puts his mind to something and can inspire a whole group around him, it’s amazing in this complicated world what can be achieved. How do you like that?

What a great way to end the interview!  Access the full Margot Gayle oral history here.

2 responses to “Remembering Margot Gayle, In Her Own Words”