On June 11th, 2019, the New York City Landmarks Preservation Commission (LPC) designated seven buildings in the area south of Union Square as individual landmarks. While these seven buildings are just a fraction of a fraction of the buildings we called for to be landmarked in connection with the City’s shady Tech Hub “deal”, and none are in danger of being demolished (six of the seven are overbuilt for their zoning), they nevertheless all have storied histories. The trapezoid-shaped corner of Broadway and East 13th Street is the site of one of my favorites, 840 Broadway. 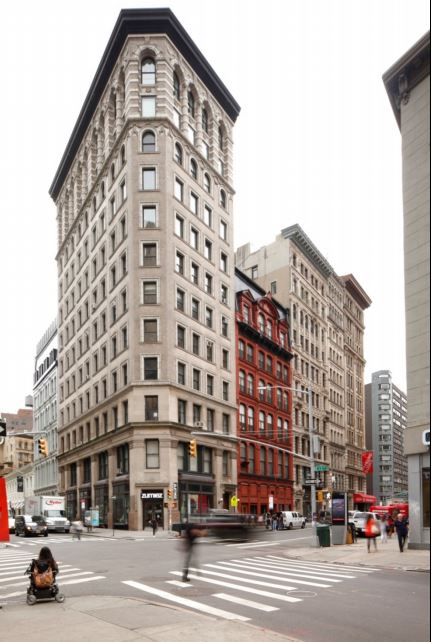 Following the landmark designation of a building, site, or area, the New York City Landmarks Preservation Commission is required to issue a landmark designation report.  This explains the building or area’s historic, architectural, or cultural significance, and describes their significant features at the time of designation, which provides the basis of regulating future changes to these properties.  They can also be a treasure trove of information about the building or area, and the recently-released report for 840 Broadway is no exception.

According to the designation report, 840 Broadway was constructed for garment industry tenants in 1899-1901.  This 12-story, steel-frame Renaissance Revival style building was designed by Robert Maynicke, and is a prominent reminder of Broadway’s turn-of-the-20th century development below Union Square.

The report tells us that permits to construct 840 Broadway were filed with the Bureau of Buildings in December 1899. Construction began in 1900 and was completed in 1901. The structural framing was fabricated by the Hecla Ironworks, possibly at their North 11th Street Williamsburg factory (itself a New York City Landmark).

According to the designation report, “During the first half of the 20th century, the ground (or first) floor was leased to companies that sold men’s clothing. Thompson & Company was first, signing a ten-year lease in 1899. A 1901 ad described 840 Broadway as “The Thompson Building.” It was the clothier’s uptown branch, selling “haberdashery and hats, as well as men’s and youth’s clothing.” The store closed at the end of 1907. Lester & Lester, another men’s clothing company, was the next tenant, followed by the Goodyear Waterproof Company, which sold raincoats and waterproof apparel. Goodyear operated in this location until 1953.”

“In subsequent decades, the store was leased to the World Antiques Center, and later a book store. In 1970, 840 Broadway was converted to “Burnham House,” a cooperative apartment building. Tom O’Horgan, a leading figure in experimental theater who directed the first stage production of the musical Hair at the Public Theater, lived on the 11th floor from the 1980s to 2007.” Most of his early career work was in Off-Off-Broadway experimental theatre productions. One of his earliest projects was Love and Vexations at the Caffe Cino in September, 1963. He later met Ellen Stewart of La Mama fame, and the first play he directed there was The Maids by Jean Genet in 1964. He went on to direct some 50 productions at La MaMa. 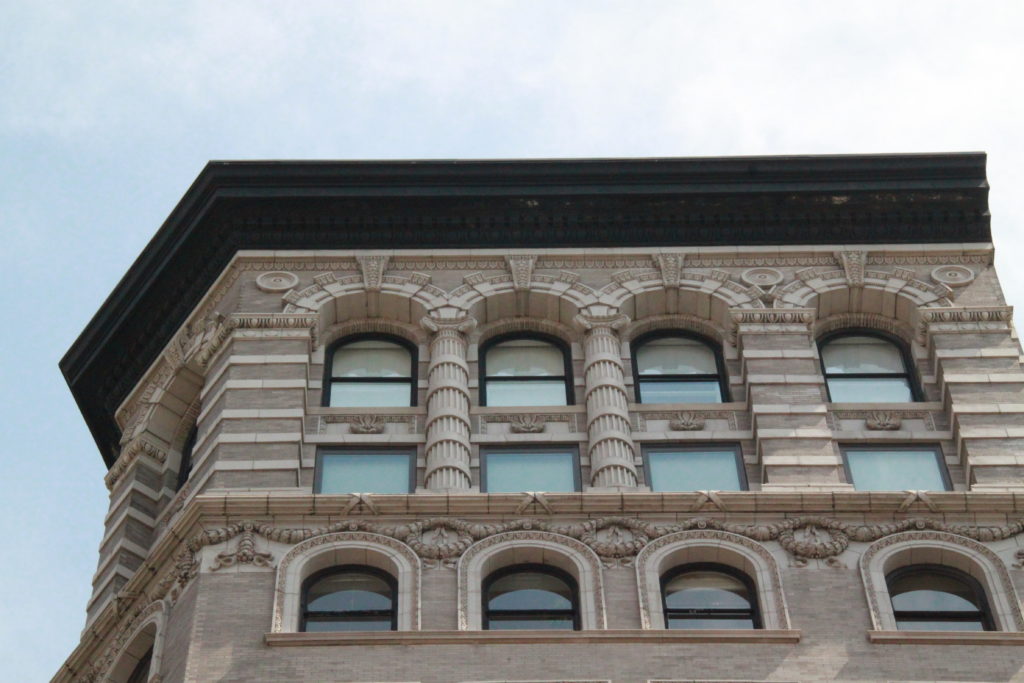 The door surrounds on the first floor were inspired by ancient Greek architecture. Possibly modeled on the door in the north porch of the Erectheum (421-06 BCE), on the Acropolis in Athens, the Broadway entrance is the most ornate.

840 Broadway is one of ten buildings in our neighborhood Village Preservation fought to have landmarked which were landmarked in June of this year, all of which, like 840 Broadway, now have LPC designation reports which can be found on our website that have rich historical details about each of the buildings:  817 Broadway, 826 Broadway, 830 Broadway, 832-834 Broadway, 836 Broadway, Roosevelt Building, The LGBT Community Center, 208 West 13th Street, Caffe Cino, 31 Cornelia Street, and the Gay Activist Alliance Firehouse, 99 Wooster Street.

To read the designation report for any landmarked building, site, or neighborhood in Greenwich Village, the East Village, or NoHo, just look on our website here.

If you want to help us as we fight to extend landmark protections to more of the area south of Union Square (including to buildings which are actually endangered), click here.