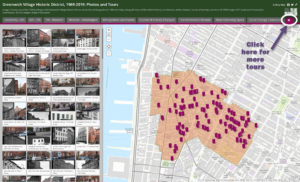 The bohemian poet Harry Kemp was known by many nicknames, including “the King of Bohemia,” “the Byron of the Village,” “the Don Juan of the Village,” “the Vagabond Poet,” “the Tramp Poet,” “the Hobo Poet,” “the Kansas poet,” “the box-car bard,” “the stowaway poet,” and even “unkempt Harry Kemp.” Kemp was born in Youngstown, Ohio on December 15th, 1883. After his mother died, his father left him to live with his grandmother. At 17 years old, Kemp departed home to live as a stowaway on a German cargo ship. He spent the next several years of his life traveling throughout the United States staying with various alternative-living communities and studying at the University of Kansas, where he developed a passion for writing.

Kemp made his way to Greenwich Village in 1912 and lived at 69 Charles Street (then known as 10 Van Ness Place), where writer and Nobel Prize winner-to-be Sinclair Lewis was also a lodger. In 1917, Kemp moved to an apartment on West 10th Street with his wife Mary Pyne, who he met through his involvement with the Provincetown Players. In 1919, Mary died of Tuberculosis, and in 1920, according to the Federal Census published that year, Kemp lived at 6-8 East 9th Street as a lodger. A few years later he married again, this time to Frances McClernan. In 1924, finding the Village too commercialized, Kemp moved to 232 East 11th Street, the Rectory of St. Mark’s-Church-in-the-Bowery (where Village Preservation’s offices have been located since 1999). In 1925, he moved again to 288 East 10th Street, the Saint Nicholas of Myra Orthodox Church, also owned by St. Mark’s. During this time, he operated the Poet’s Theater, a precursor to the Off-Broadway movement, located in the basement of this building. In 1930, four years after his second marriage had dissolved, Kemp lived at 133 MacDougal Street, according to the Federal Census.

Wanting to become a great poet from an early age, Kemp became an ardent self-promoter before he had even published anything. He benefited throughout his life from the patronage and mentorship of others, including Ida Tarbell, Upton Sinclair, Max Eastman (who gave him a part-time position as an editor), and soap manufacturer Joseph Fels. Kemp was a part of the Provincetown Players and performed in Eugene O’Neill’s first play, Bound East for Cardiff. Throughout his life, Kemp operated three short-lived playhouses of his own, contributed to The Masses and The Smart Set publications, and published three autobiographies. Kemp moved full-time to Provincetown, Massachusetts in the 1930s, and lived there until his death on August 8th, 1960.

The writer, publisher, actor, and owner of bohemian hangout Frank Shay’s Bookshop lived at 75 Horatio Street in 1920, as listed in the Federal Census published that year. The online exhibit The Greenwich Village Bookshop Door: A Portal to Bohemia 1920-1925, by the Harry Ransom Center at The University of Texas at Austin, documents the history of Shay, the shop, and those who passed through it. The site describes Shay as “a tall, slender man with sandy hair and glasses” who had “a strong personality and a passion for his work.”

Born Frank Xavier Shea in East Orange, New Jersey on August 8th, 1888, Shay changed his name to associate himself with Shay’s Rebellion, which took place during the American Revolution. A man of many interests and talents, he worked as a lumberjack, seaman, and bookseller at a young age. In 1915, he took over the management of the Washington Square Bookshop at 135 MacDougal Street and was involved with the Provincetown Players’ opening of the Playwrights’ Theatre at the nearby 139 MacDougal Street. He played Scotty in the first New York production of Eugene O’Neill’s Bound East for Cardiff (with Harry Kemp!).

In 1918, Shay married Fern Forrester, and served in the Army shortly thereafter. Upon his return, he opened Frank Shay’s Bookshop at 4 Christopher Street, which he operated from October 1920 until 1924. In addition to selling books from an array of genres, Shay completed a series of publications himself, as was common for bookstore owners at the time. These included a magazine called The Measure, a newspaper called Greenwich Villager, and early works by Eugene O’Neill, Susan Glaspell, and Edna St. Vincent Millay. Shay also ran a circulating library, lectured on bookselling, edited plays for publishing houses, and creatively decorated his window displays – which won his shop much attention, and even earned him a prize.

Many significant visual and performance artists, writers, publishers, and other Village figures visited Frank Shay’s Bookshop over the course of its five-year lifespan. 242 individuals left a signature on the narrow door to the shop’s back office, which was likely put in place when the store expanded in 1921 and which has been preserved at the Henry Ransom Center. The door was originally part of a flat at 11 Christopher Street where novelist Floyd Dell lived, and was moved by Frank Shay when that building was demolished. The signatories include Dell, John Dos Passos, Theodore Dreiser, Harry Kemp, Sinclair Lewis, Upton Sinclair, Sara Teasdale, and many others.

Shay sold the Bookshop and moved to Provincetown, Massachusetts in 1924, the same year Forrester gave birth to their daughter Jean. The couple’s marriage ended in the late 1920s, and by December 1930 Shay had remarried to Edith Foley, with whom he edited the anthology Sand in their Shoes: A Cape Cod Reader. Shay is also known for writing Judge Lynch: His First Hundred Years, a history of lynching in America published in 1938. The study includes statistics still cited today, as well as an analysis of the effectiveness of 20th century anti-lynching laws. Shay died on January 14th, 1954 at the age of 65 in Wellfleet, Massachusetts.

Abraham Epstein, known as the “father of Social Security,” was born on April 20th, 1892 in Lyuban, Russia. Epstein arrived in the United States in 1910, and graduated from the School of Business Administration at the University of Pittsburgh in 1917. He went on to get his master’s degree at Columbia University, and then became the research director of the Pennsylvania Commission on Old Age Pensions from 1918 until 1927. He also worked with the elderly for three years through the international non-profit The Fraternal Order of the Eagles.

In 1927, Epstein was a founding member of the American Association for Old Age Security, for which he served as executive secretary. The organization, which changed its name to the American Association for Social Security in 1933, played a key role in the creation of the Social Security Act, signed into law by President Roosevelt on August 14, 1935, which established the Federal Old Age Benefits program, the Unemployment Compensation program, and the Federal-State Assistance program. After its institution, Epstein pushed Congress to expand the act’s protections, which influenced the 1939 Amendments to the Social Security Act.

Epstein also taught at Brooklyn College and New York University and wrote three books, including Insecurity, A Challenge to America in 1933. Epstein purchased the building 389 Bleecker Street with his wife Henriette in 1929, and lived here until he died abruptly of pneumonia on May 2nd, 1942. His family was one of the founders of Bleecker Gardens, an idyllic courtyard created in 1929 and shared by his and twelve other 19th century homes. As of 2019, Epstein’s son Pierre Epstein continues to live at this address, the only descendant of the founding families to remain.

These individuals are just some of the new people and places we have identified in the Greenwich Village Historic District, 1969-2019: Photos and Tours map over the past month. Others new entries to the “Homes and Haunts of Great Writers” tour include the Hotel Earle/Washington Square Hotel at 101-105 Waverly Place and Hunter S. Thompson at 57 Perry Street. We also added The Woman’s Art Club at 9 West 10th Street to the “Transformative Women” tour, Paulo d’Angola and Anthony Portuguese at Washington Square Park to the “African American History” tour, and the entirety of the brand new “Firehouses” tour.

The development of this map is a labor of love, and depends upon the feedback, questions, and suggestions from the public. We look forward to hearing from you about other individuals and events that have shaped the Village over time!

Our current tours include: