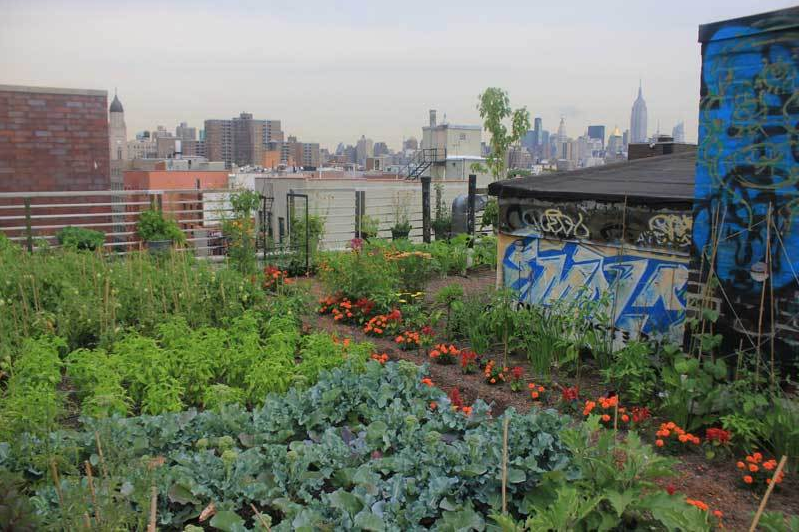 We at Village Preservation keep tabs on all different types of preservation, including environmental sustainability.  So we’ve been really interested to learn about the expanding opportunities in our neighborhoods for urban agriculture and beekeeping.

Urban agriculture is becoming a big thing in New York City. If you are interested, start looking up! Rooftop farms are a beautiful, creative solution to local farming in an otherwise inhospitable environment. With ground space at a premium in our fair burgh, New York has positioned itself as a ripe hotbed for the implementation of the agricultural trend. From the East Village to the West Village, from fancy buildings to squats, from schools to restaurants, the urban rooftop farming movement is taking hold, and New Yorkers are reaping the benefits in so many ways.

The East Village has a fantastic farm on Avenue C between East 2nd and 3rd Streets atop the Umbrella House. The Umbrella House co-op has come a long way since the 1980s when squatters occupied what was then an abandoned city-owned tenement. 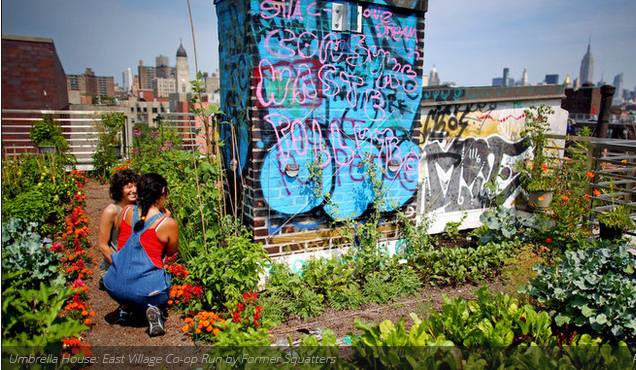 What sets this co-op apart beyond its rich history and the critical role it has played in the East Village’s varied and contentious history of squatting, is its “more utopian and collectivist ethos.” Many of the original squatters who lived there before its gradual 2002-2010 legalization still occupy the co-op and are active in its management and activities. After years of progressive renovations and improvements since its original occupation in 1988, the residents have planted a roof garden that provides food and herbs at no charge to about 32 inhabitants of 18 apartments inside the building. The farm is entirely volunteer run and operated by its residents. 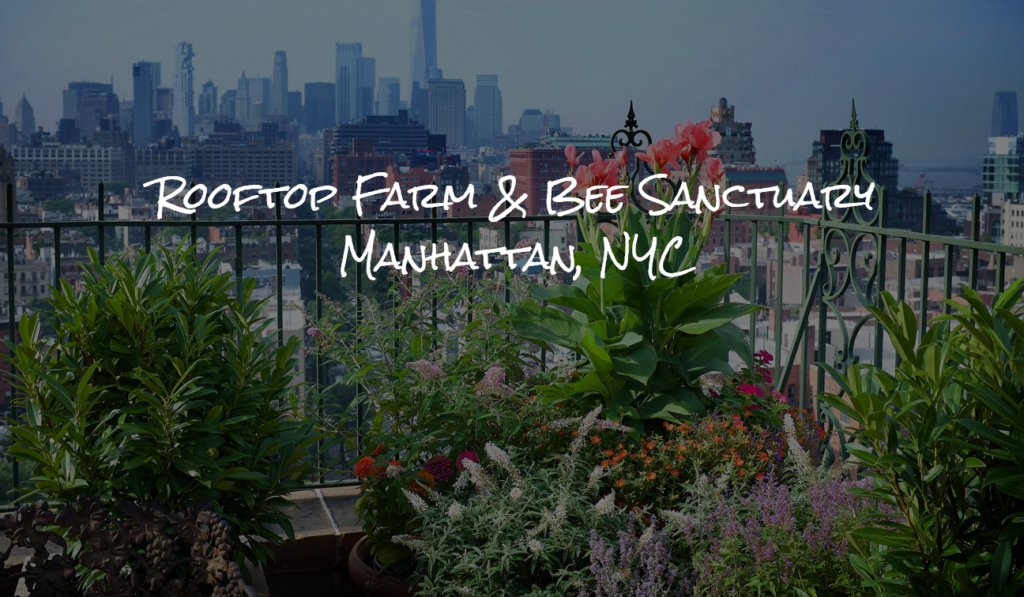 Not to be outdone by the progress of its East Village neighbors, the West Village is joining the movement. We were recently invited to a rooftop farm for a Harvest Party on a beautiful block near Abingdon Square. Virginia Davies and her family are forging the path for West Villagers to embrace the urban farming movement here. Their farm, atop a large residential building, is, they are told, currently the largest rooftop farm in all of Manhattan. Virginia’s mission is to plant the seeds for the next generation of urban dwellers and expanding the vision for rooftop permaculture in NYC.  Beginning as an adventure in gardening and a farm-to-table education, as well as family bonding time, the endeavor has turned into a passion to inspire the next wave of rooftop farming and community building and a hope for a sustainable future here in our city. 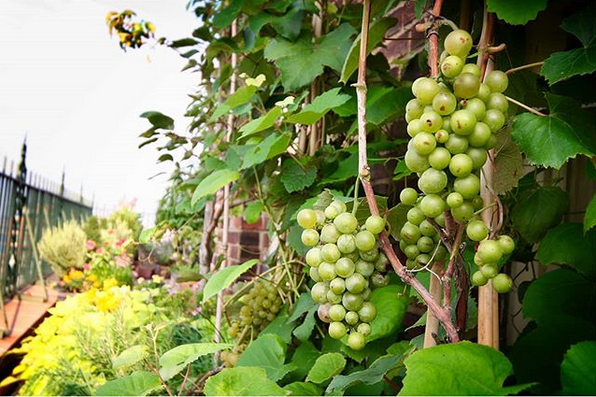 Virginia’s four and a half year old granddaughter, Livie, is her partner in the venture. It is one of the family’s core beliefs that children today need to understand food, and as they are urban dwellers, they need to be more connected to the earth. So they embarked on a quest to make an urban farm dream a reality on their West Village terrace.  What is really cool is that everything produced at the farm is given back to the community in hope of a more sustainable future, a mission to inspire the next wave of rooftop farming and community building in NYC.

Truly, the magical world of urban farming is something to behold! Virginia and Livie’s rooftop farm is lined with peach trees, apple trees, strawberries, tomatoes, squash, cucumbers, beans and even a watermelon and some corn, thanks to the help of expert and agriculturist, Leonard Hagg, who helped Virginia and Livie to make the farm. 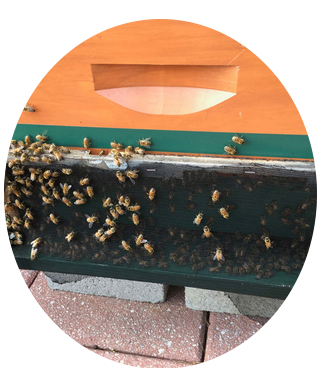 But one of the most magical things about the rooftop farm are the bees!  The Best Bees Company, whose mission is to expand the honey bee population whilst improving the overall health and safety of bees nationwide, provides services for the apiary that lives in concert with the farm on the rooftop. Noah Wilson Rich, Ph.D. started The Best Bees Company as a means to raise funding for scientific research to improve honey bee health. They now offer beekeeping services throughout southern New England, New York City, Pittsburgh, Washington D.C., Los Angeles, Chicago, Denver, Seattle, Portland, San Francisco and Salt Lake City. It is a full-service beekeeping operation and they deliver, install and manage beehives for residences and businesses.

The Best Bees Company envisions a healthier and safer world for the bee community.  All of the hives contribute data points through their affiliated 501(c)3 nonprofit to analyze and improve bee health.  Very, very cool.

Now on to the schools!

The Fifth Street Farm is a collaborative educational project serving three NYC public schools on the rooftop of the Robert Simon Complex in the East Village.  Fifth Street Farm was created as a tool for providing the inner-city children with a greater awareness and understanding of the natural world and the role that plants play in the food web.  The rooftop garden allows students from pre-K though 8th grade to experience the benefits and pleasures of growing and eating fresh, whole, sustainable foods. Hands-on engagement with plants from seed to table gives students the ability to make the connection between fresh, unprocessed foods with healthy eating choices.  The farm engages the students to learn about and implement sustainable food growing practices, such as ways to reduce storm-water runoff and reducing the urban heat island effect.  The project provides learning opportunities in science and math through the study of natural systems, climate change, and environmental sustainability.

Grace Church School in the East Village is a founding member of the Green Schools Alliance and has been ranked among the top JK-12 schools by the EPA in participation in the Green Power Partnership.

And last but not least, The Restaurants!

Sure, New York has more concrete than crops. But when it comes to sourcing produce, locally-grown just keeps getting more local. And of course we have all heard of farm to table, but here in New York, we actually have several restaurants that offer us ROOF TO TABLE!

Rosemary’s in the West Village at 18 Greenwich Avenue grows their own Herbs—basil, mint, thyme, sage, and, yes, rosemary—which are the most prolific crops in the 1,000-square-foot rooftop garden of this beloved West Village restaurant. “During the summer, we can get 100 percent of the basil that we need for the restaurant from the roof,” says executive chef Wade Moises. “But if we wanted to only use rooftop rosemary, then that’s all that we would be able to grow because we use so much in the kitchen.” The Garganelle Primavera is garnished with a roof-only herb salad, and other items on the plate, like radishes, lettuces, and long beans, will have also come from above as well. 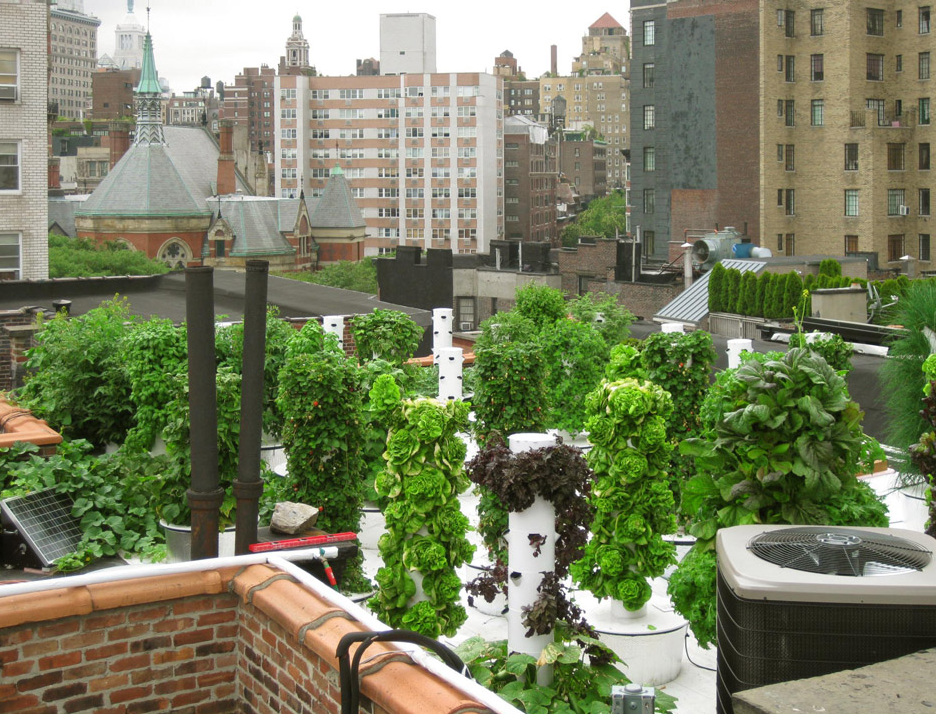 The rooftop at Bell Book and Candle may not be huge, but they make up for it with tower gardens.  The food at BB&C centers on local, organic, sustainable and overall responsible procurement. The menu cycles are seasonal and heavily influenced on production from the aeroponic roof-top tower garden.

Finding inspiration in the regions of America and focusing on the contemporary aspect and eclecticism of the melting pot, BB&C’s food strives for an element of originality and individualism.

Some of the delightful treats they grow on the roof are:

Sage, Chive, Chervil, Cilantro, Dill, Genovese Basil, Opal Basil, Italian and Flat Leaf Parsley, Spearmint, Rosemary, 4 varieties of Nasturtium, Cheddar Cauliflower, Purple Tomatillo, Tomatillo, Japanese and Kermit Eggplant, 2 varieties of Arugula, 4 varieties of Cherry Tomato, Great White Tomato, Bibb Lettuce, Red Oak Leaf, Red Romaine, Green Romaine, Lola Rosa, Frisee, Green Crisp, Poblano Pepper, and Fennel.
Bell Book and Candle is located at 141 West 10th Street.
We are hoping to see you all out and about looking up to find the gardens and, hopefully, being inspired to grow one of your own.  No matter how small or large your living space, something tasty can grow there!