That village, the labyrinth of streets and lanes… into which those restless individuals seeking political or social or cultural change began settling after 1910 consisted mostly of buildings grown dingy since prosperous New Yorkers had begun moving northward…Marie was one of those newcomers.

Born and raised in rural Romania, Marie Marchand came to New York like so many other immigrants, initially taking on seamstress work in a sweatshop.  But as she grew her community, her home became a gathering space for all she met.  She then took the risk of striking out into the world of hospitality, in 1914 opening Romany Marie’s.  This made her a Greenwich Village legend.

Marie’s first bistro at 133 Washington Place was an extension of her home. It was full of anarchists, activists, artists, writers, thinkers, and interlocutors who engaged and debated, and who defined the Village’s bohemianism.  This was the first of many of Romany Marie’s locations over forty years of keeping Village establishments.

Marie Marchand was born on May 17, 1885, in a small town in central Romania to Lupu Yuster, a nomad Roma, and Esther Rosen, a Romanian Jew. Marie came to New York in 1901 at age 16. She got involved politically and learned English in the process by attending anarchist meetings and rallies hosted by the likes of Emma Goldman. 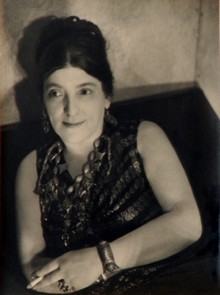 Marie has been described as attractive, unusual, lively, generous, and legendary. At her establishments in the Village, it was understood that meals would be given to those who needed them whether or not they could pay. Marie was described as prominent in anarchist and socialist circles by The New York Times as late as 1915. Marie called her restaurant Romany Marie’s; the restaurant changed addresses a total of 10 times in 30-plus years. Marie always lived in those buildings, maintaining the feeling of home at each location.

At 20 Christopher Street, Romany Marie sold bowls of 35-cent Romanian chorba stew between 1915-1923. 20 Christopher Street is half of an identical pair of Federal-style buildings dating to 1827, the ground floor of which is still used as a restaurant space. Romany Marie’s also spent time at 15 Minetta Street, 49 Grove Street, 42 West 8th Street, 64 Washington Square South at Thompson Street (which no longer exists), and the basement of the Hotel Brevoort at Fifth Avenue and 8th Street, among others.

Under Marie’s ownership, the restaurant’s walls were full of local art, which was considered an acceptable barter for a meal. “Serious people, writers, artists, whatever, could eat free if they needed to, without embarrassment,” Marie is quoted as saying in her biography, Romany Marie: The Queen of Greenwich Village (all quotes here are from the book). “It was not a restaurant; it was a center.”

The Art and the Heart

Romany Marie’s free spirit proprietorship made all the locations of her restaurant more like the salons that were found all over the Village at this time, ripe with creation and possibility. Any number of Greenwich Village notables could be found in her establishment, working quietly on their next novel or debating the finer points of life with friends and strangers.

Edna St. Vincent Millay was a regular and often asked Marie to interpret the grounds in her cups of Turkish coffee. It’s also said that Millay wrote her famous “my candle burns at both ends” line there. Stuart Davis, a modernist painter, was a daily patron. Artist John Sloan etched an interior view of the Christopher Street location, as well as a portrait of Marie herself (both above), which is in the permanent collection of the Whitney Museum of American Art. Marie reflected that she likely kept Eugene O’Neill alive in 1916 and 1917 by making sure he was fed. The list goes on and on. 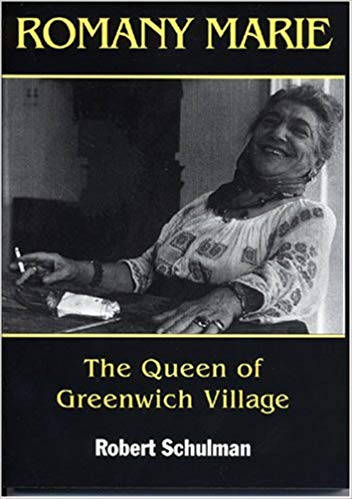 Romany Marie’s time as a restauranteur was not without struggle. The generosity and radical spirit that Marie brought to life and business were directly at odds, unfortunately, with paying rent. Benefits were held, moves were supported communally, and Marie somehow kept feeding the people. She would joke that her patrons and community members would remember when they wrote a certain poem, novel, or composition based on whether they were in Marie’s Washington Square, or the one on Christopher Street.

They would come to me with their enthusiasm, or with their discord–Marie, why has this been such a bad day for me? Marie, why can’t I find a belief in mankind? Perhaps I could be a source for such people because, unlike a recording machine, I would react with my whole being, for I, too, was in the act of creation and that was the real food.