Village Preservation has so many online resources available about the history of our area. But did you know that we now also have an incredible archive available online of the history of preservation efforts in our neighborhoods? This archive contains materials from organizations and individuals involved in historic preservation efforts, particularly those connected to Greenwich Village, the East Village, and NoHo from the 1960s through the 1980s.

This archive is divided into three sections, each with its own pieces of our preservation history.

Otis Pratt Pearsall is an attorney and Brooklyn Heights resident who spearheaded that neighborhood’s successful effort to become New York City’s first historic (landmark) district in 1965. This archive includes correspondence and other information from 1965-68 about Greenwich Village prior to the designation of the Greenwich Village Historic District in 1969.

What comes to light in looking at this collection are the trials and tribulations that the newly formed Landmarks Preservation Commission was working through as well as the obstacles that preservationists faced in trying to get the Greenwich Village Historic District designated. Here is a letter from Mr. Pearsall to Mrs. Ruth Wittenberg, Chairman of the Greenwich Village Historic District Council: 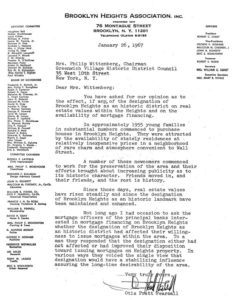 This archive includes over 700 pages of meeting minutes, notices, correspondence, newsletters, and related articles from between 1961 and 1995. It documents decades of preservation battles, including for the creation of West Village Houses, the only built project in which Jane Jacobs had a design hand, and against the construction of Westway.

This collection contains the earliest printed newsletters of Village Preservation after its founding in the 1980s and through the 1980s, when it was known as the Greenwich Village Trust and then the Greenwich Village Society for Historic Preservation.  Among other issues, these early newsletters focus on efforts to research and preserve the non-landmarked sections of the Greenwich Village waterfront, archaeological digs at Sheridan Square, the competition to design a wrought-iron fence around the Jefferson Market Garden, and the early efforts to protect and pursue landmark designation for the Meatpacking District.

This is only the tip of the iceberg of the wealth of information that this collection holds. And if you want a complete picture of preservation efforts over the years that span even before the inception of the Landmarks Law in 1965, I also recommend looking at our Oral History Collection of Preservation Pioneers.