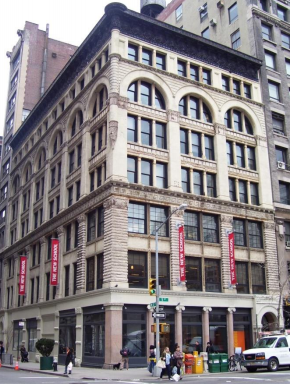 This almost perfectly intact late 19th-century masonry structure is not only an outstanding example of the Romanesque Revival style, but its occupancy over the years reflects the area’s prominent connection to the publishing industry, left-wing political movements, and perhaps most surprisingly, the tobacco industry. Nevertheless, despite requests by Village Preservation to landmark this and surrounding buildings as part of a historic district, the NYC Landmarks Preservation Commission has failed to do so. Today, we take a closer look at 72 Fifth Avenue, and ask: why isn’t this landmarked? 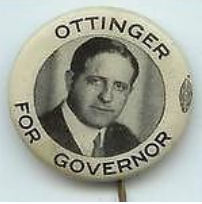 In 1893 Marx and Moses Ottinger (whose son, Albert Ottinger, would become the first Jewish major party candidate for Governor of New York in 1928, losing by less than 1% of the vote to Franklin Roosevelt) and Isidore and Max Korn, built the new headquarters and a store for the Appleton & Company publishers at 72 Fifth Avenue. At the end of the 19th century, the area just south of 14th Street was developing into a vital center for the publishing world, making this site the perfect new home for the publishing company. Here as in many other buildings in this area, this type of use would continue well into the 20th century. 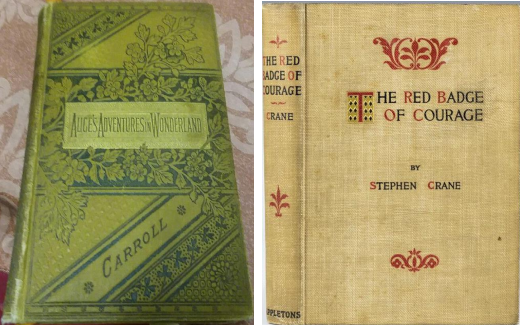 Appleton & Company was founded in 1825 by Daniel Appleton. By the time 72 Fifth Avenue was constructed, it was one of the leading and fastest-growing publishers in the country. The company also distinguished itself with the prestigious writers and works it published, including Edith Wharton, Henry James, Charles Darwin, and William Cullen Bryant. They published the first U.S. edition of Lewis Carroll’s Alice’s Adventures in Wonderland, and during the time they operated out of 72 Fifth Avenue published Stephen Crane’s The Red Badge of Courage, considered one of the most important American novels and the work which made Crane (who lived nearby just south of Washington Square) a household name.

The building was designed by Cleverdon & Putzel, architects of several of the many impressive buildings in this area. It is a stunning example of the Romanesque Revival style. To this day, it retains almost all of its exterior façade detail, including at the ground floor — a rare occurrence in this area especially given the age of the building. 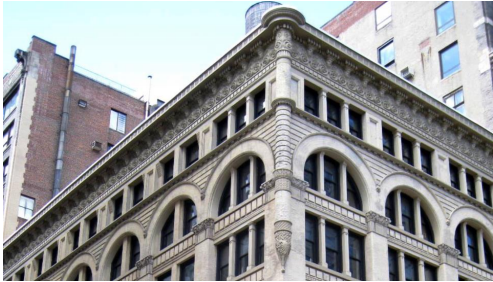 The whole design is a seamless mix of contradictory elements: rough and smooth, simple and ornate, uniform and free-form. At the front façade, pink granite engaged columns line the storefront along Fifth Avenue with ionic capitals. Spanning the second and third levels are unusual piers of stacked quarry-faced stones lending a sense of solidity to the base of the structure. Almost in contrast to the piers are their finely ornamented capitals all supporting a simple classical cornice with Greek keys running the widths of both facades. Romanesque arches which are two bays wide at the West 13th Street façade and three bays wide at the corner and Fifth Avenue façade span the sixth floor resting on piers of smooth ashlar stone that run the height of the fourth and fifth floors. At the top floor small windows are placed in accordance with the rhythm of the fenestration below and the cornice at the top is highly ornamented and features unusual brackets with women’s faces. At the corner of the building is slender finial at the top three stories. 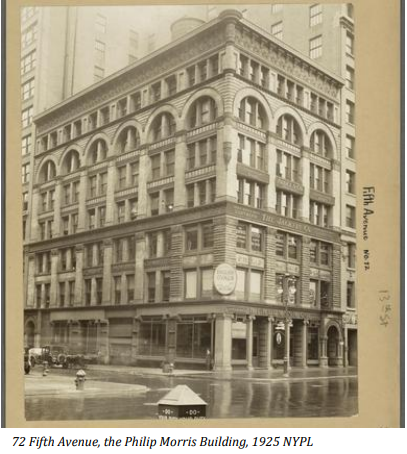 In 1896 Louis L. Lorillard (1849-1910) purchased the building. He was one of four sons of Pierre Lorillard III (1796- 1867), real estate speculator and heir to the New York-based P. Lorillard Tobacco Company. Louis was touted as one of the wealthiest young men in New York upon his father’s death.

By 1902, Appleton & Company grew too big for the space and moved out of 72 Fifth Avenue, allowing smaller tenants to take its place. In 1915 Philip Morris & Co. Ltd. leased the building, which became known as the Philip Morris building. Philip Morris would eventually become the largest tobacco seller in the United States. 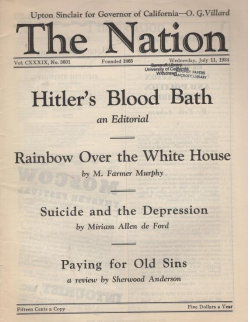 In 1946 the building would return to its roots when the educational publishing firm of Ginn & Co. purchased it. The firm had been nearby at 70 Fifth Avenue for the previous sixty years. Other publishers joined Ginn & Co. including Longman, Inc. and Penguin Books by 1976. In 1979 publisher Hamilton Fish moved his magazine The Nation, the oldest continuously published weekly in the country, to the building. First founded in 1865, The Nation covered culture and politics, and called itself “the flagship of the left.” The choice of this location was unsurprising given the area’s history not only as a center of publishing but of left-wing political activity.

The magnificent architectural design of 72 Fifth Avenue paired with the vast amount of history connected to the building should make it, as well as much of its surroundings, a clear choice for landmarking or historic district designation. There are very few buildings without landmark protections that survive and stay in as good condition as the Appleton & Co building. According to Daytonian in Manhattan, “Today the building is home to the New School University’s Milano Graduate School of Management and Urban Policy.  Although the fantastic pointed finial on the roof long ago disappeared, the building looks much as it did when Appleton & Co. first opened its doors in June 1894.” It is nothing short of remarkable a structure like this one is still extant. This is why Village Preservation has presented all this information to the Landmarks Preservation Commission about this building and the surrounding area, but thus far the Landmarks Preservation Commission has refused to act. 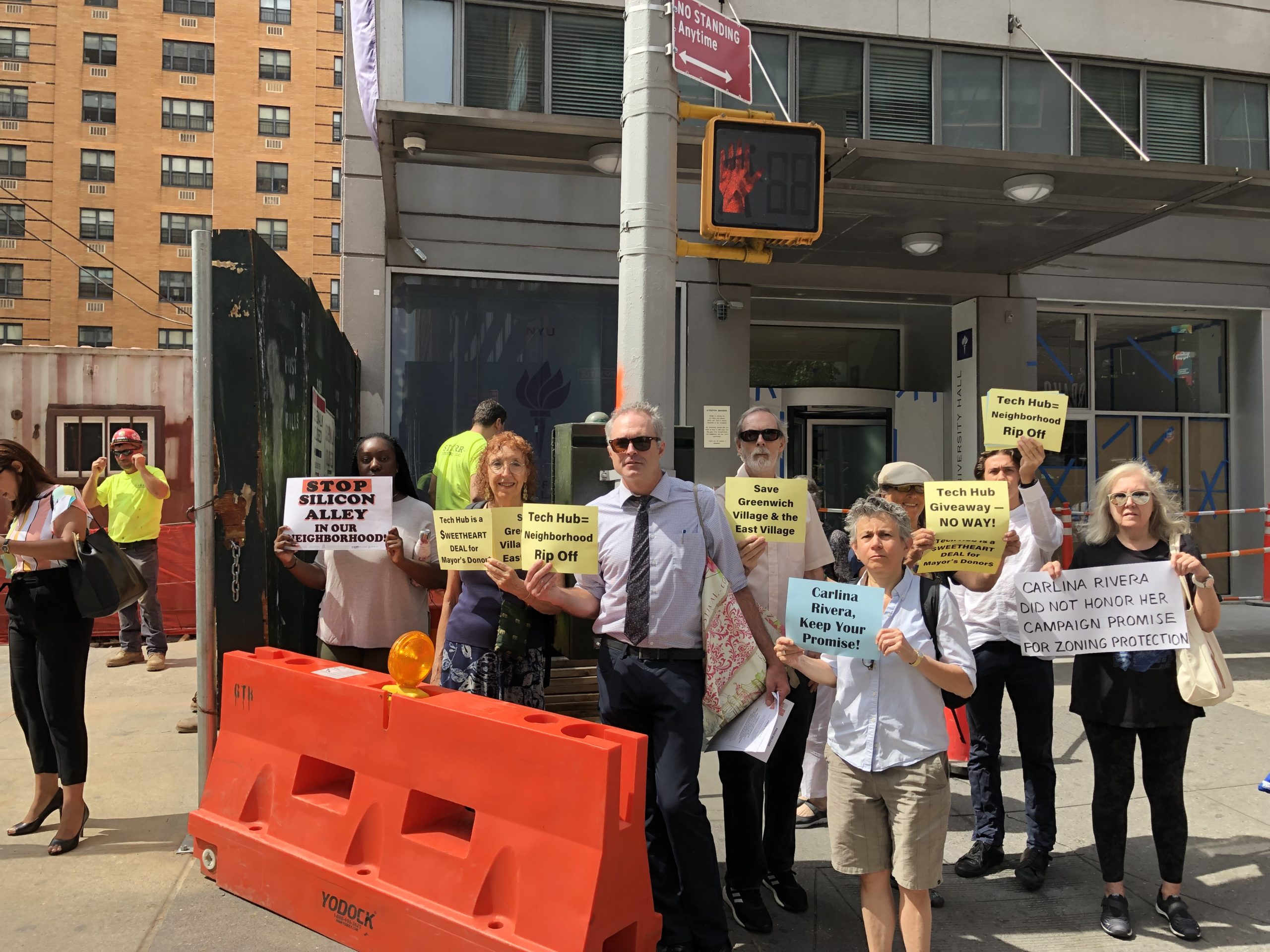 Greenwich Village and the East Village south of Union Square, including 72 Fifth Avenue and its environs, face tremendous development pressure right now due to a lack of zoning and landmark protections, and city policies encouraging the replacement of low-to-mid-rise buildings, often historic and residential in nature, with high-rise commercial development.  This has been exacerbated by the approval of the Mayor’s 14th Street Tech Hub last year by City Council at the behest of Councilmember Carlina Rivera.

We are seeking landmark designation for this and about 200 surrounding buildings on a dozen blocks. Join us in urging the city to protect this vital history and neighborhood NOW – click here.