The Queensboro Bridge, built in 1909, was the first bridge linking Queens to Manhattan. Directly connecting Midtown Manhattan to booming Long Island City and used by millions of commuters each year, this amazing and still free bridge is also an architectural and engineering marvel. While perhaps not quite as beloved as the Brooklyn Bridge, it’s certainly near and dear to the hearts of many New Yorkers, and has developed its own revered spot in the popular consciousness over the years. There may be other quicker or more convenient ways to get across the East River, but many chose to drive, bike, walk or run across the bridge because of the magnificent views it affords of the East River, Roosevelt Island, and Manhattan and the beautiful iron latticework with which it surrounds commuters. 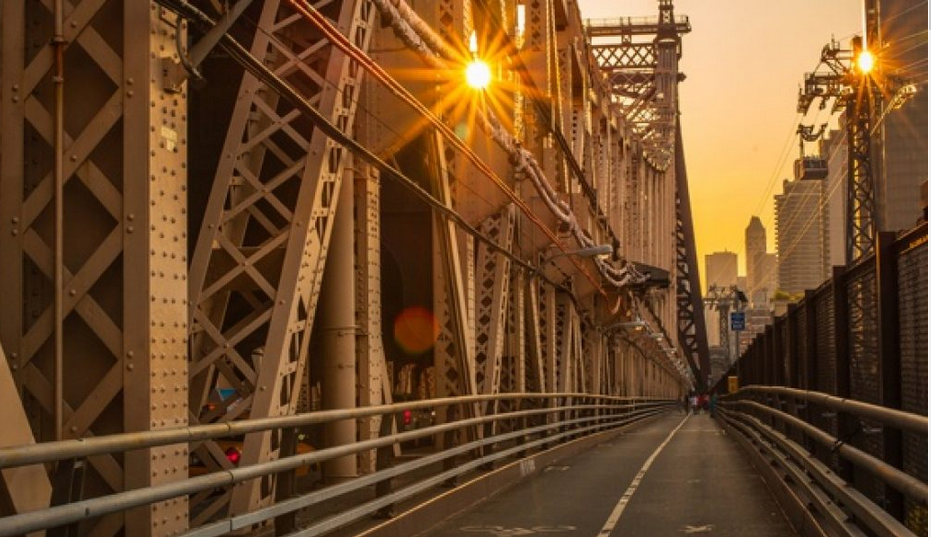 While the Queensboro Bridge goes nowhere near the neighborhood, it does in fact owe a fair share of its mythic status to Greenwich Village.

Designed by engineer Gustav Lindenthal and architect Henry Hornbostel, it is the “longest of the East River Bridges, with an overall length of 7,449 feet,” according to the New York City Department of Transportation. The construction of the Queensboro Bridge began in 1901, just after Queens became part of New York City, and the bridge opened to traffic in March 30, 1909, and pedestrians on June 18, 1909. In March 2009, the New York City Bridge Centennial Commission sponsored events marking the centennial of the bridge’s opening. The bridge was also designated as a National Historic Civil Engineering Landmark by the American Society of Civil Engineers during the year of its centennial anniversary. It was designated an official New York City landmark in 1974, and added to the National Register of Historic Places in 1978. 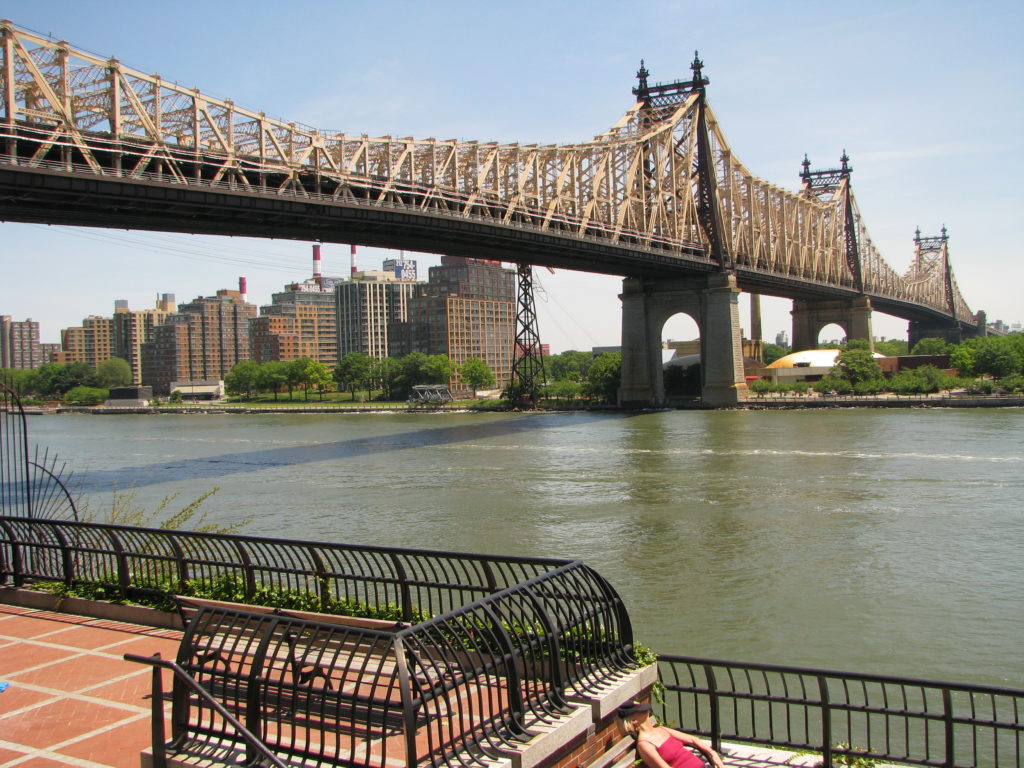 Somewhat unusually, the bridge actually consists of three separate spans (the space between the support towers on a bridge) — one between Manhattan and Roosevelt Island, one spanning Roosevelt Island, and one connecting Roosevelt Island to Queens (by contrast, the Brooklyn, Manhattan, George Washington, and Verrazano Narrows bridges are all single-span bridges).  When built, it was the longest cantilever span bridge in North America.  Lindenthal also designed the Hell Gate Bridge further up the East River in 1917, as well as many of Pittsburgh’s bridges.  Interestingly Hornbostel also did a great deal of work in Pittsburgh, designing buildings for Carnegie Mellon and various churches, synagogues, and government bodies in the Steel City.  Like Lindenthal, he was also responsible for another nearby East River span, this one just to the south — the Williamsburg Bridge.  Sometimes called ‘Hornbostel’s Erector Set’ for its unvarnished filigree of steel, nuts, and bolts, while initially derided by some, the Queensboro Bridge has entered the pantheon of iconic New York City bridges over the years, in so small part due to its many appearances in popular culture.

And that’s where the Greenwich Village connection comes in.  Perhaps no one has burnished the legendary status of the bridge than the folk/rock/pop duo Simon and Garfunkel — two native sons of Queens who, like the bridge, made the journey across the East River to Manhattan, earning a name for themselves in the clubs of Greenwich Village. And the 59th Street Bridge features prominently in the oeuvre of this pair. 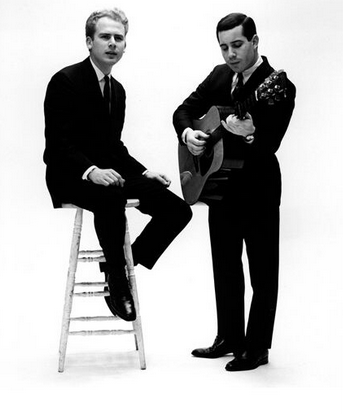 Paul Simon and Art Garfunkel both began their musical careers in Queens.  They met in high school there and formed a band called Tom and Jerry.  Although they didn’t find much success as Tom and Jerry, the duo later began to gain a following after changing their name to Simon & Garfunkel. 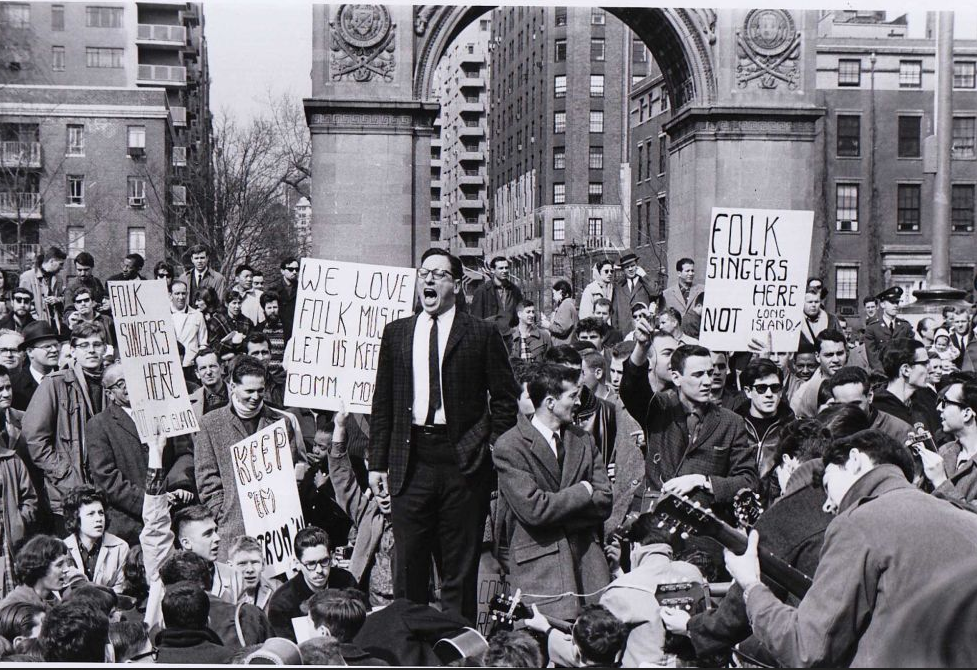 Musical Roots in the Village

The early 60s saw a folk revival sweep New York City. Its epicenter was, of course, Greenwich Village. A new breed of singers and songwriters flocked to the Village, bringing with them a fresh approach to the craft of songwriting. Simon, who studied English literature, was influenced by this new breed of folk artists. Simon and Garfunkel began to play the folk scene in the early 1960s while both were still in college. Initially they still billed themselves as Tom and Jerry. But after meeting Tom Wilson from Columbia Records following a gig at Gerde’s Folk City, their fate changed and they and began to use their real names while cutting their teeth in Greenwich Village clubs. 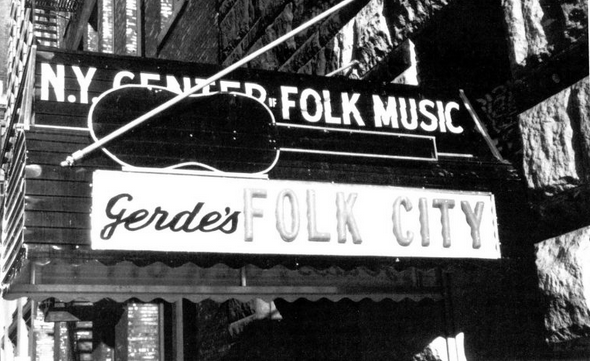 Simon and Garfunkel pretty quickly inked a deal with Columbia Records after their launch on the folk scene, and released their first album, Wednesday Morning, 3 AM, which includes the haunting ballad Bleecker Street, often cited as one of Simon and Garfunkel’s most overlooked gems. The song, written by Simon, is a searing example of the kind of pure folk they were crafting in the Village alongside other folk greats.  It is about the street we all know and love that runs like a vein through the neighborhood.  The duo would often play to crowded houses on Bleecker Street during the 60s folk music movement. It is an intellectual song , full of symbolism and some intricate guitar patterns and an ode to the street that was the lifeblood of their nascent career.

The initial response to the album was less than enthusiastic, however. But another of the tracks, “The Sound of Silence,” got some decent airplay and traction on the radio. Sensing a potential hit, the song got a subsequent rock and roll treatment. They re-mastered it, dubbing a rock and roll rhythm section over the original acoustic track, and then issued it as a single. The new strategy worked and the new version of “The Sound of Silence” became a big hit. And the rest, as they say, is history.

And…… A Bridge Back to That Famous Bridge

The song 59th Street Bridge (Feelin’ Groovy) appeared in 1966 on the duo’s third studio album, Parsley, Sage, Rosemary, and Thyme.  It refers to the path that connects their native Queens with Manhattan over the East River.  The bridge was probably a fairly physical reminder of their personal connections between the lower Manhattan that cultivated their careers and their childhood homes.  Paul Simon wrote the song while walking over the bridge early one morning. He said:

“I spent most of the year 1965 living in England, and at the end of that year in December, I came back to the United States,…and I was writing very depressed-type songs until around June of last year. I started to swing out of it, I was getting into a good mood, and I remember coming home in the morning about 6 o’clock over the 59th Street Bridge in New York, and it was such a groovy day really, a good one, and it was one of those times when you know you won’t be tired for about an hour, a sort of a good hanging time, so I started to write a song that later became the 59th Street Bridge Song or Feelin’ Groovy.” 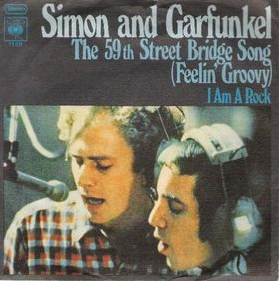 (Additional “Fun Fact”: This is one of the first known uses of the word “Groovy” in a popular song. It gave the songwriters Carole Bayer Sager and Toni Wine the inspiration for writing “A Groovy Kind of Love.” )

Other Brushes With Fame

Of course the Simon and Garfunkle song is not the Queensboro Bridge’s only brush with cultural fame with a Village connection. Greenwich Village writer E.B. White mentions the bridge in Charlotte’s Web, when Charlotte tells Wilbur that the bridge took eight years to build (true!) but that she can build a web in a night.  Village denizen F. Scott Fitzgerald in his novel The Great Gatsby uses the bridge as setting for Gatsby and Nick Carraway’s journey from Long Island to Manhattan.  Nick remarks “the city seen from the Queensboro Bridge is always the city seen for the first time, in its first wild promise of all the mystery and the beauty in the world.”  And another literary denizen of Greenwich Village, Truman Capote, uses the bridge as backdrop for the climax of his novel Summer Crossing when the main character commits suicide and kills three people by crashing her car into the bridge.

And of course the bridge is immortalized in the opening credits of the Greenwich Village-set TV show Taxi, which is more or less a long, slow journey through the bridge’s steelwork culminating in a view of the Manhattan skyline and the glint of the sun, encapsulating the show’s theme of bridging the chasm between the workaday world and the world of dreams and aspirations, which the utilitarian but lyrical bridge in many ways does. 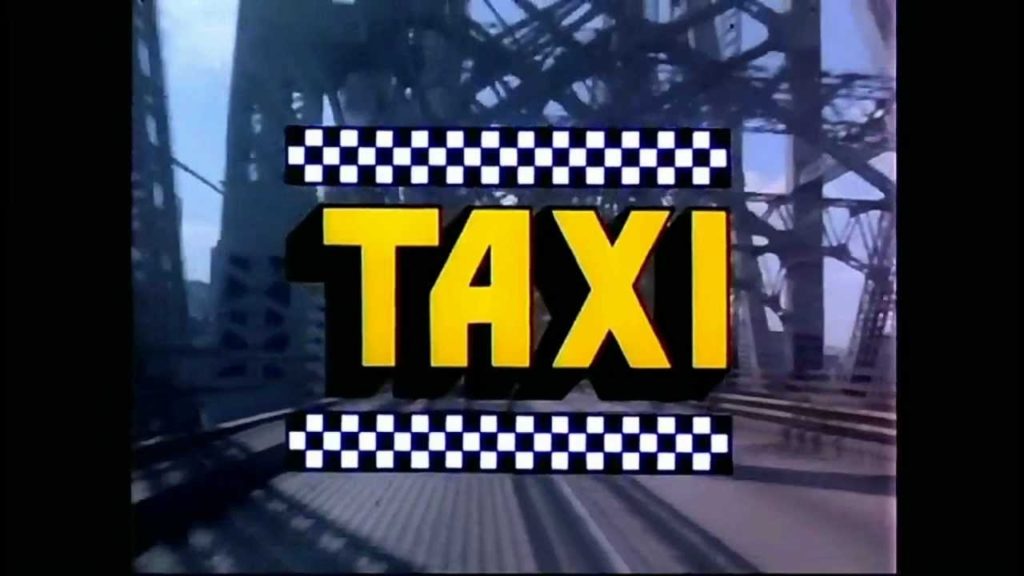 The bridge does now also bear the name of a Villager, even if no one uses it.  In 2011, Mayor Michael Bloomberg decided to commemorate long-time Greenwich Villager Ed Koch’s 86th birthday by making the bridge’s official name the Ed Koch Queensboro Bridge. While the name may appear on some signs and maps, no New Yorker calls it anything but the 59th Street Bridge or the Queensboro Bridge — the names made famous by countless writers, musicians, and filmmakers over the past one hundred ten years, more than a few of them from Greenwich Village.

A final note: there’s an additional point that might seem like a connection between the bridge and Greenwich Village but isn’t, and is only an interesting coincidence.  The Queensboro Bridge was originally called the Blackwell’s Island Bridge; Blackwell’s Island was the prior name for Roosevelt Island (which later became Welfare Island, and then Roosevelt Island). Due to the concentration of hospitals on island, you might think it was named for 19th century healthcare pioneer and first woman doctor in America Elizabeth Blackwell, who lived and opened her first office, school, clinic and hospital in Greenwich Village and the East Village.  It’s not (though the presence of hospitals is why it was later renamed Welfare Island). It was actually named for Robert Blackwell, an early resident and farmer of the island. And while the ultimate namesake for the island which the bridge traverses, Franklin Delano Roosevelt, never lived in Greenwich Village, his wife Eleanor did for decades starting in the 1940s until her death, and his family had been large property owners and developers in Greenwich Village in the 19th century.

One response to “Beyond the Village and Back: The Queensboro Bridge”