Many were known for breaking new ground in terms of style, technique, subject matter, or social context.  One, noteworthily, did all of the above.

Paul Cadmus was born on December 17, 1904 in New York City to a father who worked as a commercial lithographer and a mother who illustrated children’s books. He entered the National Academy of Design at the age of 15. In 1928, Cadmus got a job working as an illustrator for a New York advertising agency and simultaneously took life-drawing classes at the Art Students League, where he met Jared French, who encouraged him to quit making commercial art. The two became lovers and traveled to Europe from 1931 until 1932, living in a Mallorcan fishing village and learning and refining the egg tempera technique for which Cadmus became known. When the two returned home, Cadmus became one of the first artists to work on a New Deal Art program, painting post office murals. During the 1930s, he lived at 54 Morton Street, and after 1934 he and French lived together at 5 St. Luke’s Place.

In 1934, Cadmus was caught up in what became a national scandal when his painting, The Fleet’s In!, was featured in the Washington Evening Star as part of an article about the art exhibit it was to be included at Washington’s Corcoran Gallery. The painting depicted uniformed sailors, prostitutes, and a gay pick-up scene. Members of the Navy were outraged, including retired naval Admiral Hugh Rodman who demanded it be withdrawn from the gallery. The painting was removed by Henry L. Roosevelt, the Assistant Secretary of the Navy at the time, who kept it at this house until his death in 1936; ironically it eventually found a home at the Naval Historical Center.

This controversy and the ensuing publicity pushed Cadmus into the spotlight and effectively launched his career. Throughout it, Cadmus explored a mix of satire, magical realism, eroticism, and homoeroticism in his paintings, splitting from the art world after the rise of abstract expressionism in the 1940s. He was a meticulous and stylistically consistent artist who took his time completing each of his individual works, creating an average of two paintings a year. Cadmus died just before his 95th birthday in 1999.

To learn more about other artists from the Greenwich Village Historic District and to see our other tours, go to www.gvshp.org/GVHD50tour. 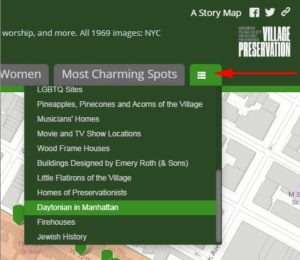 Our current tours include: