53 East 10th Street is a 6-story neo-classical style loft building constructed in 1899 by Schickel & Ditmars for Samuel Sachs. Originally intended to house producers of goods and wares, by the 1960s it was producing an entirely different product.  It became the home of the highly sought-after Apostolic Recording Studios, the first 12-track recording studio in the country. The Grateful Dead, Frank Zappa and the Mothers of Invention, and the Fugs, among others, made and recorded beautiful music there. 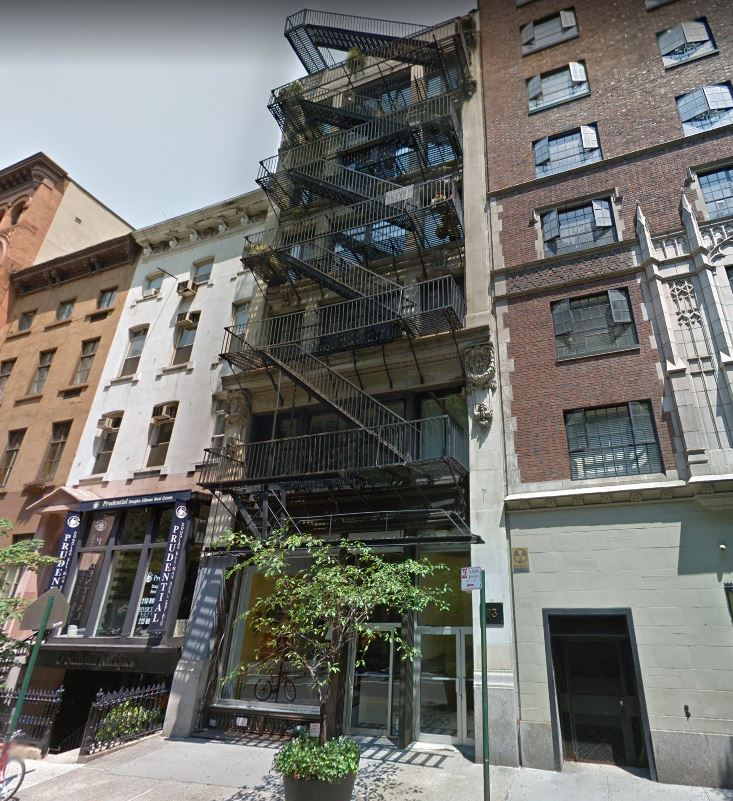 The German-born Schickel was the architect of many other notable buildings, including the German Library and Dispensary at 135-37 Second Avenue and the Church of St. Ignatius Loyola at 980 Park Avenue.  Slightly farther afield, he was also the architect of the Cathedral Basilica of the Sacred Heart in Newark, N.J., one of the largest Gothic Cathedrals in the United States. Sachs, a successful fur manufacturer and importer, also developed the nearby 43-47 East 10th Street.

The one hundred twenty year old facade of the building is largely still intact, with ornate medallions framing the second story windows. The fire escapes, which both add a rhythm to the facade and obscure some of the elaborate ornament, dates to at least 1940, as they are visible in the tax photos from that year.

The building truly came into its own in the 1960s, however, with the arrival of Apostolic Studio.  The history of the studio, a favorite especially of Frank Zappa, was chronicled by its founder John Townley:

“First, I picked a downtown location, in the Village, as that’s where all the musicians were.  Be where you’re comfortable.  After all, only the execs were uptown.  It was a loft building on 10th St. near Broadway, with a hand-operated freight elevator its primary access, one where the elevator had no walls and worked by pulling a cable to make it start and stop. That was a golden opening opportunity — our artist/”elevator man” Nicky Osborn soon had the entire darkened six-story shaft detailed in black-light psychedelic murals, and his personal welcome in full Viking costume definitely made a serious start on the way up.  Way up.  We often wondered what the clients of the very-tolerant baseball cap sales company on the 6th floor thought of it….”

Although Greenwich Village was a hotbed of creativity, the studio nevertheless faced some skepticism:

When we opened in the spring of ’67, everyone in “the biz” said we were crazy:  no one would come downtown, nobody needed twelve tracks, and our whole style was VERY un-businesslike…our name was Apostolic Studios, after our twelve tracks and unabashedly spiritual (though not particularly Christian) tilt, and clearly we were nuts.

Fortunately, success did find them at their downtown location:

Well, inside three months we were booked solid.  The Critters, Spanky And Our Gang, the Serendipity Singers, the Fugs, Rhinocerous, The Silver Apples, Kenny Rogers and the First Edition, Alan Ginsberg, the Grateful Dead and most of all Frank Zappa and the Mothers Of Invention found the qualities of user-friendly tech and musician-friendly ambiance to be just what the doctor ordered. 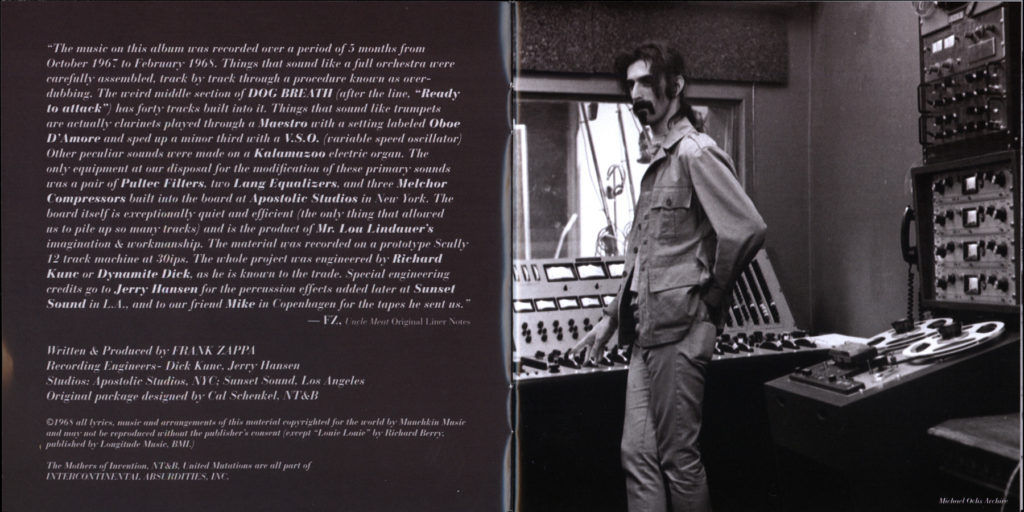 According to R Hoerer, Zappa’s album Uncle Meat was a project entirely produced at Apostolic Studios, a standout work of music that opened new horizons for Zappa:

By late 1967, Apostolic Studios had installed a prototype Scully 12-track recorder, and the overdubbing opportunities it afforded, together with a variable-speed oscillator used to modify the machine’s 30 ips tape speed, allowed for the creation of a completely new sound palette. —Chris Michie, “We Are The Mothers . . . And This Is What We Sound Like!“, Mix, January 1, 2003

Shortly after that, Electric Lady Studio was built for Jimi Hendrix, on nearby 8th Street. That landmarked building’s studio is still pumping out hits.

According to Light in the Attic Record’s Matt Sullivan, although many artists recorded at Apostolic, the studio’s greatest product was the sprawling double LP The Family of Apostolic. He called it “a utopian album inspired by global cultures ranging from Pakistani folk songs to Scottish traditional music and Chinese opera, it was made by a cast of 19, bonded by a desire to create “primitive performance art” from surrealist happenings. The idea of Apostolic was that the whole operation was a family,” says Townley. “Anybody could do anything if they participated.”

Village Preservation research has uncovered exciting and illuminating information about the significance of the area of Greenwich Village and the East Village south of Union Square, read it here, here, here, and here. With the increased pressure on the area from the construction on the 14th Street Tech Hub, the recent demolition of the St. Denis Hotel (80 E. 10th Street; 1855 – to be replaced by this) and the completion of the woefully out-of-scale tech office tower at 808 Broadway, the time is now for the city to act to protect this incredibly historically rich but endangered area.

Urge the City to Protect This Vital History and Neighborhood NOW – click here.