Village Preservation’s Civil Rights and Social Justice Map was launched on January 3, 2017. This online resource, which marks sites in our neighborhoods significant to the history of various civil rights and social justice movements, includes over 200 locations. We’re proud that the map has been viewed by over 100,000 people in its three short years of life, with its praises sung in BrickUnderground, Curbed, 6sqft, Viewing NYC, and The Architect’s Newspaper, among many others. History is never finite; sites and stories in our neighborhoods continue to surface with connections to civil rights movements for African-Americans, LGBTQ+ people, women, Hispanics, Asian-Americans, Jews, immigrants, and workers. This living map expands to hold them all. 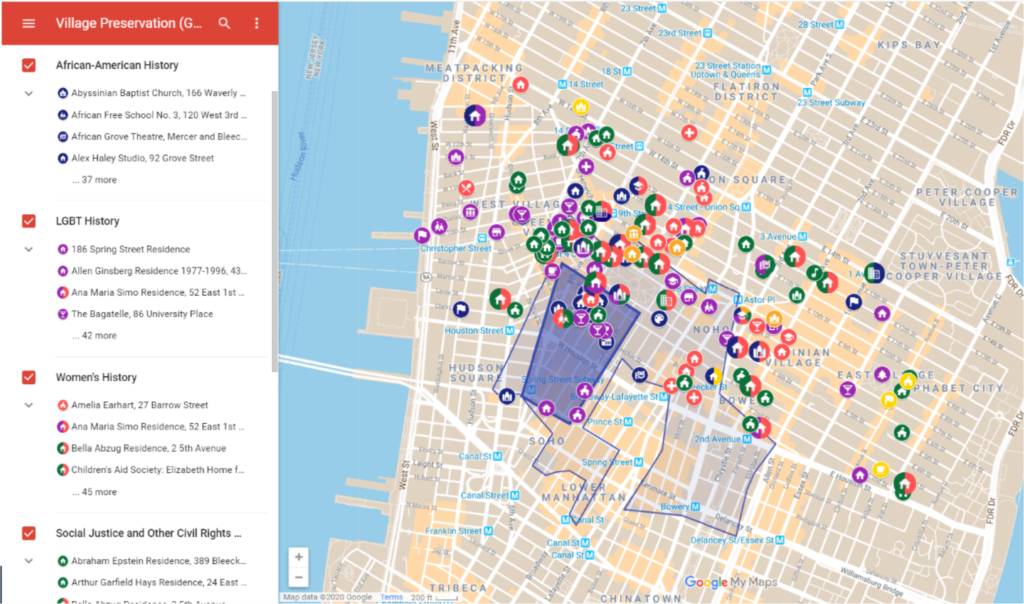 The Civil Rights and Social Justice Map is a place to learn more about familiar names, and discover new names, events, movements, and more. This includes the NAACP’s former headquarters at 69 Fifth Avenue; the Pyramid Club, which defined and birthed the East Village drag scene; radical anarchist and labor activist Emma Goldman’s residence, and so many more. Part of our aim is to create a record highlighting places or events which are now invisible – for example the entire neighborhood which was once called “Little Africa,” which was home to numerous churches and schools which have since moved uptown.

Newly visible are our most recent additions to the map, here for you to enjoy:

Marsha P Johnson and Sylvia Rivera, trans women activists who were involved in the Stonewall rebellions, went on to form S.T.A.R. in 1970. S.T.A.R. was for homeless and/or runaway trans people to build a community and live together in a supportive environment, away from the threat of violence.

Writer Anais Nin self-published some of her most important and seminal works out of the press she and her then-husband founded. Gemor Press functioned out of this building in the 1940s, as Nin was crafting a very personal literary output. Her writing was world-famous, and radical Nin’s explicit eroticism from her perspective as a woman. Village Preservation is pushing to have this building and scores of surrounding buildings landmarked.

In 1894 the headquarters of the New York City Woman Suffrage League moved here; the League was already 24 years old. The League was led by Lillie Devereux Blake on the state and city levels. At the time the League moved to 14th Street, New York State was about to hold a convention to revise its Constitution. The League’s pre-convention rally was held on May 7, 1894, and led by Elizabeth Cady Stanton at Cooper Union.

It was in the Village that Frances Perkins settled while studying at Columbia. As she moved around, Perkins cultivated many relationships here that would define her landmark career. Ultimately, Perkins was appointed President Franklin D. Roosevelt’s Secretary of Labor. 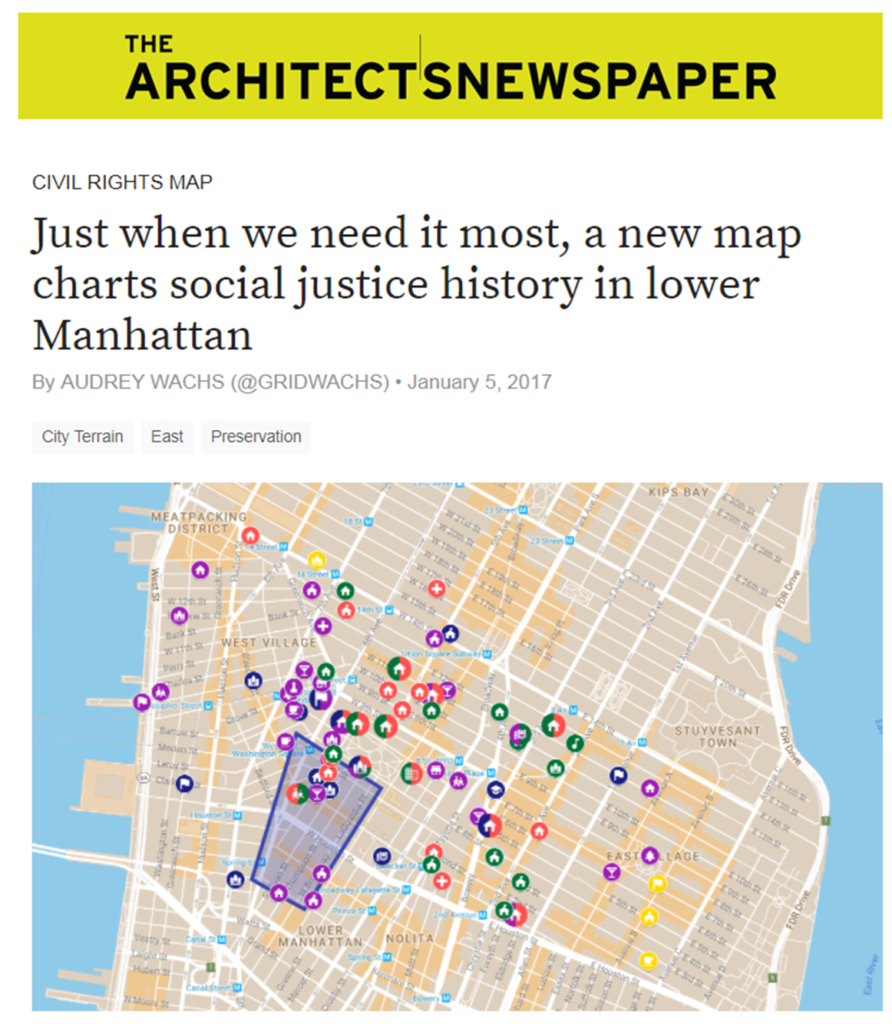 Village Preservation continues to document, celebrate, preserve and protect sites connected to civil rights and social justice. We do this through our historic plaque program (which has marked the homes of James Baldwin, Jean-Michel Basquiat, and Lorraine Hansberry; 27 Cooper Square, home of the Black Arts Movement; the site of the first meeting of Parents, Friends, and Families of Lesbians and Gays (PFLAG); and the Justus Schwab Saloon, a center of immigrant political, social, and labor organizing at the turn of the last century). We also advocate for landmark protections for sites of significance to the LGBT civil rights movement, like the Stonewall Inn, Julius’ Bar, or the Gay Activists Alliance Firehouse, or sites in the South and East Village connected to African-American, immigrant, and social justice history.

Do you know another site that should be included? Just email it and all information, along with sources to cite, to info@gvshp.org – the map is updated regularly.