“This is the most pretentious of the houses on our string, because my better judgment was over-balanced by my sentimentalism and my longing to do something better here than I ever did before”

You’d never know by looking at it now, but the intersection of East 5th St. and Avenue B in the East Village was once one of the most exciting corners in New York City show business.  It may have been demolished in 1968, but the Loew’s Avenue B Theater provided the surrounding East Village community with cinematic entertainment for more than 40 years.

Starting in the mid-19th century, the Lower East Side was home to a growing immigrant population,  particularly Jewish, Italian, German, and Hungarian immigrants. In many ways, Marcus Loew embodied that diverse experience.  The future theater magnate was born in 1870 and raised by recent Jewish Austrian immigrants in a Little Germany tenement building. After leaving school at age 9 to work a variety of odd jobs through his adolescent years, like assisting a map printer and peddling newspapers, he cultivated a career in penny arcades.

Eventually, he turned his attention to the theater business, which transformed him into one of the most successful businessmen in the country.  In the decade after its opening, Loew’s Avenue B Theater, which opened on January 8, 1913, was the Lower East Side’s most successful theater in Marcus Loew’s burgeoning cinematic empire, which would go on to include Loew’s, Inc. which merged with AMC Theatres in 2006, and Metro-Goldwyn-Mayer (MGM) studios.

By all accounts, Loew’s immense success never quite went to his head.  His early death at age 57 inspired an effusive and deeply mournful obituary in Variety that praised “the great conqueror of Broadway[‘s]” honorable business tactics as well as his generous spirit:

Show business is prostrated, in sackcloth and ashes.  And well it might be.  As in kneels beside the bier of Marcus Loew it mourns its most staggering and irreplaceable loss in history…

Unique in the annals of all trades, and strangest of all, in the hectic competition of theatricals, for once the biggest was the most beloved.

This theater must have been a deeply personal project for a sentimental man in his early career; after all, he built it on the same spot as the tenement building where he lived as a child.

When Loew described his new Avenue B theater as “pretentious” on its opening night in January of 1913, he meant that it was his most luxurious theatrical property to date.  Given that he already owned 17 theaters in New York City alone, this assessment must have been high praise indeed. He spent $800,000 on the construction of this building; today, that amount is the equivalent of nearly $21 million.

Designed by renowned architect Thomas W. Lamb, the building featured an elaborate façade of white terra cotta, curved with dramatic arches, large windows, and lots of decorative high relief work.  The prominent lion’s heads must have delighted visitors and distinguished it easily from the surrounding brick tenements. The front stage door often boasted the venue’s flair for showmanship with two-leveled poster displays promoting upcoming films and shows.  According to a cinema history archive, the theater would playfully replace a cardboard cutout of Douglas Fairbanks with a live impersonator to surprise passersby.

The interior of the theater featured just one screen and a capacity of 1750-1800 people.  Those crowds would have enjoyed the dramatic sounds of at least one large organ, installed in 1916, to accompany the shows they came to see.  While we have no photographs to show us what the interior might have looked like, Lamb was famous as an architect for his elaborate design tastes, both inside and out.

One of his most notable works is the United Palace, Lamb’s later and grander movie palace on West 175th Street, built in 1930.  Journalist David W. Dunlap attempts to encapsulate the lavish interior aesthetic of this huge venue by describing its “Byzantine-Romanesque-Indo-Hindu-Sino-Moorish-Persian-Eclectic-Rococo-Deco style.”  Perhaps early echoes of that eclectic visual adorned the walls of the Loews Avenue B.

In its early years, this venue primarily hosted vaudeville shows, a popular attraction at the time, while screening the occasional movie.  But as the film industry grew through the early 20th century, vaudeville began to fall out of fashion as audiences trended towards larger and more opulent movie palace venues like the United Palace.  When Loew acquired the Commodore Theater on nearby Second Avenue in 1927, the Avenue B venue began to lose this new local competition for moviegoers.

Unable to compete with multi-screen movie theaters with the space and variety to accommodate later-20th century tastes, the Loews Avenue B Theater declined in use for the next several decades before finally closing in 1958.  The theater stood vacant for a decade, in an increasing state of disrepair and despair, before it was finally demolished in 1968.  In his 1966 essay “Putting Daddy On,” author and journalist Tom Wolfe described the vacant theater as a “great rotting building with lions’ heads and shattered lepers’ windows-” a far cry from the most pretentious and luxurious theater that Marcus Loew owned.  It was demolished within two years, replaced with the Cabrini Center for Nursing and Rehabilitation. Now the lot is home to the New Amsterdam School and a complex of luxury apartments. 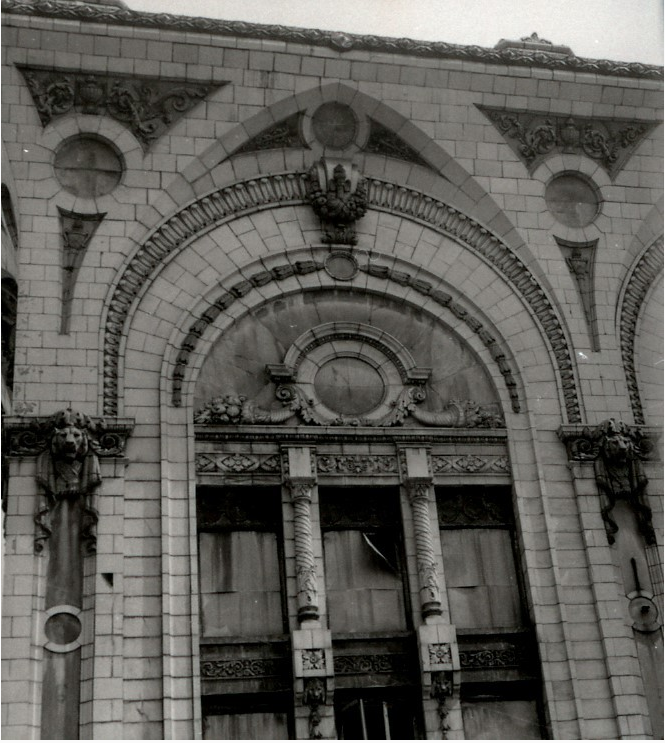 Our Historic Image Archive has several very interesting detailed shots of the exterior, taken by Carole Teller before the theater was demolished in 1968.

While the Loew’s Avenue B Theater no longer stands, it still represents a legacy of luxury and entertainment within the East Village’s communities.  It was an early passion project of a man who would go on to dramatically shape the face of American cinema as we know it today.

Explore our Historic Image Archive for a deeper visual dive into our neighborhood’s fascinating architecture, both past and present.  And you can the full Carole Teller’s Changing New York collection in our archive here.

2 responses to “Movie Theaters of the East Village: Loew’s Avenue B”