Jackson Pollock lived a relatively short, but extremely productive artistic life.  It is not a surprise that most of his prolific years were spent in the Village, influenced by the intensity, expanse, and rhythm of the city. 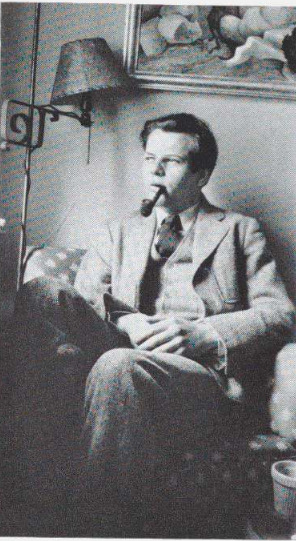 One of his lesser-known homes, when he himself was a still-unkown painter just starting out, was 49 East 10th Street.

Paul Jackson Pollock was born on January 28th, 1912 in Cody, Wyoming.  His family moved several times during his childhood, and eventually ended up on the west coast in Chico, California, and finally, outside of Los Angeles.  In September of 1930, Pollock followed his brothers Charles and Frank to New York City, where they were living.  Charles had moved to New York several years before to study art at the Art Students League, and Frank had begun studying literature at Columbia.  Paul Jackson Pollock dropped his first name once in New York and began going by his middle name, Jackson.

Upon his arrival, Pollock began to study with Thomas Hart Benton, an artist whom he respected and admired, even though their eventual styles were quite different.  He especially loved the Village, and studying at the Art Students League made living in the Village very convenient.  He lived and worked in numerous places during his time here; 240 West 14th Street (his first recorded address in NYC), 46 Carmine Street, 46 East 8th Street, 76 West Houston Street, 47 Horatio Street, and 49 East 10th Street.

At the time records list Pollock studying mural painting with Thomas Hart Benton at the Art Students League in October of 1931, his address was recorded as 49 East 10th Street.  This Italianate style row house was erected circa 1851-1852. In 1934, The Artists and Writers Dinner Club, a Depression-era group that provided nightly dinners to destitute people in the arts, was located here.  Members of the club included, among many others, John Sloan, one of Pollock’s other teachers and mentors.

His early years in the Village had an unexpectedly long reaching impact; he inadvertently started the Washington Square Outdoor Art Exhibit.  In 1931, Pollock was in desperate need of money, and began to set up his art for sale on a sidewalk near Washington Square Park.  Soon, his friend (and fellow starving artist) Willem de Kooning joined him, as well as other Village artists like Alice Neel, Saul Berman, and Ilya Bolotowski. Eventually, this sidewalk grew into the Outdoor Art Exhibit, which is still in operation happening twice a year on the weekends surrounding Memorial Day and Labor Day.

Between 1935-1942, Pollock worked on the Work Progress Administration’s Federal Art Project, part of the larger WPA mission to provide government support to workers in artistic, infrastructural, etc. projects during and after the Great Depression. The income he earned here gave him enough financial security to live and experiment with his art.

By 1947, his iconic”drip style” emerges.  Also known as “action paintings,” the drip style is marked by the use of sticks, trowels, or knives to drip and splatter paint, as well as pouring paint directly from the can.  The direct physical engagement with his materials brought gravity, velocity, and improvisation to the artistic process.

Pollock was to become one of the most famous artists in the Abstract Expressionist movement, also called the New York School, which was responsible for pulling the center of gravity of the art world from Europe to New York City, and specifically  Greenwich Village.  The New York School included, among others, contemporaries  Willam de Kooning, Franz Kline, Helen Frankenthaler, Mark Rothko, Robert Motherwell, Joan Mitchell, Grace Hartigan, Elaine de Kooning, and Pollock’s wife, Lee Krasner.

The area south of Union Square was a center of much of this activity.  49 East 10th Street is one of many buildings in this area in which great people, events, businesses, and institutions connected to the revolutionary changes in the world of art, politics, music, and publishing were located.  In spite of this, the 170 year old 49 East 10th Street is not landmarked, nor is most of its surroundings.  And as development pressure on the area increases from the city’s 14th Street Tech Hub, and the rapidly expanding incursion of ‘Silicon Alley’ and Midtown South into the area, this is becoming a greater and greater threat to these and other historic buildings, several of which have been lost in recent years.

Want to help?  Send a letter here urging city officials to support landmark designation of these and other buildings in the area.  And find out more about the fight to protect the area and its amazing history at www.gvshp.org/savemyneighborhood.