80 Fifth Avenue, an elaborately-detailed Renaissance Revival style office building constructed in 1907-1908 by the architecture firm of Buchman and Fox, has been a striking presence at the southwest corner of Fifth Avenue and 14th Street for well over a century. The stunning architecture would be enough to warrant landmark designation of the 17-story office, store, and loft building, which has housed law firms, clothing and jewelry shops, magazine and real estate offices, a school, and civic organizations over it’s more than one hundred ten year history. But beginning in 1973, the 5th floor was also home to the National Gay Task Force, the country’s first national LGBT rights organization, during its early period when it made groundbreaking advances — the first in fact ever made — for LGBT rights on the federal level. 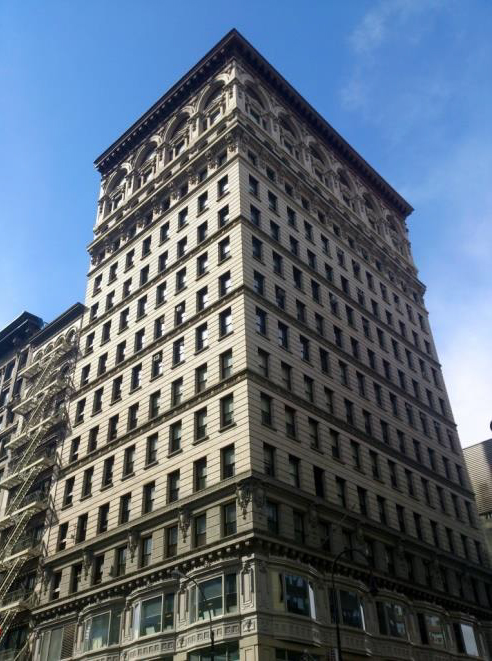 This building was constructed in 1908 to be used as manufacturing and office space.  Known as both 80-82 Fifth Avenue and 2-4 West 14th Street, its facades facing two of New York’s busiest streets is full of stately embellishments.

This beautiful building’s lower and upper levels feature decorative floral and geometric ornamentation, elaborate cornices, and angled bay windows on the third floor. Ornamented pilasters are found at either side of these windows, with slightly more austere middle floors and in its arched windows and elaborate ornamentation at the top story.

The 5th floor of 80 Fifth Avenue was a site of great organizing history for the LGBTQ movement.

Among the Task Force’s accomplishments during the time it was located at 80 Fifth Avenue included getting the American Psychiatric Association to end its classification of homosexuality as a mental illness; getting the federal government to end its ban on employing gay or lesbian people in any federal agencies (though a guarantee not to discriminate based upon sexual orientation was not implemented until decades later); and brokering the first meeting of gay rights advocates with the White House in 1977.

According to John D’Emilio’s “Interpreting the NGLTF Story:”

The Task Force played a critical role in the campaign to eliminate the sickness classification of homosexuality. It worked to lift the prohibition on federal civil service employment for gays and lesbians. It strove in the 1970s to make the Democratic Party responsive to the gay community. It took the lead in the 1980s in national organizing against homophobic violence. As AIDS began to devastate gay male communities, the Task Force shaped the first serious efforts in Washington to address the epidemic. It was a founding member of the Military Freedom Project, which prepared the ground for the gays-in-the-military debate of 1993. It has worked with the administrations of presidents from Carter to Clinton.

Additionally, some of the Task Force’s founders were former Gay Activists Alliance (GAA) members; this is significant to the building’s landmarking because, just this past June, in honor of the 50th anniversary of the Stonewall uprising, the Landmarks Preservation Commission designated the original home of the GAA as a landmark itself. We hope that this precedent will help to prove that 80 Fifth Avenue deserves to be landmarked due to the significance of this history.

While buildings like 80 Fifth Avenue are unlikely to be demolished any time soon, much of their non-landmarked surroundings are, and buildings like 80 Fifth Avenue are vulnerable to losing their distinctive architectural ornament if their owners decide it’s more expedient to remove such details (imagine what this massive building would look like stripped of architectural detail).  Also while current zoning provides a disincentive to ever demolish a building of this size, zoning can change, and we have no idea what the future might hold and whether the unlikelihood of demolition may change.  We are therefore seeking landmark designation for this and about 200 surrounding buildings on a dozen blocks. Join us in urging the city to protect this vital history and neighborhood NOW – click here.