The New-York Historical Society was established as New York’s first museum in 1804, a mere 15 years after George Washington’s inauguration. Its present home on Central Park West was built between 1902 and 1908 and designed by the architectural firm of York and Sawyer. This venerable institution offers its visitors both online and on-site collections of art, objects, artifacts, documents, books and photographs. While one of the Upper West Side’s most venerable and iconic institutions, its foundations are firmly rooted in the Lower East Side, specifically the East Village.

Facing Central Park West between 76th and 77th Streets, the New-York Historical Society’s building is an individual New York City landmark (designated in 1966), part of the Central Park West/West 76th Street Historic District (designated 1973), and part of the sprawling Upper West Side/Central Park West Historic District (designated 1990). This Beaux-Arts structure in the Academic Classical style was originally built without the north and south wings that we see today, which were added in 1937-39 and seamlessly designed by the architectural firm of Walker & Gillette.  Located just to the south of the  American Museum of Natural History and just to the north of the limestone Neo-Gothic Fourth Universalist Society Church, and smack dab in the middle of Central Park West’s two-mile-long parade of twin-towered apartment buildings and iconic emblems of what can only be called “classic New York,” the New-York Historical Society is firmly ensconced not only in the cream of  New York’s cultural crop but its uptown architectural elite as well.

But the Society’s founding reflected a very different geographic orientation.  It was instigated by eleven prominent New Yorkers who met on November 20, 1804 making it the oldest operating museum in New York City, pre-dating the Metropolitan Museum of Art by 76 years, and for decades the only museum in New York City considered to be of national distinction. The intent of the founders was to establish a museum and library focused on the history of America and secondly New York State, as seen in the minutes form 1804:

The following Persons viz: Egbert Benson, Dewitt Clinton, Rev. William Linn, Rev. Samuel Miller, Rev. John N. Abeel, Rev. John M. Mason, Doctor David Hosack, Anthony Bleecker, Samuel Bayard, Peter Stuyvesant and John Pintard, being assembled in the Picture Room pf the City Hall of the  City of New York, agreed to form themselves into a Society the principal design of which should be to collect and preserve whatever may relate to the natural, civil, or ecclesiastical History of the United States in general and of this State in particular and appointed Mr. Benson, Doctor Miller, and Mr. Pintard a Committee to prepare and report a draft of the Constitution.

Some names in that list should be familiar. There is Anthony Bleecker, who owned land in what today is NoHo and for whom Bleecker Street is named. There is also Samuel Bayard, brother of William Bayard whose home was near what today is Jane Street where Alexander Hamilton died after being shot in the infamous duel with Aaron Burr in 1804. Finally, there is Peter Stuyvesant, the descendant of the director-general of New Netherland, Petrus Stuyvesant who was the original owner of much of the land which today comprises the East Village. Later, Petrus Stuyvesant’s great-great-grandson Peter Gerard Stuyvesant was president of the Society from 1836 to 1839, as was East Village resident Hamilton Fish from 1867 to 1869.

But the N-YHS’ East Village roots are not limited to the prominent New Yorkers who helped get it off the ground.  In fact, the Society’s first permanent home, and first purpose-built structure, was located at 170 Second Avenue at the southeast corner of East 11th Street.  During its first fifty-three years, the Society and its ever-growing collections were housed in a variety of rented and shared spaces.  But then in 1857 they moved into a grand new home built for them just across the street from St. Mark’s in the Bowery Church — a church deeply connected to the Stuyvesant family and built on the site of Governor Stuyvesant’s chapel.  This corner lot had in fact been owned by Peter Gerard Stuyvesant, and the first permanent home for the N-YHS built upon it was designed by the firm of Mettam & Burke to house the Society’s museum and library.

The home on Second Avenue afforded the Society for the first time in its existence room for its collections. The new building put the Society in the position to take on the role as the leading museum in New York, and to expand. Ironically the new building attracted more donations, especially of artworks, and the Society soon began to run out of space. This was the beginning of the Gilded Age, when men of great fortunes with names such as Morgan, Vanderbilt and Frick were donating to New York’s cultural and charitable institutions, and the Society was one of those beneficiaries.

Bursting at its seams, in 1901 the Society formed a building committee to create a new, even larger and grander home for itself.  Aside from its need for more space, the Society’s home on Second Avenue — once the most prestigious address in New York (see also here)– was now the center of a teeming, working-class immigrant district, and New York society had for the most part migrated uptown. Ground was broken in 1902 on the Society’s new home facing Central Park, where the Metropolitan Museum of Art, the Museum of Natural History, and a growing number of elite museums and other institutions were locating.  After more than a half century in the East Village, the Society’s collections were moved into its new home in 1908.

By 1923, the building had been demolished entirely, erasing any trace of the Society’s presence in the East Village.  In its place, the Peter Stuyvesant Apartments were built in 1929, designed by Segal & Sohn, and remain to this day. 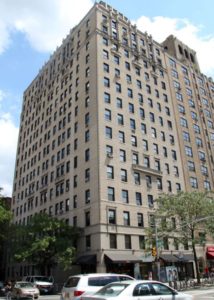 While the N-YHS followed the movement of cultural institutions uptown in the early 20th century, ironically as the 20th century proceeded, the East Village became a vibrant center of art and culture (if not social elites) in New York.  So while N-YHS flourished uptown, its former home in the East Village also flourished as a center of art and culture in the years that followed, with PS 122, Anthology film Archives, LaMaMa ETC Theatre, Theater for the New City, and many other dynamic institutions locating within yards of the Society’s former home.