Art is in the DNA of New York City.  It’s not only found in the many museums and galleries our city has to offer, but on the sidewalks under our feet, on walls, in parks, and all throughout our streets.

The East Village has a particularly long and vital history of creating art that can be found throughout its streets which continues to this day. Here’s a sample of just some of the street art that can found today in the East Village. 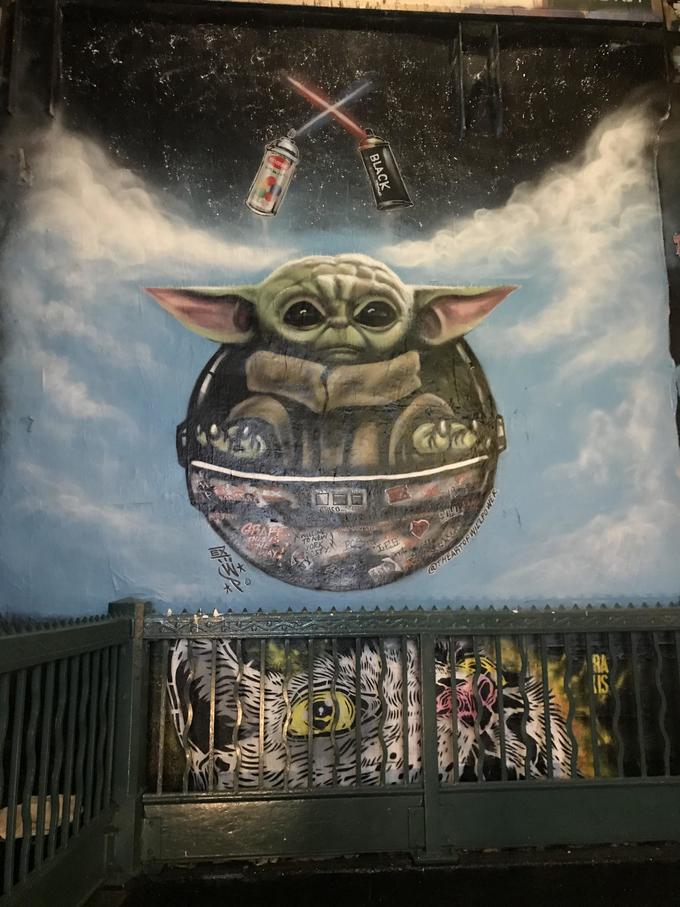 The newest addition to the East Village’s long list of murals is the closing trend of 2019, Baby Yoda. The mural is titled “The Child” and the adorable baby Yoda depicted in graffiti styling can be found outside the East Village’s Second Avenue subway stop at Houston Street. Will Power was the street artist who painted Baby Yoda earlier this month. An interview with Power from Eyewitness News ABC7NY states that “he added a few subliminal messages within the mural, including two spray paint cans made to represent the fight in Star Wars between Darth Vader and his son Luke Skywalker to play on good vs. evil, graffiti art vs. graffiti street bombing.”

You can watch a timelapse video of the mural being created here (provided by Eyewitness News ABC7NY). 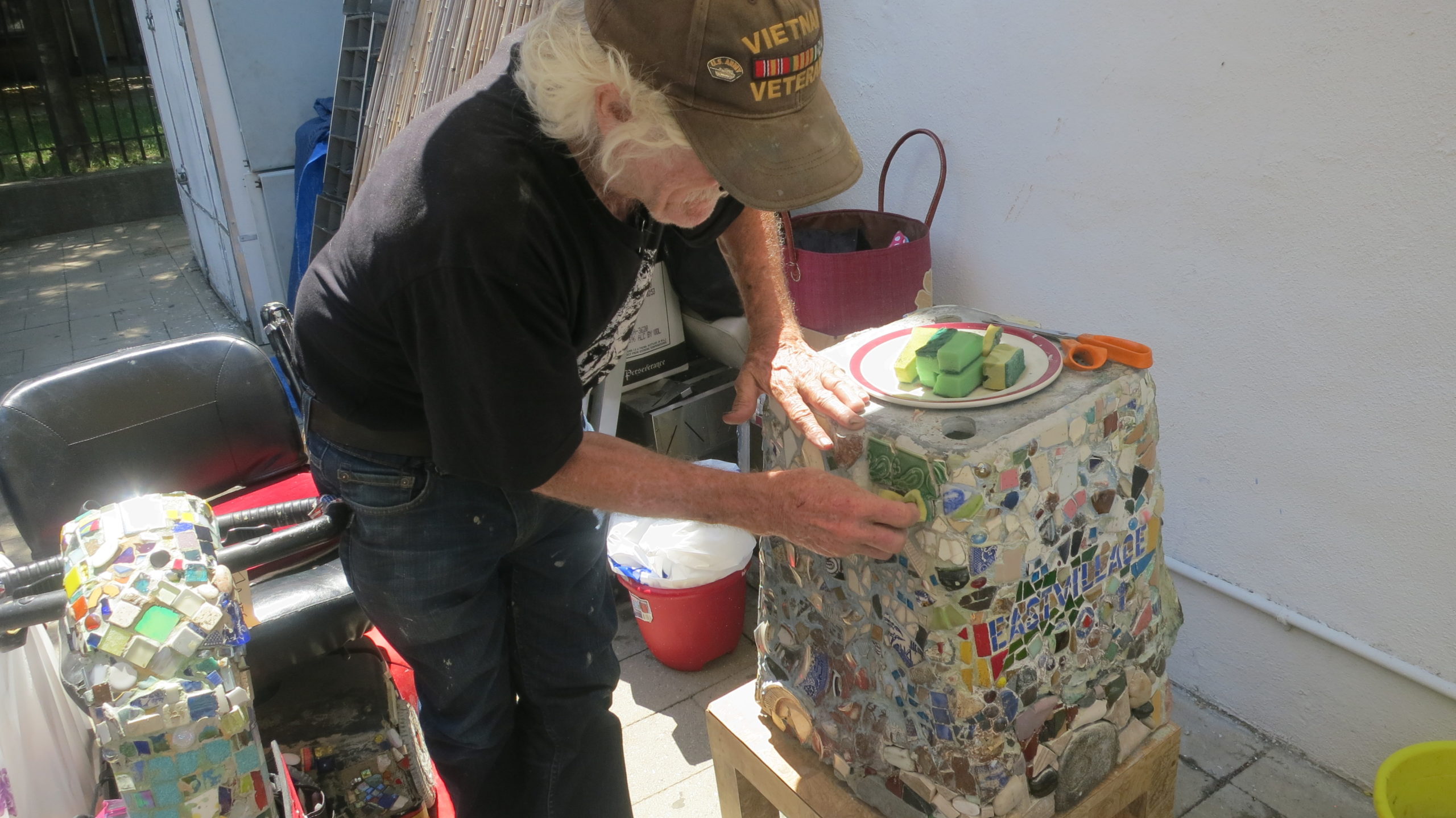 If you take a stroll through the East Village you are bound to see the lightpole mosaics by Jim “Mosaic Man” Power. His legendary “Mosaic trail,” an incredible display of his work on over 80 lampposts throughout the East Village, is a must for tourists and New Yorkers alike. Power uses various used items, such as dishes and tiles, mostly donated, to create his work.

Powers began his mutli-decade art project in 1985, with light poles around Astor Place.  The colorful poles had taken a beating from the weather, with many tiles falling off at the base and near the top. Advocacy groups like the Village Alliance business improvement district, City Lore, and Village Preservation successfully lobbied to have the sculptures’ restoration added to the agenda for the city Department of Design and Construction’s $16 million reconstruction plan for Astor Place and Cooper Square. 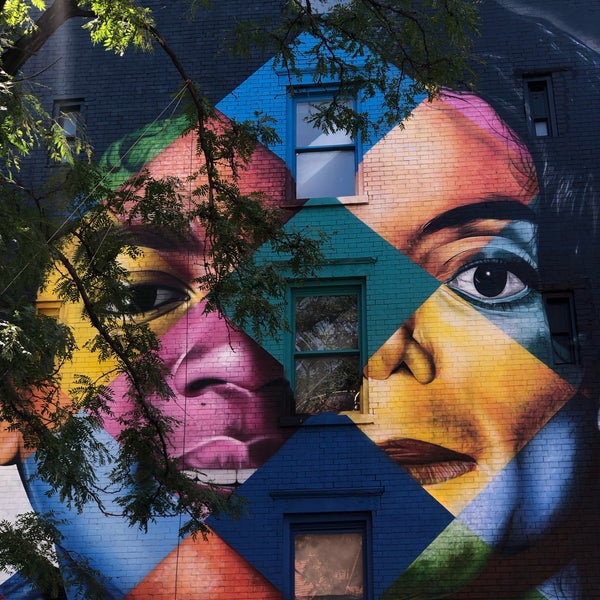 This is by far one of the largest murals in the East Village, and is hard to miss due to size and its vibrant coloring. Eduardo Kobra of Brazil created this mural as a tribute to Michael Jackson, titled Black or White, that depicts the singer with half his face as his teenage self of the Jackson Five and the other half as his older self, the King of Pop. Kobra utilizes bright colors and bold lines to create a kaleidoscope theme throughout all of his murals. This technique of repeating triangles and squares allows him to bring to life the famous people he depicts as if they were viewed through the lens of a kaleidoscope. Kobra has 18 murals throughout New York City and is renowned as one of the most prominent and prolific muralists working today. You can check out his other works below. 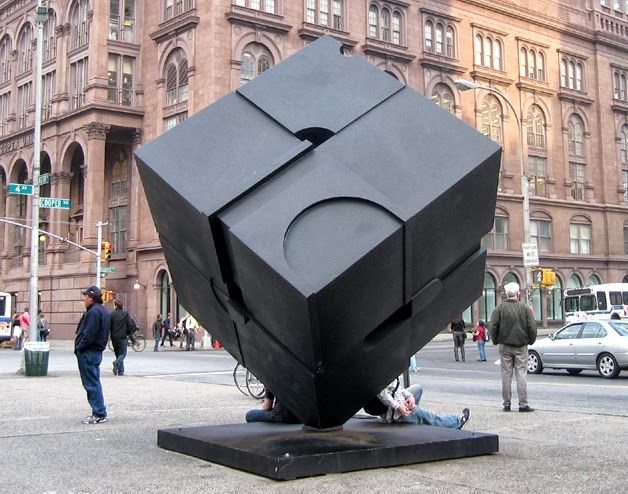 The heart of Astor Place is the famous “Alamo” sculpture.  The 1,800-pound  artwork created by Bernard “Tony” Rosenthal was originally named “Sculpture and the Environment,” but was eventually renamed The Alamo by his wife, Cynthia Rosenthal,  because its size and mass reminded her of the famous Alamo Mission in San Antonio. However, the hundreds of tourists daily that gather around to move the sculpture, and many New Yorkers, simply call it “the Cube.”

According to the NYC Department of Design and Construction, The Alamo Sculpture was originally installed in 1967 as part of  “Sculpture and the Environment.”  The Alamo was one of 25 temporary art installations that were intended to remain for only a few months.  But local residents petitioned the City to keep the Alamo, and in 1968 the sculpture became a permanent gift to New York City and the East Village.  “Alamo” was the first permanent contemporary outdoor sculpture installed in the City of New York. 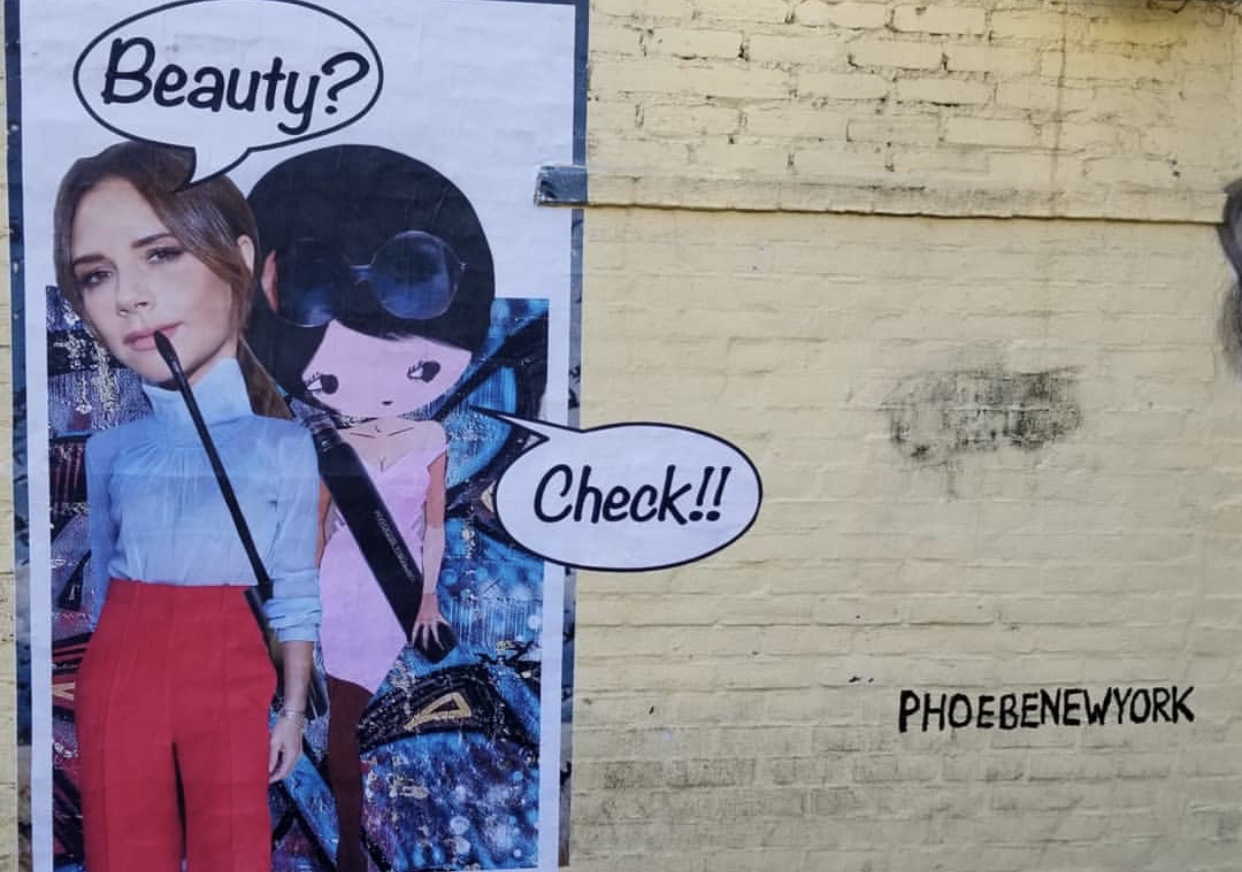 Libby Schoettle is a NYC artist originally from Pennsylvania who moved to the city to attend Hunter College. You have probably seen her art around the city; either on buildings or lamposts. Libby’s art has a common theme which features her alter ego “PhoebeNewYork.” According to her page, “Phoebe’s dark and funny explorations into love and life reveal Libby’s own vulnerability, raw emotions, and witty observations. Phoebe first came to life in collages created with found objects, including vintage photographs, magazine pages, clothing, as well as old books, record covers, and the occasional iconic pop art element. The artist and her artwork have been featured in publications such as Teen Vogue, Glamour Italia, Glamour Espana, Teeth, Citizen Brooklyn, and IL Fotografo.”

Many artists of the mid-20th century flocked to the East Village because space for working and living was relatively cheap. The East 10th Street Galleries, a cooperative of artist-run galleries, made the East Village a hot spot for creative works. In the late 1960s, 70s, and 80s, which were in some ways hard times for the East Village, murals began to appear all over the community, beautifying the neighborhood and keeping it connected to its artistic roots.

Village Preservation has been part of the campaign with East Village Community Coalition and others to advocate for the creation of an East Village Special Zoning District to protect small businesses and discourage chain stores in the neighborhood, and has been leading a campaign to seek expanded landmark protections in the neighborhood. To help push for expanded landmark protections in the East Village, click here.  You can read more about our small business protection/anti-chain store proposal and send an email to local officials here. You can also learn more about Village Preservation’s involvement with the East Village here.

One response to “East Village Street Art Lives On”