Harlem Renaissance painter Beauford Delaney was known for his colorful modernist compositions and unique approach to figuration. One of the most important African-American artists of the early 20th century, he often painted portraits of prominent black figures, street scenes, and abstract paintings. 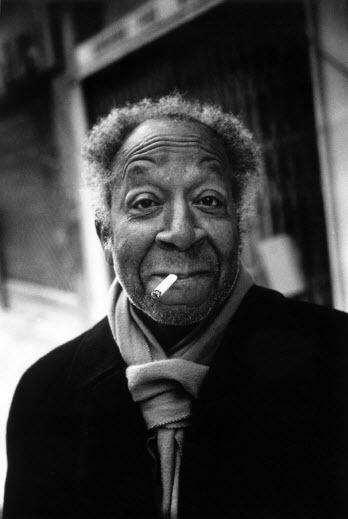 Delaney spent a good portion of his career in Greenwich Village, with many of his most famous works being inspired by its streetscapes. There he encountered like-minded creative types that helped mold his career.

Beauford Delaney was born December 30, 1901 in Knoxville, Tennessee. He was one of 10 children born to a prominent black family. Delaney started his career in art early on working as a sign-post painter as a teenager.  He then moved on to study in Boston at the Massachusetts Normal School, the South Boston School of Art, and the Copley Society. He first made his way to New York in 1929 where he spent his time between Greenwich Village and Harlem. The timing of his move coincided with the Great Depression, so making a living as an artist was especially challenging. He was able to support himself with various small jobs while painting simple portraits, often depicting the deprived current state of the city. He also managed to secure housing by working at the Whitney as a guard, telephone operator, and gallery attendant, in exchange for a studio space and a place to live.

Living in Greenwich Village, Delaney drew inspiration for his colorful paintings of the 1930s and 1940s from his neighborhood. Common elements would be repeatedly utilized such as fire escapes, lampposts, and hydrants. He had a large friend group of cultural luminaries like Georgia O’Keeffe, Henry Miller, & James Baldwin. In Greenwich Village, Delaney also explored his sexuality more, becoming part of a gay bohemian circle of friends.

Beauford led a double life here in New York. Even though he became more open about his sexuality, he still sought to hid it from people outside of Greenwich Village. When he would travel to Harlem to visit his predominantly African-American colleagues, Delaney made sure to shroud his social affairs back in his neighboorhood. He feared that his Harlem friends would not be as accepting of his homosexuality. The pressures of being “black and gay in a racist and homophobic society” inspired his secrecy, but Delaney also battled with his own Christian upbringing which disapproved of homosexuality, and his own brother, Joseph, also being in the New York art scene.

In 1953, Delaney was convinced to move to Paris by his friend James Baldwin, who had already fallen in love with the artistic community of the city. They lived in the neighborhood of Montparnasse, which was an artists’ enclave where many creatives were thriving. They both felt a sense of freedom as gay black men that they had never felt before in the United States. Delaney’s years in Paris were crucial to his career, as it led to a dramatic shift from compositions of streetscapes to abstract expressionist pieces of color and light. Delaney’s early works with abstraction predated the  Abstract Expressionist movement. This made him a forerunner of one of the most important ideological and stylistic developments in twentieth-century American art. As the Abstract Expressionists began to gain movement in the late 1940s, Delaney’s abstract work started to gain some attention.

By 1961, Delaney developed a heavy drinking habit that began to impair his mental and physical health. He fell into spurts of madness and mental breaks which took a major toll on his social life.  In 1975, he was hospitalized and committed to St Anne’s Hospital for the Insane. Beauford Delaney died in Paris while at St Anne’s Hospital on March 26, 1979. Delaney did not receive much success during his lifetime. However, following his death, he was praised as a great and neglected painter. Some of his most renowned works include The Burning Bush (1941), Can Fire in the Park (1946), Jazz Quartet (1946), and Portrait of James Baldwin (1965).