It times of great uncertainty or need, special people emerge to address challenges that face us all. Often it starts with the plight of the most vulnerable among us, which if not attended, can spread to the larger society. This Women’s History Month we take a look at once such special figure — a woman who lived and worked in our neighborhoods and set an example of perseverance, education and healthcare for all — Dr. Elizabeth Blackwell. 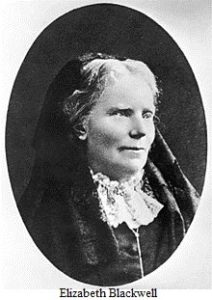 These three sites associated with Dr. Elizabeth Blackwell and her groundbreaking work can be found on Village Preservation’s Civil Rights and Social Justice Map.

In 2018 Village Preservation dedicated our twelfth historic plaque,  marking the former home of the New York Infirmary for Women and Children at 58 Bleecker Street at Crosby Street. This groundbreaking facility, opened in 1857, was the very first hospital run by and for women, and was operated by Elizabeth Blackwell. We were proud to be joined by Blackwell’s great grand niece and representatives of New York Presbyterian Hospital (the successor to the infirmary) and scholars and activists in the field of women’s health and education.  You can see images and video of that ceremony here. 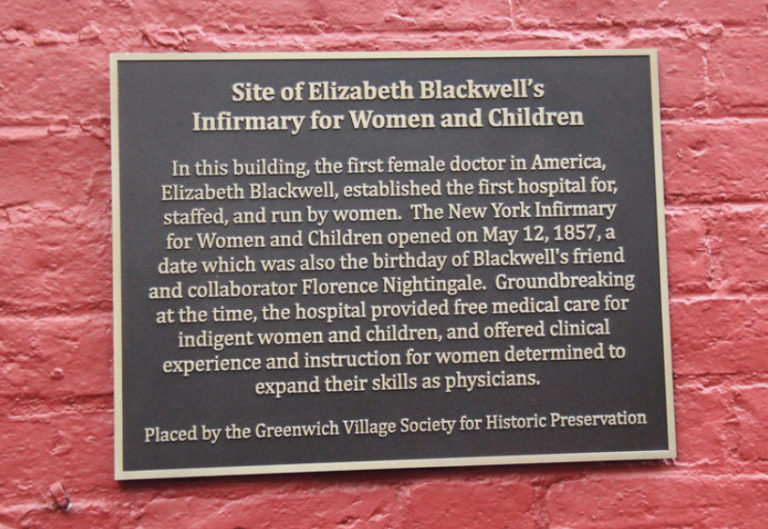 Born on February 3, 1821, in Bristol England, Blackwell and her family moved to the United States in 1832. Following the terminal illness and death of a friend who felt she would have been better served by a female doctor, Elizabeth decided to pursue her medical degree. Every school she applied to turned her down until 1847, when Geneva Medical College in Western New York State accepted her. The story goes that the faculty, assuming that the all-male student body would never agree to a woman joining their ranks, allowed them to vote on her admission. As a joke, they voted “yes,” and she gained admittance, despite the reluctance of most students and faculty.

Blackwell received her degree in 1849, becoming the first woman in America to receive a medical degree and thus to formally practice medicine.  Following her graduation in 1849, she worked in clinics in Paris and London, and in 1851 she returned to the United States. She moved to New York City and rented a floor in the building still located at 80 University Place, which was at the time numbered 44 University Place, and used it as her medical office and home. Blackwell began providing medical services to patients at this location, most of whom were females and members of the local Quaker community. 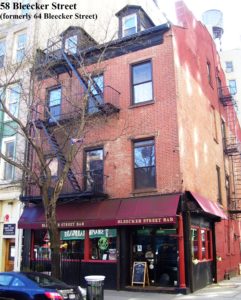 In response to the squalid conditions and a lack of available medical care on the Lower East Side, Blackwell opened a dispensary in a since-demolished house at 207 East 7th Street which consisted of a single rented room. Here Blackwell would see and treat women and children who could not pay for care three days a week. She moved the dispensary to 36 Avenue A/136 East 3rd Street (present-day 150 East 3rd Street) for more space, and in 1854 the New York Dispensary for Poor Women and Children was incorporated and the institution moved to a small house on the corner of East 15th Street and Second Avenue. 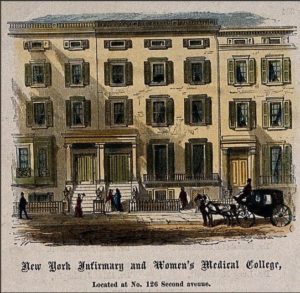 But in 1857,  Blackwell made an even greater leap forward when she established the first hospital for women, staffed by women, and run by women, called The New York Infirmary for Women and Children. It was located in the house at 58 Bleecker Street, which was originally numbered 64 Bleecker Street. Built in 1822-1823, the house was erected for James Roosevelt, great-grandfather of Franklin Delano Roosevelt, who lived there until his passing only ten years before Blackwell began renting there. 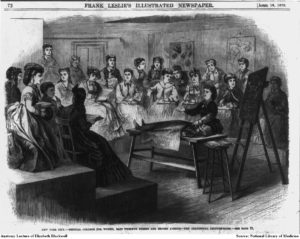 Blackwell’s hospital opened its doors on May 12, 1857, the 37th birthday of Florence Nightingale, whom Blackwell had befriended earlier in her career. The hospital was open seven days a week and provided medical care for the most vulnerable women and children free of charge. The staff at first consisted of Elizabeth, director; her sister Dr. Emily Blackwell, surgeon; and Dr. Marie Zakrewska. (Emily Blackwell was a notable in her own right, the third woman to receive a medical degree; the sisters are the subject of the forthcoming dual biography by Janice P. Nimura). The hospital provided practical medical instruction for women studying for their medical degree, which was unavailable elsewhere. The hospital was operated solely by a staff of women, and its opening was attended and praised by the noted abolitionist preacher Rev. Henry Ward Beecher. 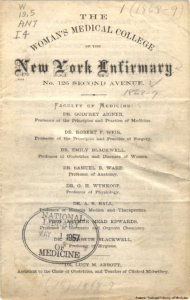 However, many others were not enthusiastic about this enterprise, and according to Blackwell she was told that no one would rent her a space for this purpose, that the police would shut the hospital down, that they would not be able to control the patients, and that no one would financially support such an institution. However, the hospital was able to operate and over time views on women in medicine evolved. The hospital was responsible for innovations in hygiene critical in preventing disease and in educating the public on those benefits, such as bathing ailing patients and encouraging them to keep clean. Blackwell also launched a “Sanitary Visitor” program to visit the needy in their homes in the slums and improve hygiene. The program later expanded into the hospital’s “Out Practice Department,” a precursor of the Visiting Nurse Service. The first Sanitary Visitor, Rebecca Cole, was also the second African American woman Doctor and the first to graduate from Woman’s Medical College in Pennsylvania.

According to one source, the hospital moved in 1861 to 126 Second Avenue (present-day 128 Second Avenue) where Blackwell would also establish the first women’s medical college. In 1861 to help in the Civil War effort, thousands of women, exhorted by women’s magazines of the time, had gathered at one another’s homes or in churches to make bandages for the troops. Some worked at Henry Ward Beecher’s church where a dozen sewing machines were kept going.

According to Gotham:A History of New York City to 1898 by Edwin G. Burrows and Mike Wallace:

In addition, Dr. Elizabeth Blackwell, seeing the need for nurses, began giving two-month training courses in her infirmary, and at Bellevue or New York Hospital, then sending volunteers on to Washington.

Soon, several elite women decided these efforts needed coordination. Dr. Blackwell joined with Mrs. William Cullen Bryant, Mrs. Peter Cooper, and “Ninety-Two of the Most Respected Ladies” in calling for an oversight organization. On April 26 four thousand women gathered at the Cooper Union to form the Women’s Central Association of Relief for the Sick and Wounded of the Army. The twenty-four-year-old Louisa lee Schuyler, a member of the Rev. Henry Bellow’s fashionable All Souls Unitarian Church on Gramercy Park, became the key organizer.

In 1865 the trustees first applied for a charter to become a medical college, and in 1868, The Woman’s Medical College of the New York Infirmary began, with fifteen students and a faculty of nine, including Elizabeth as Professor of Hygiene, and her oft-eclipsed sister Emily as Professor of Obstetrics and Diseases of Women.  The college was only staffed by women, and offered four-year educational programs during a time in which medical schools, catering almost exclusively to men, only offered two-year programs. In its thirty-one years of successful operation, the Women’s Medical College educated more than 350 female physicians.

Elizabeth left for England shortly after the opening of the college, and the work of the college and hospital was carried on by her sister Emily. Elizabeth spent the rest of her years in England continuing on her work. She died there in 1910. 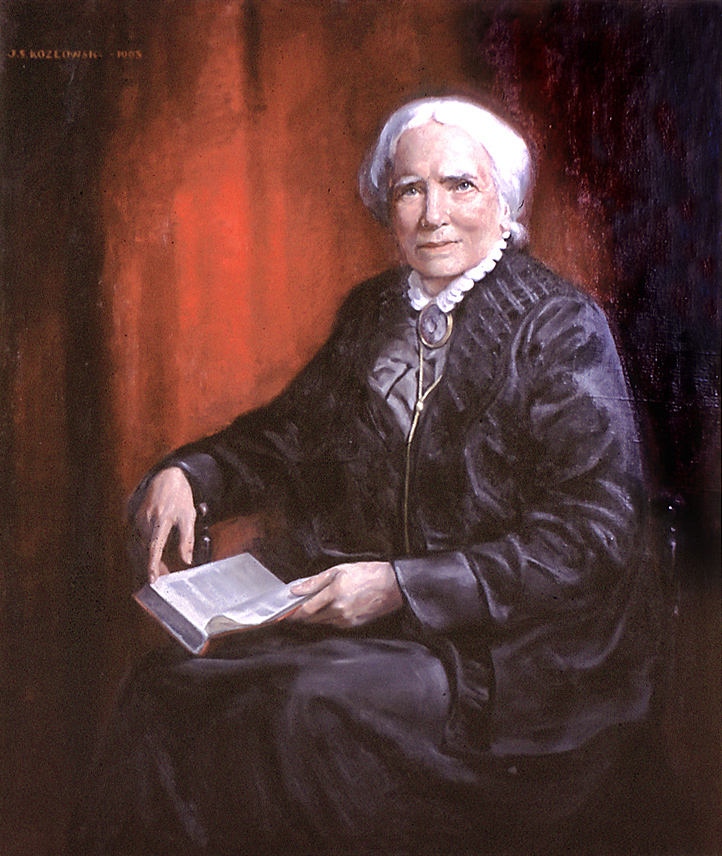 For more information on Blackwell and other revolutionary women in our area, see the our Civil Rights and Social Justice map or our page on the historic plaque we placed on Blackwell’s former clinic on Bleecker Street.  Tell us who your favorites are!