It’s time to dive into our beloved neighborhoods of Greenwich Village, the East Village, and NoHo as they’re seen through the movie camera lens. Presented in no apparent order, this list is full of Village locations, Villagers behind and in front of the camera, romance, action, drama, intrigue, and all the things to keep us occupied when we’re looking for something to watch. 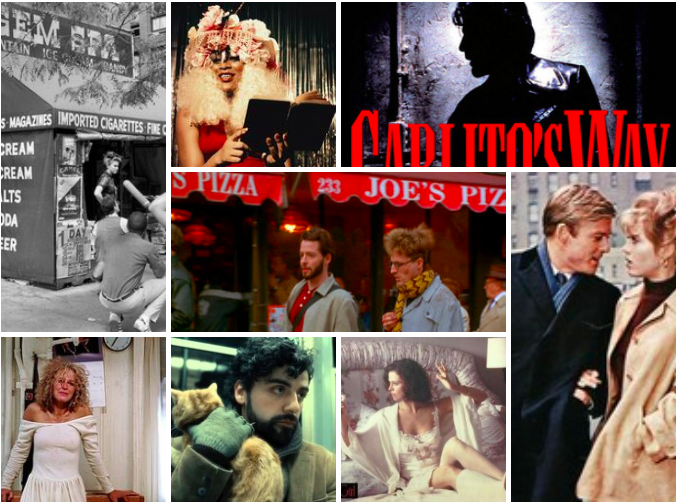 Enjoy, and make sure to tell us what your favorites are!

If Beale Street Could Talk – the West Village (Hulu)

In this gorgeous adaptation of the James Baldwin story of the same name, director Barry Jenkins (Moonlight) brings Baldwin’s characters to life. Tish and Fonny’s life in the Village is full – they take walks, go grocery shopping, and join the Village community of caring and protective neighbors. The couple are defended by an Italian shop owner from a cruel police officer. They dance through the streets, and walk home down Minetta Lane, which felt like a very beautiful nod to the Village’s historic African-American neighborhood, called “Little Africa,” which was centered around the area of Minetta Lane.  Tish and Fonny make the decision to turn their lifelong friendship into romance one evening in Washington Square Park.

Desperately Seeking Susan is a wild Village story of mistaken identity and hijinks. Madonna eats cheese doodles outside of GEM Spa and trades in her fateful jacket at a beloved East Village thrift shop. Co-starring Rosanna Arquette.
Madonna’s own words about her apartment at 230-232 East 4th Street: This is the stoop that I kind of got discovered on… this photographer comes walking down the street and asks if he could take our photograph and … Turns out that his mother was a casting director and…That’s what led to my audition for ‘Desperately Seeking Susan’ and then the rest is history.

It’s not often that a building plays a starring role in a major motion picture. But in Alfred Hitchcock’s Rear Window, which premiered on August 1, 1954, that is exactly the case. Most people know that Hitchcock set the film in Greenwich Village, but did you know that the location he used as a reference for the setting actually exists? The multi-dwelling apartment building and complex of next-door buildings that share a common courtyard at the corner of Christopher Street and Hudson Street is the object of Jimmy Stewart’s obsession and where the murder in the lauded Hitchcock film takes place.

With Sandra Bullock, Cate Blanchett, Anne Hathaway, Mindy Kaling, and a stellar ensemble cast, we meet Danny Ocean’s estranged sister, Debbie. Along with her team, she attempts to pull off the heist of the century at New York City’s star-studded annual Met Gala. Her first stop is to assemble the perfect crew – and eat in at one of the all-time best spots in the East Village.

Love is Strange – Greenwich Village (for rent on Amazon)

In this complex, dynamic romance by Village filmmaker Ira Sachs, John Lithgow and Alfred Molina tie the knot in an idyllic wedding ceremony in lower Manhattan. But when Molina loses his job, the couple must sell their apartment and – victims of the New York City real estate market – temporarily live apart until they can find a place they can afford. Also starring Marisa Tomei, Darren Burrows, and others, this film is very much of New York City, and the Village – especially the West 4th Street area – is featured prominently.

Jim Jarmusch, a Villager and NYU-film graduate, made this wild Cannes-winning film about a self-styled New York hipster who is paid a surprise visit by his younger cousin from Budapest. Her visit kicks off a strange, unpredictable adventure. The movie stars jazz musician John Lurie and former Sonic Youth drummer-turned-actor Richard Edson. While we don’t see much beyond the drab part of the Lower East Side where our main character lives, the glimpses that we get are wonderfully atmospheric.

Happy Birthday, Marsha! is a short film about iconic transgender artist and activist, and Villager, Marsha P. “Pay it No Mind” Johnson, and her life in the hours before she ignited the 1969 Stonewall Riots in New York City. The New Yorker calls it “A lush and speculative portrait of Marsha P. Johnson…” and Artforum calls it “A moving celebration and evocation of trans activist and artist Marsha ‘Pay It No Mind’ Johnson…” Starring Independent Spirit Award winner Mya Taylor (Tangerine). Written and directed by Tourmaline and Sasha Wortzel. 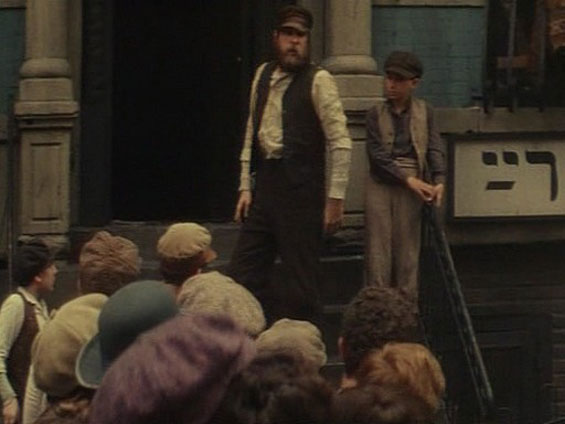 Ragtime is a 1981 American drama film based on the historical-fiction novel Ragtime by the novelist E. L. Doctorow. The action takes place in and around New York City, New Rochelle, and Atlantic City early in the 1900s. In the movie, a young black pianist becomes embroiled in the lives of an upper-class white family set among the racial tensions, infidelity, violence, and other nostalgic events in New York City. Cameos by true historic figures, including Villager Emma Goldman, dot the movie’s plot, bringing fiction with nonfiction. You can check out images in Village Preservation’s Historic Image Archive of the filming of this movie in the East Village.

With Oscar Isaac, Carey Mulligan, and John Goodman, this Coen Brothers movie tracks a week in the life of a young singer as he navigates the Greenwich Village folk scene of 1961. Guitar in tow, huddled against the unforgiving New York winter, he is struggling to make it as a musician against seemingly insurmountable obstacles – some of them of his own making. Snuggle your cat while you’re watching.

“Fatal attraction” has become a household reference for love-turned-murderous-obsession, thanks to Glenn Close and Michael Douglas. After their one night stand, Douglas is content to go back to his wife and child, but Close is certainly not. Douglas’ family is nearly ruined by Close, who brilliantly plays a “love-struck psycho-siren.” Glenn Close’s apartment is located at 675 Hudson Street.

Funny Face is an iconic (and rather dated, but still fun and campy!) romantic musical comedy about a Greenwich Village bookworm transformed into the belle of the Paris fashion runways, released on February 13, 1957. While most of the movie happens in Paris, this view of a Greenwich Village bookshop, and the shots of Washington Square Park, are delightful. Fred Astaire, Audrey Hepburn, and Kay Thompson star, and sing and dance to songs by George and Ira Gershwin. Astaire, a fashion photographer, visits a bookstore in Greenwich Village to get an “intellectual vibe” for one of his fashion shoots. It’s there where he meets the bookish, bohemian, expressive, and intellectual Hepburn – he offers her the trip of a lifetime in exchange for becoming a fashion model herself, and of course, hijinks and love ensue.

In the 1997 movie As Good as it Gets, Jack Nicholson plays Melvin Udall, a curmudgeon romance novelist cooped up in his apartment at 33 West 12th Street. He emerges from his apartment to eat at Rose Cafe & Bar, a nearby restaurant at 24 Fifth Avenue. There, he builds a relationship with server Carol, played by Helen Hunt. Over the course of the movie, Melvin learns to accept the people around him, though always with a touch of irony. The movie, which oscillates primarily between the two locations of the apartment and the cafe, demonstrates the experience of sharing the tight-knit landscape of the Village with its various residents and workers.

On May 25, 1967, the film Barefoot in the Park, based on the Neil Simon play, was released. Village real estate is a central plot point, and Village apartment “eccentricities” do make for good comedy. Jane Fonda and Robert Redford play newlyweds who decide to “rough it” in a Greenwich Village 5th-floor walk-up at 49 West 10th Street. The site is known to be modeled on 111 Waverly Place. The film also features the awning of the Hotel Earle Bar & Restaurant (101-105 Waverly Place, corner of MacDougal) and Washington Square Park. There are also scenes filmed on lower Fifth Avenue, on the blocks just above Washington Square Park. It is the colorful Village neighbors who provide them a sounding board for their fledgling union and teach them the real meaning of real commitment in the process.

Directed by Noah Baumbach, with Greta Gerwig, Mickey Sumner, and Adam Driver. Gerwig plays a young apprentice for a dance company, though she’s not really a dancer. She has a best friend, Sophie, but their relationship is on the rocks. The friendship between these two women drives the movie, which is filmed in black and white. Frances throws herself headlong into her dreams, even as their possible reality dwindles. She wants so much more than she has, but lives her life with unaccountable joy and lightness. 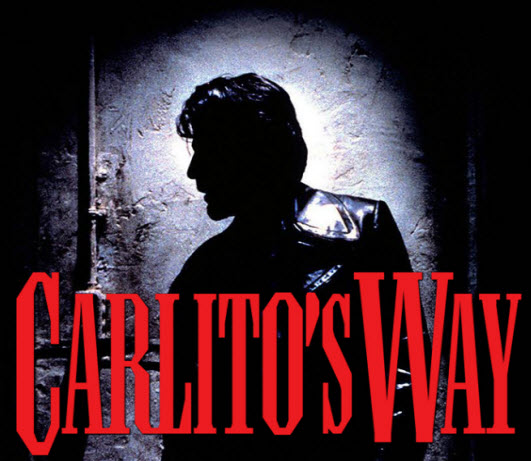 Ten years after they made “Scarface,” Al Pacino and director Brian De Palma returned with “Carlito’s Way,” another large-canvas portrait of a professional criminal. Carlito Brigante is older and wiser, and for a time seems to be luckier… you’ll have to watch it to find out what happens to him and his luck, but *spoiler alert* our hero Pacino is arrested on Gay Street. He also watches a dance at the Joffrey Ballet Theater, and explores other sites in the Village and beyond.

Unhappy with her job and her loser boyfriend – a young Villager Alec Baldwin – Melanie Griffith takes a secretarial post at a major Wall Street firm. Her boss is Sigourney Weaver, an outwardly affable yuppie – whose townhouse on Morton Street is totally beautiful – exploits Griffith’s great idea, taking it as her own. However, when she’s injured skiing, Griffith poses as her boss and falls in love with her, ahem, colleague Harrison Ford.

The film was shot in locations all around Greenwich Village. Villager Matthew Broderick’s building (same as in Working Girl) is on Morton and Hudson Streets in the West Village. The apartment is a major plot point in this off-beat romantic comedy – two men and a woman, none of whom know each other, enter a timeshare contract in which they are allowed to live in the fancy apartment at different times. The hijinks begin when the unknowing roomies meet each other on the street.

Incredibly, the same home used in The Night We Never Met and Working Girl is also featured in this Village romance movie. Richard Gere is a successful playboy restauranteur and Winona Rider is a young woman facing a life-threatening illness. In a chance meeting at his restaurant, they hit it off, despite their age differences, and end up changing each other’s lives forever. Special cameo: a poem by iconic Villager Edna St. Vincent Millay.

Serpico – Minetta Street, Greenwich Village (on Showtime, and for rent) 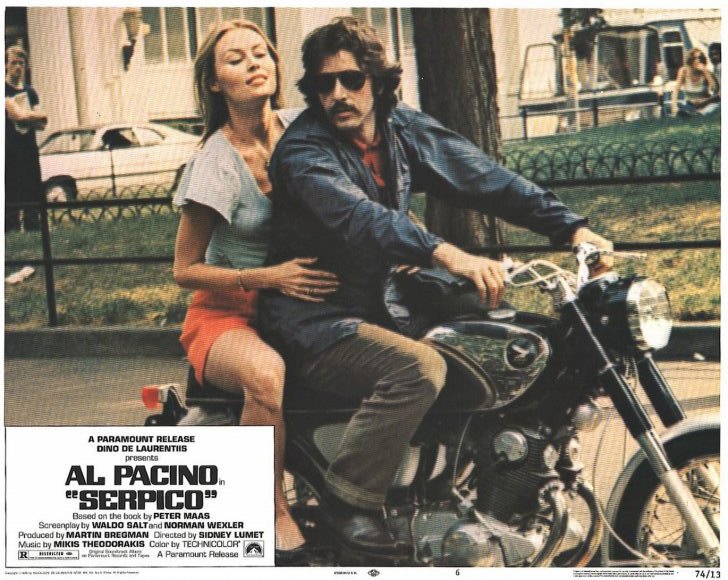 An adaptation of a true story about an NYPD officer, played by Al Pacino, who goes undercover to expose the corruption that he discovered within his own NYPD department. Al Pacino’s movie residence is at 5-7 Minetta Street. The real-life Frank Serpico, however, lived at Perry & Greenwich, a few blocks away. Pacino also nabs Rudi Casaro at 675 Hudson Street, and hangs out at NYU, on 7th Avenue South, and a number of other spots around the Village in his pursuit of justice.

Tune in next week for our Epic Watch List of TV shows, documentaries, and music videos! In the meantime, also check out our tour of movie, tv, and play locations in the Greenwich Village Historic District on our map and tours at www.gvshp.org/GVHD50tour.