Billie Holiday is considered one of the preeminent jazz vocalists of all time. She sold out concerts at Carnegie Hall, starred in hit movies, and gave voice to the African American civil rights movement at a critical time in its development. 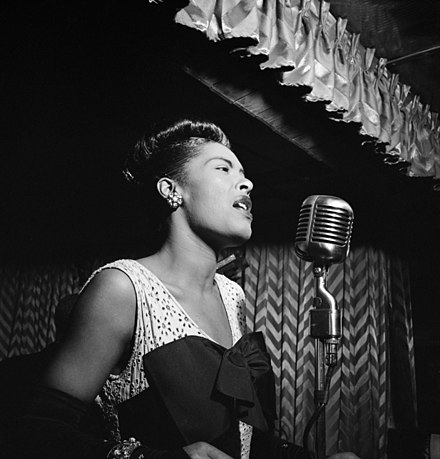 Holiday had a phenomenal run as an entertainer before her death in 1959. While she is in many ways most closely associated with Harlem, where she was discovered, it was in Greenwich Village that in many ways her career was launched and gained newfound prominence.

Her Life and Career

Billie Holiday was born Eleanor Fagan in Philadelphia, PA on April 7, 1915. She had a rough childhood, moving to Baltimore to live with her aunt while her mother worked long hours on passenger trains. Her father also abandoned the family when she was very young. A neighbor tried to sexually assault Eleanor when she was 11, but luckily her aunt was able to fight him off. In 1929, Eleanor moved to Harlem with her mother and became a victim of sex trafficking.

In her difficult early life, Holiday found solace in music, singing along to the records of Bessie Smith and Louis Armstrong. In an effort to escape her tumultuous childhood, Eleanor began her singing career young as a teenager in Harlem nightclubs in 1929. She went by the stage name Billie Holiday, inspired by the actress Billie Dove and the musician Clarence Holiday. Holiday was discovered at Covan’s, a Harlem venue where she had a residency as the lead singer. Known for her distinctive phrasing and expressive, sometimes melancholy voice, Holiday went on to play and record with the leading jazz instrumentalists of the time such as Duke Ellington, Louis Armstrong, Teddy Wilson, Count Bassie, and many more. Some of her most notable works include”T’ain’t Nobody’s Business If I Do,” “My Man,” “God Bless the Child,” and “Strange Fruit.”

Holiday married James Monroe in 1941. Already known to drink, Holiday picked up her new husband’s habit of smoking opium. The marriage was rocky, and they divorced in 1947, but Holiday’s problems with substance abuse continued. After the death of her mother in October 1945, Holiday began increasing her substance abuse to ease her grief. On July 17, 1959, Holiday died from drug & alcohol-related complications. After her death, she received 4 Grammys, had her autobiography (Lady Sings the Blues) turned into a hit film starring Diana Ross, and was inducted into the Rock and Roll Hall of Fame. 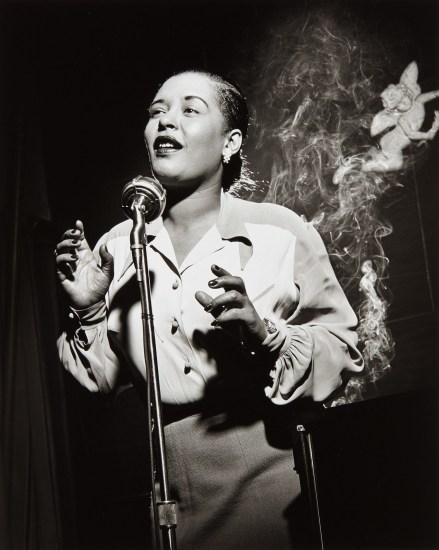 Several critical developments in Holiday’s career took place in Greenwich Village.  As previously mentioned, Holiday was discovered singing in a jazz club in Harlem.  The man who discovered her and launched her career was Greenwich Village resident John Hammond.  Hammond, a young music producer at the time (but who would go on to play a key role in integrating the music industry and in launching the careers of Bob Dylan, Bruce Springsteen, Aretha Franklin, among many others) was immediately entranced by Holiday’s unique vocal abilities.  Hammond asked Holiday to come down to the Columbia Phonograph Recording Studios at 55 Fifth Avenue (extant — today the Cardozo Law School building) to cut what would be her very first recordings. 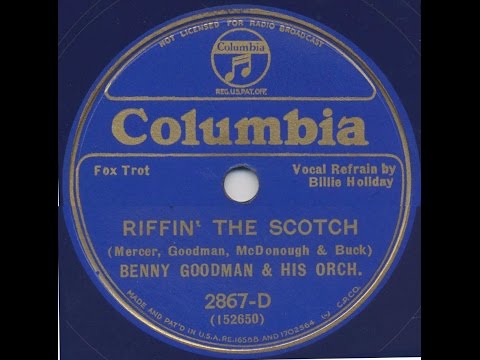 She joined Hammond for three recording sessions at 55 Fifth Avenue, on Nov. 27, Dec. 4, and December 18, 1935.  In those history-making sessions she sang with Benny Goodman and his Orchestra, in one of the first integrated recordings ever made.  At Columbia she recorded “Your Mother’s Son-In-Law” and “Riffin’ the Scotch.”  This was the beginning of a long musical recording career for Holiday which included over a dozen albums. 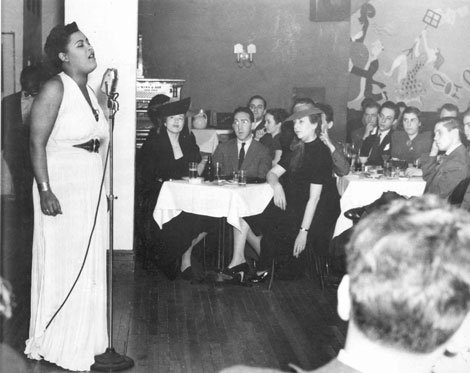 Not long after her Columbia recording sessions, Holiday rose to even greater prominence by introducing the song with which she is perhaps most closely associated,  “Strange Fruit” at a basement venue called Cafe Society on Sheridan Square in Greenwich Village.  The song, originally written as a poem by Abel Meeropol in 1937, is a seering protest of American racism, state-sanctioned violence, and systemic indifference. The song quietly rages against the systems in place at the time that kept races divided and black Americans perpetually behind barriers. When Cafe Society opened in 1938, it was the first racially integrated nightclub in the entire city. Patrons came to Cafe Society to mix and mingle among people who may be wildly different than they – but who all enjoyed a communal, collaborative atmosphere and top-notch musical performances.

A year after the cafe opened, Billie Holiday, who often performed there, delivered that famous first rendition of “Strange Fruit.” Her choice to perform this song was truly revolutionary, and she later said in her autobiography that, even among a progressive audience, she was nervous about the reaction. Protest songs, as a genre, did not exist yet’ and “Strange Fruit” was a doozy of a protest song. “There wasn’t even a patter of applause when I finished,” she wrote. “Then a lone person began to clap nervously. Then suddenly everybody was clapping.” It’s hard to imagine how striking this performance must have been to the Greenwich Village audience – much of the city (not to mention the country) did not even allow blacks and whites to be seated at the same table, let alone listening together to a song so boldly decrying the country’s legacy of racial injustice.

Though Holiday enjoyed great success and her talents garnered widespread plaudits, she struggled with her demons of addiction and fraught romantic and personal relationships. These demons often sidetracked or even derailed her career, and she faded from public view for significant periods of her life. 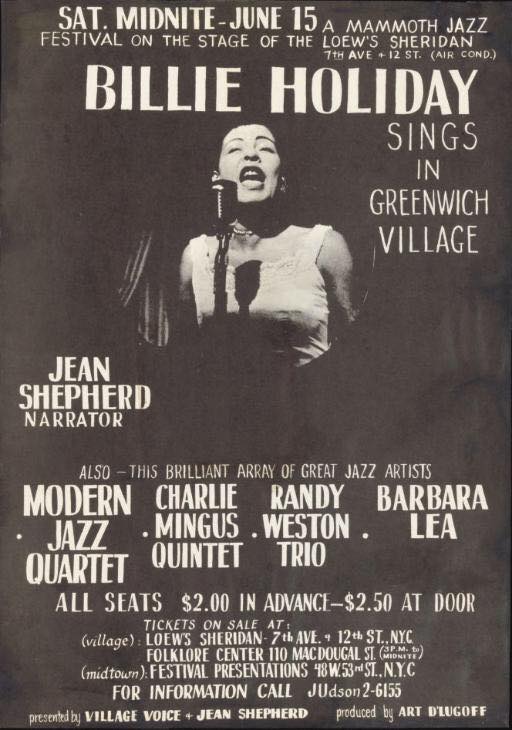 But towards the end of her life she maintained a busy performing and recording schedule.  One of those more memorable shows took place at the old Loew’s Sheridan Theater, located at 12th Street, Greenwich Avenue, and 7th Avenue, where Holiday performed with Charles Mingus and Randy Weston.