An Instagram follower recently asked us for clarification about an image we posted from our historic image archive of the long-demolished former home Our Lady of Pompeii Church.  She wanted to know exactly where the church was located, and which streets could be seen in the image.

Sounds like a simple enough request, right?  But something about the image just didn’t line up with what we thought should be there.  To finally find the answer, we had to go down a rabbit hole of historic images and maps, which tell us a lot about how to perform historic building research, and how our neighborhoods’ streetscapes have changed over the years.

The building in question had the address of 210 Bleecker Street, and we knew was located near the intersection Bleecker and Downing Streets.  It was a beautiful Greek Revival structure built in 1836 for the First Unitarian Universalist Church.  That congregation moved uptown a few decades later, and in 1883 the church became the home of the congreagation of St. Benedict the Moor, the first black Catholic church in the North, located in what was then the heart of New York’s African American community, Greenwich Village’s ‘Little Africa.’  This African American parish’s taking over the church building was in part the result of the efforts of Father Thomas Farrell, the Irish-American pastor of nearby St. Joseph’s Church, whose 1880 will said “I believe that the white people of the United States have inflicted grievous wrong on the colored people of African descent, and I believe that Catholics have shamefully neglected to perform their duties toward them. I wish, then, as a white citizen of these United States and a Catholic to make what reparation I can for that wrong and that neglect.” With this he left five thousand dollars to found a new parish for the city’s Black community.  Farrell had to stipulate that if the Archdiocese of NY didn’t use the $5,000 for this purpose, the money would go towards a Protestant orphanage, forcing church leaders’ hands.

In 1898 the city’s African American community was moving uptown as the neighborhood’s Italian immigrant population was rapidly expanding, and the church at 210 Bleecker Street was taken over by the newly-incorporated Our Lady of Pompeii parish as their first permanent home.  They remained here until the early 1920s when this and scores of other buildings were demolished to make way for the southerly extension of Sixth Avenue from its prior endpoint at West Third Street, a few blocks north of here, to connect it to Church Street in Lower Manhattan.  After the demolition, the parish built the landmark church which to this day stands at the corner of Bleecker and Carmine Streets.

Problem was, one of the images also showed a third street surrounding the church which shouldn’t have been there. Looking at a map of the area today, you can see there is no other street that would make sense at that angle and location other than Sixth Avenue, which never co-existed with the church, and was many times larger than the small road shown anyway. This was a bit of a mystery.

To try to solve it, I first looked elsewhere in our historic image archive to see if any other images might provide any clues. Using our Historic Image Archive Map I found several in the area, but none really helped; if anything, they confused things. One image showed the dramatic breadth of destruction which emanated from the construction of the Sixth Avenue extension. Another showed an old image of a nearby tenement at what is now 270 Sixth Avenue between Bleecker and Houston Street which clearly pre-dated the extension of Sixth Avenue through theses blocks, but paradoxically the building faces what is today the post-1926 extension of Sixth Avenue even though it was not built until decades after the building.  Great; now there were TWO mysteries to solve.

I then checked the other great source for New York City historic images, the NYPL’s OldNYC.org site.  Unfortunately I hit a dead end there too; all their images for that intersection dated to AFTER the construction of the Sixth Avenue extension and the demolition of the old church.

But the NYPL had one other resource we often use with building research that can sometimes provide helpful clues: their collection of historic maps which spans centuries of New York City history. And while some of those maps only show streets or just some streets in an area, and in some cases the maps can be more impressionistic (ie an artistic view) than cartographic, others show fine detail about buildings on each block. It seemed worth a shot.

Bingo. A review of maps from around 1900 showed that before the Sixth Avenue extension in the mid-1920s, there actually used to be a one-block long north/south street between Bleecker and Houston Street, roughly where today’s Sixth Avenue extension runs (but much narrower and shorter) called Hancock Street. While the Sixth Avenue south extension mostly just tore through blocks and destroyed scores of buildings in its path, here it actually subsumed this small existing street, along with a several buildings around it, including the old church. 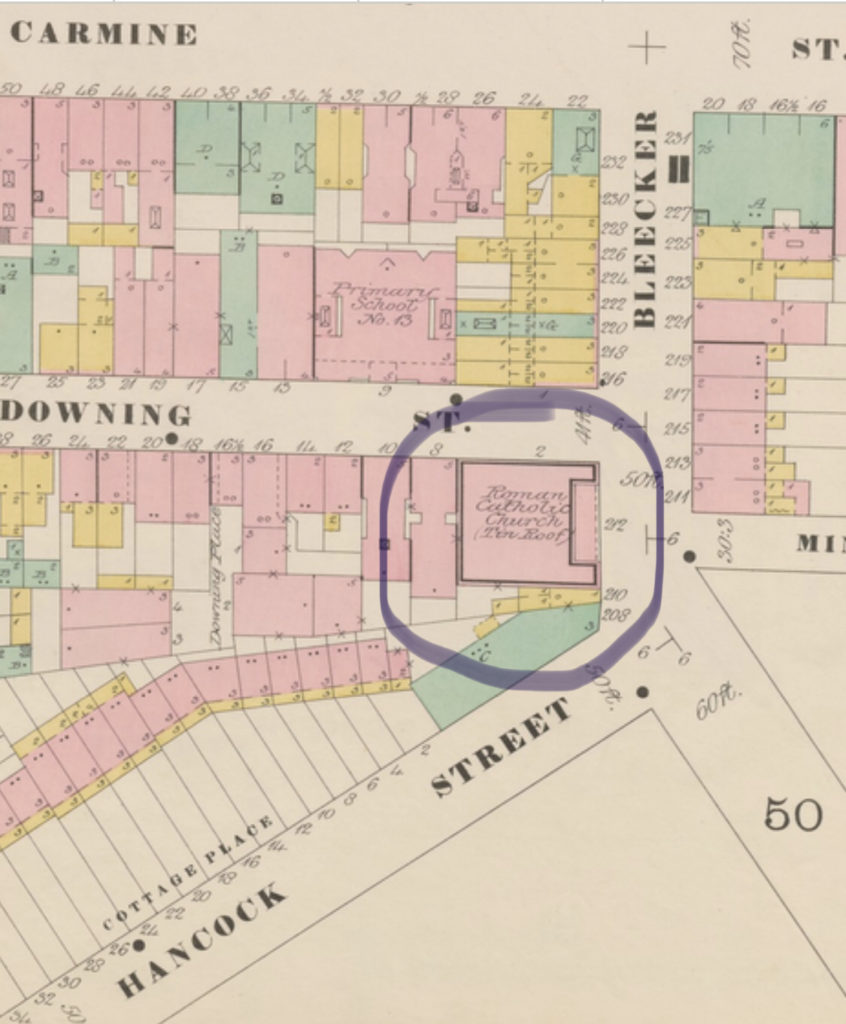 While this discovery seemed to explain both mysteries, they were not 100% proof. For that, digging a little deeper into the NYPL’s map collection did the trick. A late 19th century map actually identified the church as the structure on the block bounded by Bleecker, Downing, and Hancock Street, while an early 20th century map showed a 6-story building on the east side of Hancock Street at the location where the 6-story 270 Sixth Avenue now stands — for all intents and purposes proof of the veracity of this theory as well. And if there was any doubt, if you look very closely in one of the historic images, you can see a street sign on one of the streets adjacent to the church that says “Bleecker,” while in another, too small to fully make out, there’s a street sign which, while not fully legible, when blown up seems to say “Hancock Street.” 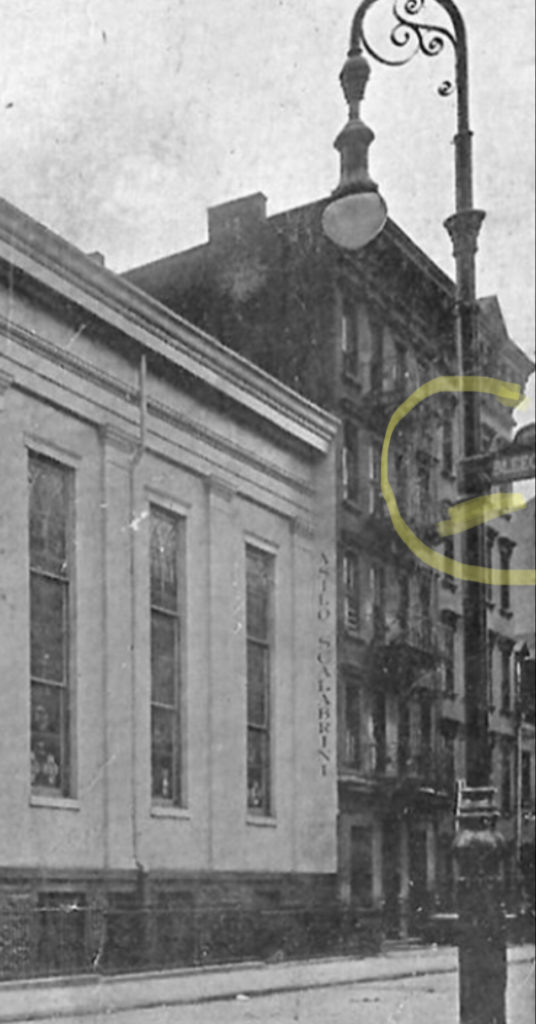 So the old Our Lady of Pompeii Church, built in 1836 and destroyed about 90 years later, would have stood more or less in the middle of today’s Sixth Avenue, just west of the plaza in front of Little Red Schoolhouse, with Bleecker Street on one side, Downing on another, and the long-gone one block-long Hancock Street on the third.