Each year, Village Preservation honors the invaluable people, businesses, and organizations that make a special contribution to our neighborhoods at our Annual Meeting and Village Awards. On June 17th, 2020 we will be celebrating nine outstanding awardees at our— RSVP here to participate virtually.

George Cominskie is a beloved longtime West Village and Westbeth community activist, having lived in the latter since 1983. George was President of the Westbeth Artist Residents Council (WARC) from 1989 to 1992, from 2002 to 2010, and again from 2012 to 2018. Working with WARC and Village Preservation, George helped lead the charge for expanded landmark protections in the Far West Village, including of Westbeth, and to stop inappropriate development in the surrounding neighborhood.  George has been a tireless advocate for the residents and artists of Westbeth, and for keeping Westbeth a an affordable and well-functioning community.  Especially as Westbeth, which opened on May 19, 1970, celebrates its 50th anniversary, we are proud to honor George as a Village Awardee this year. 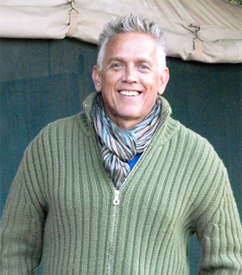 During the COVID-19 crisis, George is running the Emergency Response Committee at Westbeth. They have organized floor captains and food and pharmacy runs for residents who can’t get out themselves. This isn’t George’s first crisis, as he also helped lead Westbeth and its residents through the incredibly difficult recovery from Sandy, when the lower floors of the complex where residents’ artworks were stored were flooded and many apartments had to be evacuated for long periods of time.

George has a deep and loyal following among Westbeth and West Village residents for his many, many years of activism and community service. George lives at Westbeth with his husband, John Turner. The West Village was a much different place in the 1980s when they moved in, and George volunteered on efforts to improve the community and keep it safe. In addition to his community and Westbeth work, he has been very active with God’s Love We Deliver, AIDS Ride, and the Elizabeth Glaser Pediatric AIDS Foundation.  He is also an extremely nice guy which makes him a pleasure to work with.

George jointly organized with Village Preservation the first Westbeth Artists Loft Tour (see also here and here) which was a unique opportunity for the public to access the incredible spaces and artwork found at Westbeth, and for the artists who live there to share their art with the public. They have re-envisioned this tour into an annual Open House NY tour in which 2,500 people visit Westbeth over a two-day period. George also serves on an advisory committee of The Whitney Museum of American Art and Pier 55.

George feels that his greatest contribution to the Village has been the promotion of the arts and artists of Westbeth. He has been involved in many programs and events including WestFest Dance Festival, PEN Literary Quest, Westbeth Gallery Shows, and advocating for expanded arts programming and social services at Westbeth, the landmarking of Westbeth and much of the surrounding neighborhood, and has served on more advisory committee than we could list here.

We are honored to present George with a Village Award and recognizing him as our special Regina Kellerman Award Winner, which highlights one awardee each year for their role in community and historic preservation. Please RSVP here to participate in the award ceremony at 6pm on June 17 virtually.