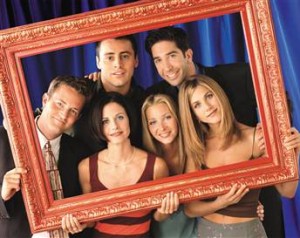 Sound familiar? That’s either because you recognize the opening lyrics to the theme song from Friends, or because it describes your life.  The latter may not pertain to our older, more established readers, but there’s no doubt all of us (Villagers included!) have been there at one point or another.  That’s why the sitcom about six friends trying to get their lives together while living (and drinking lots of coffee) in Greenwich Village was so relatable during its ten-year run: Chandler Bing hated his job as a “data analyst,” Joey Tribbiani tried to make ends meet in every way from donating sperm to dressing up as a Christmas elf, and Ross was divorced three times.

Today marks the date Friends debuted in 1994.  Since we’re not above looking at our neighborhood through the lens of popular culture (see prior posts on Seinfeld or 80’s music videos), we decided to take a trip down memory lane, check out some of the neighborhood sites the friends supposedly frequented, and see just how true-to-life the show actually was….

The opening credits feature the six friends frolicking around a fountain in a park.  Many non-New Yorkers assume this was Central Park.  Alas, though, it is nothing more than a stage set in Hollywood. 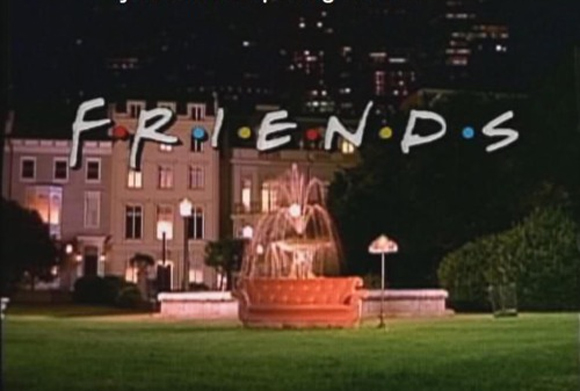 A good chunk of the series took place in Monica’s spacious 2-bedroom apartment.  No. 90 Bedford Street, on the southeast corner of Bedford and Grove Streets, stood-in as the exterior of her building.  She inherited it from her grandmother and lived there with Rachel until she and Chandler shacked up.  Thank goodness for the dead grandmother storyline, because the actual prices in this building are definitely not something a waitress/sometime chef could have afforded.

In today’s market, a one-bedroom in 90 Bedford Street rents for approximately $2,695/month, so we can only imagine what a two-bedroom goes for!  Joey and Chandler, who lived in the same building directly across the hall, resided in a more modest, but nevertheless rather unbelievable space (at that location) for two people of their means.

In the ground floor of their building was the coffee shop, Central Perk, where the gang spent the other half of their time.  There is a ground floor food establishment at 90 Bedford, but Central Perk is a little more down-to-earth than today’s real-life counterpart, the Little Owl restaurant.

During the first several seasons, Ross lived in an apartment in what is shown to be Washington Square Village (for some recent news on NYU’s plans for Washington Square Village, click HERE). In season 4 Ross moved across the street from his sister Monica into the former apartment of Ugly Naked Guy.  Therefore, it is assumed that Ross lived on Grove Street.  He further cemented his Village-ness when he took a teaching  job at NYU (ironically, Washington Square Village is now NYU faculty housing with about 20% of the units still occupied by non-NYU residents who moved in before NYU took over the buildings fifty years ago).  Phoebe lived in an apartment in 5 Morton Street, just a few blocks away from the rest of her friends.

When Monica lost her job as chef at a fancy restaurant in Season 2, she landed a job at a 50s-themed restaurant where employees had to dress the part.  The show used the Moondance Diner as the exterior shot for the place.  From the 1930’s until 2007, the Moondance was an actual diner in SoHo located on 6th Avenue between Canal and Grand Streets.  An unofficial landmark of the neighborhood, it was one of Manhattan’s last freestanding diners (in 2007, it was sold and transported off site to make way for a new hotel development).