With Presidents’ Day, celebrating George Washington’s birthday (among other things) just around the corner, we thought we would take a brief look at one of the Village’s most conspicuous monuments to the nation’s first leader.

The Washington Arch at the terminus of 5th Avenue and Washington Square North has in many ways become a symbol of Greenwich Village. The arch that stands at the northern end of Washington Square Park is actually a permanent version of a temporary memorial constructed for the 1889 centennial of Washington’s first inauguration at Federal Hall in Lower Manhattan.

As the 100th anniversary of the inauguration neared, William Rhinelander Stewart, a wealthy resident of one of the posh townhouses around the square, began campaigning to erect a temporary triumphal arch in the European tradition. He convinced his well-heeled neighbors to help foot the bill and brought on Stanford White, of the famous firm of McKim, Mead, and White, to create the design. The arch spanned 5th Avenue just north of Washington Square.

The temporary arch, created with wood and plaster, proved to be popular and soon a campaign (and more fundraising from neighbors) for a permanent version was underway. By 1890 a new version of the arch was under construction. This version was again designed by Stanford White (who also designed Judson Memorial Church at the south end of the park), who used Tuckahoe marble for the new 30-foot wide arch that was moved slightly south to within the boundaries of Washington Square Park.

It was not until 1916 and 1918 that the two sculptures of Washington himself were added to the northern side of the arch – the one to the left has Washington flanked by Fame and Valor to commemorate his time as general during the War of Independence, and the sculpture on right has him accompanied by Wisdom and Justice, noting his time as president.

The arch and Washington Square Park were all landmarked by the city when it created Greenwich Village Historic District in 1969. 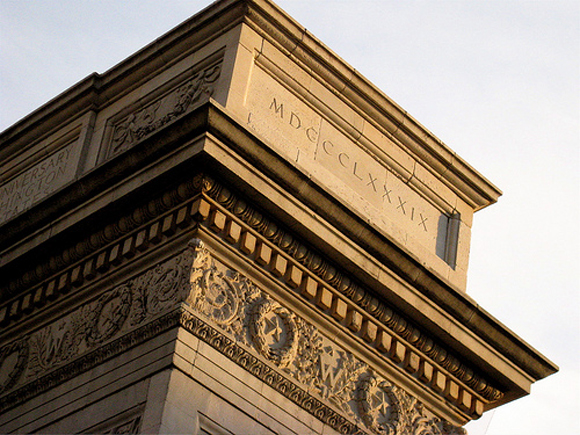