On this day, July 9th, back in 1962, Bob Dylan recorded his song, “Blowin’ in the Wind.” There are many, many connections between Bob Dylan, this song, and the Village, and you can read about some them in this Off the Grid post from two years ago.

Some of the places where Dylan wrote and performed are unfortunately gone now, but some remain. You can actually stand on Jones Street today, and it still looks like it does on the album cover photo for “The Freewheelin’ Bob Dylan.” Well, except for the parked cars;  you probably won’t see an old VW bus there today. And you can go to the place that used to be the Fat Black Pussycat on Minetta Street where he wrote the song.

While we have been losing important pieces of the South Village while fighting to get this neighborhood landmarked, that will hopefully soon be a thing of the past.  Important progress in recent weeks will hopefully help ensure that no more pieces of our neighborhood’s history — whether connected to Bob Dylan, this song, or anything else — end up just “Blowin’ in the Wind.”

If you read that post from two years ago you sense the urgency in pressing for landmark status for the South Village. It hurts to read the names of the places that have already been lost, like the Provincetown Playhouse and Circle in the Square. But things are different now. It’s been a struggle, and it’s been a long time in coming, but we are feeling optimistic about the South Village in light of some recent developments. 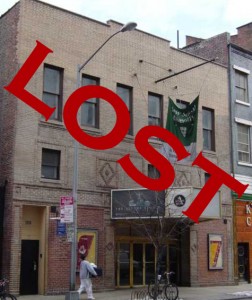 Back in May, three important sites that had earlier been removed from the proposed South Village Historic District (as recommended by GVSHP) were restored by the Landmarks Preservation Commission. These three parcels include several key components of the entire district that, without their inclusion, could allow inappropriate development in this neighborhood.

And more recently, on June 25th, LPC held its only public hearing on this area –   “Phase II” of our proposed South Village Historic District (see map). We are hopeful that when the commission votes later this year, it will be in favor of historic district designation, and the entire district as proposed will be approved. And when that happens we can all be proud of the hard work we put into this fight. You, who wrote letters and testified and attended meetings and who care about the future as well as the past of our neighborhood, made the difference.

It’s time to stop what we can save of our history from succumbing to demolition cranes and wrecking balls. It’s time to save the entire South Village and secure its future as a historic district.