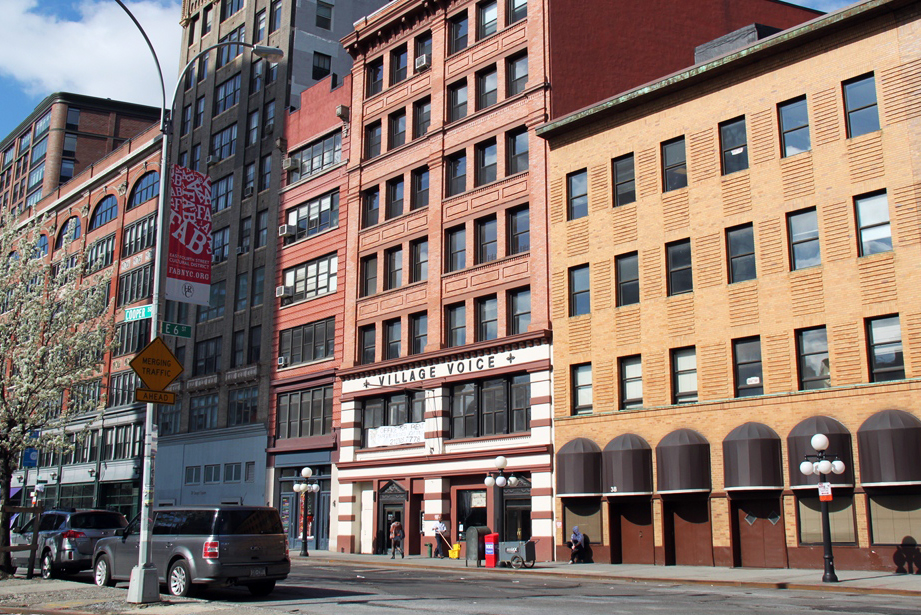 The Villager reported today that the Village Voice has vacated its office at 36 Cooper Square and decamped 80 Maiden Lane far downtown. The Voice, a longtime fixture in our neighborhood, was founded in Greenwich Village in 1955, set up shop in Sheridan Square by the 1960s, and moved to its recent location on Cooper Square in 1991.

The building on Cooper Square that the Voice is leaving was built as a warehouse in 1894 and is part of the landmarked NoHo Historic District. It was constructed with a cast-iron frame covered in sandstone and brick. Over its history, the structure was gradually connected internally with the buildings surrounding it at 32 Cooper Square, 419-421 Lafayette Street, and 38 Cooper Square. By the 1930s, this warren of interconnected buildings formed the home of the growing Hartz Mountain pet supply company – which had its beginnings when a German immigrant managed to sell 5,000 singing canaries to the nearby Wanamaker department store. Eventually Hartz departed the East Village and the spaces were taken over by other commercial tenants.

The Voice space on Cooper Square will reportedly be taken over by Grace Church School, which recently renovated the adjacent 38-50 Cooper Square into a high school space.

2 responses to “The Voice Leaves the Village”