The British poet W.H. Auden, a towering figure of 20th century letters, is not the first person you’d put in a shabby apartment on St. Mark’s Place. Yet there he lived, at number 77, from 1953 until 1972 when he and his lover Chester Kallman left for a cottage at Oxford. He died in 1973.

Wystan Hugh Auden was born on February 21, 1907. Many readers find Auden’s poetry breathtaking. The writer is both erudite and playful, while maintaining a certain modesty, and not just through elegant cadence and rhyme. He was born in York, England, lived in Birmingham, was educated at Oxford, and arrived in America in 1939, becoming an American citizen in 1946. In the introduction to a 1979 volume of “Selected Poems,” Edward Mendelson said that “Auden was the first poet writing in English who felt at home in the twentieth century.” It only makes sense that Auden chose to live on the ragged end of the New World.

The building at 77 St Mark’s Place, just west of First Avenue, is a tenement built in 1845 — originally as a 3 1/2 story house, later expanded to four stories — its architect unknown. Today the facade features a bracketed cornice with a curved pediment and paneled frieze, though the window lintels and sills have been stripped. The restaurant La Palapa occupies the ground floor. Before Auden arrived, the Marxist revolutionary Leon Trotsky also wrote in this building for the Moscow publication Novy Mir (The New World).

In a history of the East Village commissioned by Village Preservation, architectural historian Francis Morrone wrote:

“His apartment at 77 St. Mark’s Place was notoriously disheveled. There were times, his friend Hannah Arendt recalled, ‘when his slum apartment was so cold that the water no longer functioned and he had to use the toilet in the liquor store at the corner, when his suit — no one could convince him that a man needed at least two suits so that one could go to the cleaner or two pairs of shoes so that one pair could be repaired, a subject of an endlessly ongoing debate between us throughout the years — was covered with spots or worn so thin that his trousers would suddenly split from top to bottom.’ Auden, reported Edmund Wilson in his diaries, once said, ‘I hate living in squalor — I detest it! — but I can’t do the work I want to do and live any other way.'” 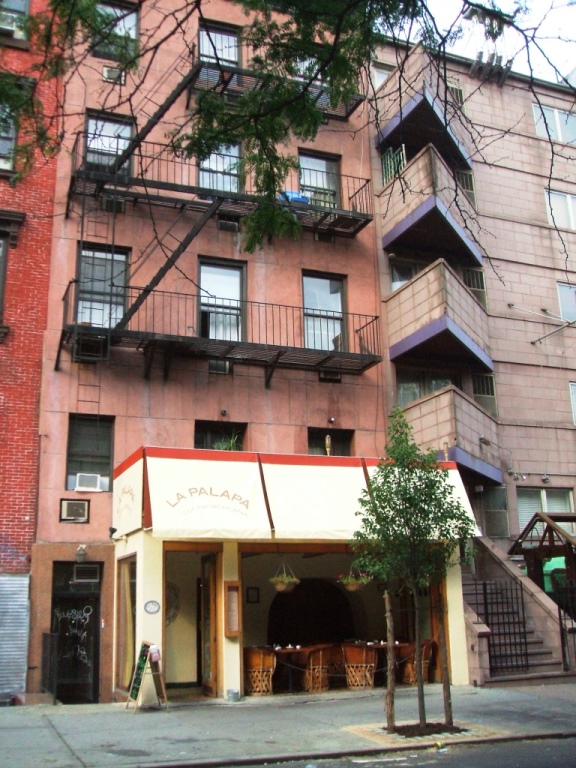 Fellow artists visited him there anyway, according to this article from The Local, including “T.S. Eliot, Igor Stravinsky, Allen Ginsberg, Hannah Arendt, Robert Graves, Marianne Moore, Christopher Isherwood, and Oliver Sacks, not to mention plenty of gay sailors, practitioners of rough trade, alcoholics, drug addicts, and thieves. (The apartment was forever being robbed.) In that latter sense, at least, Auden belonged.”

Auden was also a devout Episcopalian; his religious feeling intensified as he got older. He was a faithful parishoner at St. Mark’s Church. And despite his Britishness, he was New York’s poet too, perhaps never more so than posthumously, in the days following September 11, 2001. His poem September 1, 1939 — penned on the outbreak of World War II — was rediscovered then and shared widely, providing the balm of a wise and beautiful voice for a hurting public.

No one poem can stand for the man. (You can hear Auden reading his own work here and here.) Because of that impossibility, our own “selected poem” for today will be one that carries the whiff of New York Harbor, to match the note of spring in these end-of-winter days ­– when W.H. Auden’s birthday rolls around.

The sailors come ashore
Out of their hollow ships,
Mild-looking middle-class boys
Who read the comic strips;
One baseball game is more
To them than fifty Troys.

They look a bit lost, set down
In this unamerican place
Where natives pass with laws
And futures of their own;
They are not here because
But only just-in-case.

The whore and ne’er-do-well
Who pester them with junk
In their grubby ways at least
Are serving the Social Beast;
They neither make nor sell —
No wonder they get drunk.

But the ships on the dazzling blue
Of the harbor actually gain
From having nothing to do;
Without a human will
To tell them whom to kill
Their structures are humane

And, far from looking lost,
Look as if they were meant
To be pure abstract design
By some master of pattern and line,
Certainly worth every cent
Of the millions they must have cost.