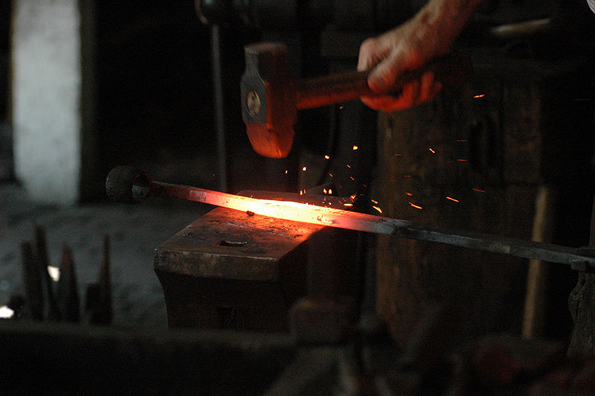 A couple of weeks ago we looked at a variety of buildings in our neighborhoods that at one time served as horse stables, but have since been repurposed. This week, we thought we’d take a look at a building type that is sometimes related to stables and horses (but is also hard to find in the city these days) – blacksmith shops.

The landmark designation reports for several historic districts in our neighborhoods – all of which can be found on GVSHP’s website – reveal the history of several buildings that began life or at one time served as blacksmith shops. These are just some of the locations:

The building lot that holds 33 Cornelia Street was first developed in the early 1830s. But it wasn’t until 1913 that a blacksmith shop was built by Nicholas Serracino for Mary P. Zurla Bresciani. In 1954, the blacksmith shop was converted into a grocery store, and has since reverted to other uses. It can be found in the Greenwich Village Historic District Extension II (South Village) historic district.

Records show that in 1918 a certificate of occupancy was issued for a blacksmith shop on the first story of this building at 16 Minetta Lane in the newly-designated South Village Historic District. Only ten years later, this South Village structure was converted to apartments.

In the 1830s, the east side of Sullivan Street Street (known as Varick Place until the 20th Century) between Bleecker and West Houston Streets in the South Village was developed as a row of handsome Greek Revival rowhouses. Number 181 saw use as a blacksmith shop with apartments above by the turn of the twentieth century. This address is notable as the site of the Sullivan Street Playhouse (converted around 1958), which was eventually closed and converted in 2005 to condos. You can read more about the interesting history of this building in a previous Off the Grid post.

575 Hudson Street in the Greenwich Village Historic District was built in 1849 for George Ackerman, a blacksmith, as his place of business, but the elaborate cornice wasn’t added until years later.

21-25 Jane Street is home to a metalworking shop that actually remains active today! P.E. Guerin, continues to manufacture decorative hardware and other metal works in the West Village. In 2011 GVSHP presented the firm with a Village Award. You can read more here.